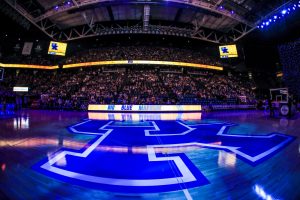 Big Blue Madness is the official start of the University of Kentucky men’s and women’s basketball seasons.  The highly awaited event is the first time that the fans get to see the teams in action. Anticipation is particularly high for the men’s basketball team because the new additions to the roster.  Only three players that played any valuable minutes are returning from last year’s team (Gabriel, Killeya-Jones, and Wynyard) and early reports from team practices say that they have improved. With the talented Freshman coming in such as Kevin Knox, Quade Green, and Hamidou Diallo more curiosity is surrounding this team than past teams.

Mathew Mitchell’s women’s team lost its top two scorers in Epps and Akhator. However, they bring back their third leading scorer Taylor Murray who averaged 12.2 PPG last year and Maci Morris who averaged 11.8 PPG. The chaotic roster turnover that Mitchell had last off season raises big questions marks about how this year’s team will perform.

Big Blue Madness commenced with the women team introductions and the annual dance routine by Coach Mitchell. After a quick shoot-around and a three- point contest, the women took to the court for a scrimmage. After a slow first half, the women hit back-to-back three pointers in the second half ending the game in a white team victory 11-9.

The UK men’s basketball team introductions were once again electrifying. After John Calipari’s speech to a sold-out Rupp Arena audience and the announcement of Drake as an honorary coach, the crowd was ready for the scrimmage and the season to start. During warm-ups, Hamidou Diallo displayed his incredible athleticism by doing an array of slam-dunks.

The first half of the scrimmage began with a quick start. P.J. Washington and Brad Calipari traded back-to-back 3- pointers in the opening seconds. The fast pace would continue throughout the first half. Each team continued to drive the lane and dunk the ball without any defense being played. The second half was not as exciting due to energy they spent in the first, but each team continued to push the ball down the court and score.

There is only so much information that you can gather from a scrimmage like Big Blue Madness, but one thing that stands out about this team is that they are big at every position. They also showed the ability for everyone, including the big men, to run the court with the guards. They will probably, as Calipari has done in the past, switch every player on defense. With so many athletic players on the team this will be an exciting team to watch.