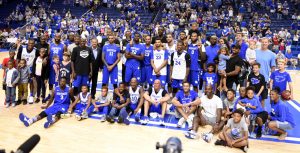 “Jon Hood (2010-14) to Heshimu Evans (1997-99) to Shagari Alleyne (2004-06) for the dunk!” Did you ever think you’d here a line like that?  Imagine if you could choose your dream team of UK Basketball players, from different decades, invite them all back to Lexington and have one historic night at Rupp. That dream came true last night with two amazing games in Rupp Arena.

First up was the UK Legends game where the players that have become household names for any UK fan all took the floor for one more time in Rupp. Players that still subconsciously excite our senses when you hear their names.

Remember any of those guys?  More than likely just reading their names plays a highlight reel in your head. Bobby Perry and Perry Stevenson anchored the White team with their play while Jon hood and Shagari Alleyne led the Blue team.

The second game of the night, the Alumni game, featured current NBA stars as well as a few former UK stars from years past.

This game started with Tyler Ulis taking the tip and immediately making a LONG 3-pointer.  The game went back and forth with 3 pointer after 3 pointer made on both ends of the court.  Big man Demarcus Cousins even got in on the long range action going 1-12 from behind the arc in his 37 minutes of play.  Cousins ended up with 17 points, 5 rebounds, and 2 assists.  Alex Poythress led the way for the Blue team with 28 points, 9 rebounds, and 2 assists.  Derek Anderson also played well and had 25 points and 3 rebounds in the 29 minutes that he played.  Over on the white team, Karl-Anthony Towns led all scoring with 33 points, 8 rebounds and 7 assists in 32 minutes played.  Jamal Murray couldn’t get his trademark 3 to drop going 0-6 from behind the arc but still recording 8 points, 1 rebound, and 2 assists in the game.

In the end the White Team won 115 to 109 but the real winners were the many charities across the bluegrass and the nation that benefited from a total of over $1 Million dollars.  After the game, players and coaches and fans all made their way onto the court for many handshakes, hugs, pictures and autographs.  The UK Brotherhood is strong and nights like this just solidify those bonds.