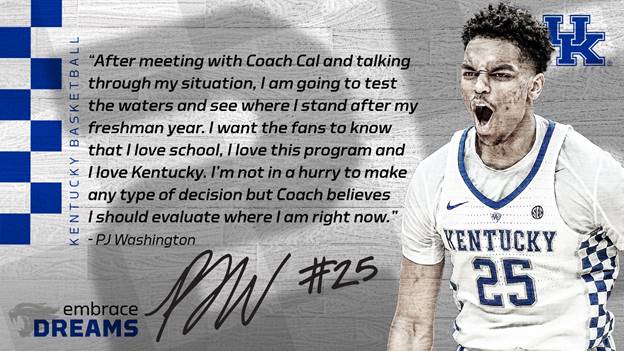 Freshman forward from Dallas will not hire an agent

LEXINGTON, Ky. – Kentucky men’s basketball freshman forward PJ Washington announced Tuesday that he plans to submit his name for the 2018 NBA Draft but will not hire an agent. So long as Washington does not hire an agent, he will have until May 30 (10 days after the NBA Draft Combine) to make a final decision as to whether he wishes to remain in the draft or return to Kentucky.

“After meeting with Coach Cal and talking through my situation, I am going to test the waters and see where I stand after my freshman year,” Washington said. “I want the fans to know that I love school, I love this program and I love Kentucky. I’m not in a hurry to make any type of decision but Coach believes I should evaluate where I am right now.”

Washington is the first underclassman from the 2017-18 Wildcats to declare for the 2018 NBA Draft, which will be held June 21 at the Barclays Center in Brooklyn, New York.

“PJ and I met and talked this week about his future and the process that he would be able to go through if he chose to,” UK head coach John Calipari said. “I think it’s very important that each kid understands where he stands at this point in the eyes of professionals. He’s improved physically and mentally. His ability to play winning basketball isn’t even close to where it was at the beginning of the season. I’ve seen a tremendous growth in all those areas. Like all these kids, I would like to continue to coach PJ, but I’m going to support him as he goes through this process.”

Should Washington choose to remain in the NBA Draft, he will certainly draw plenty of interest after a productive freshman year that was capped with his best play of the season.

Washington scored in double figures in 11 of the final 12 games of the season, including a double-double in UK’s season finale vs. Kansas State. Washington recorded 18 points and grabbed a career-high 15 rebounds for his team-high third double-double of the season. He pulled in at least five rebounds in all but one of those games as well.

During that 12-game stretch, Washington averaged 12.9 points and 6.8 rebounds per game while shooting 57.6 percent from the floor. UK went 9-3 during that stretch, including winning the Southeastern Conference Tournament championship.

Washington averaged 10.8 points and 5.7 rebounds for the season. He led the team in total rebounds with 211 boards, plus he added 31 blocks. Twice Washington scored 20 or more, netting 20 vs. Monmouth on Dec. 9 and 22 vs. Mississippi State on Jan. 23.