UK Basketball – Cats Hang on to Defeat the Trojans 70-62 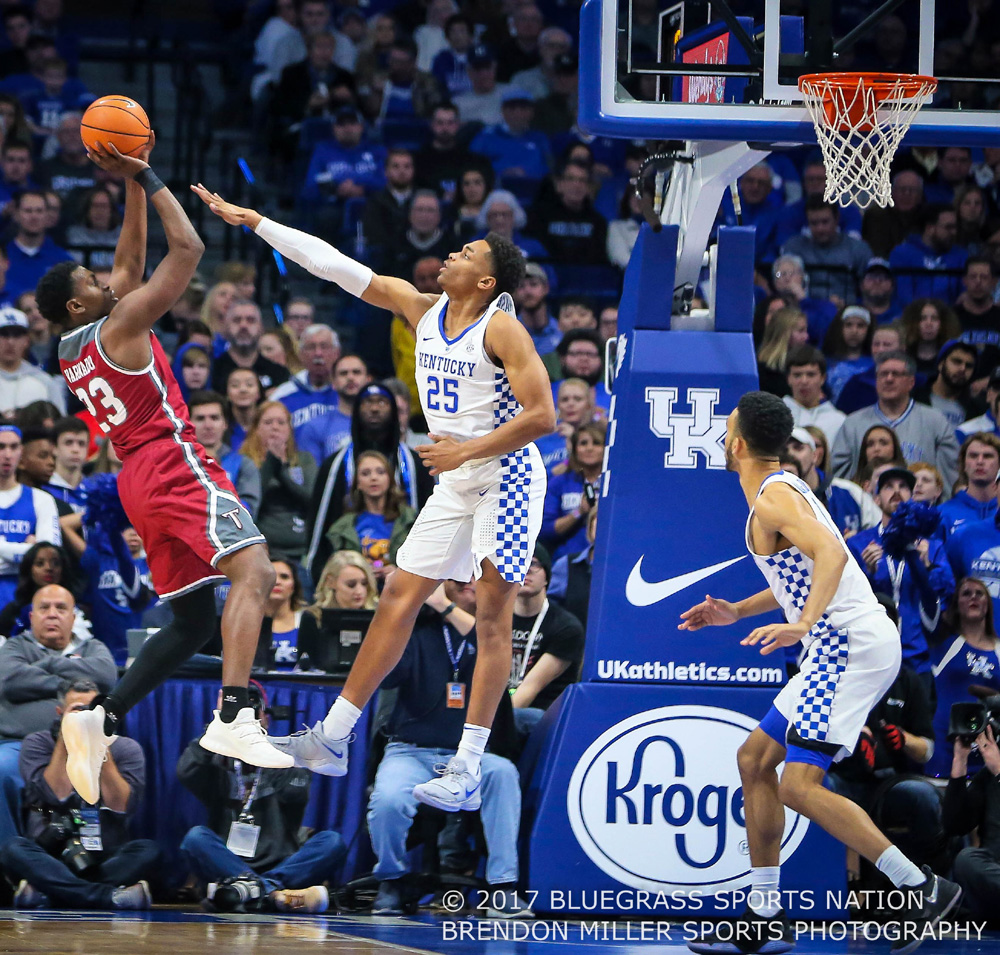 UK squeaked by the Troy Trojans. Photo by Brendon Miller

The Troy Trojans were looking to upset the more talented Kentucky Wildcats in a Monday matchup in Rupp Arena. The much more experienced Troy team battled the entire game and made the game uncomfortable for the fans in attendance.

The first half of the Kentucky Troy matchup started with Nick Richards scoring the open basket. Richards look as if he was going to have a big game grabbing four rebounds in the first 4 minutes of the game, but he only played four minutes in the first half because of two quick over-the-back fouls. The game would continue with scoring droughts for both teams. Troy went scoreless for four and a half minutes (0-7) while Kentucky went on an eight point run taking the lead 16 to 8.  Kentucky had a scoreless streak themselves going 3 minutes (0-4) without a field goal. The Cats maintained a double-digit lead for most of the first half mostly because of making 8 of their 14 free-throws. Scoring continued to be a problem for the Wildcats ending the half without a field goal for four and a half minutes until Wenyen Gabriel hit a 3-pointer with 16 seconds left in the half. After a Troy turnover Quade Green hit a jump shot at the buzzer to give Kentucky a 41 to 25 lead at the half.

The second half of the game began with a Kentucky turnover that allowed Troy’s Kevin Baker an open layup. The Wildcats could never completely pull away from Troy. The Cat’s drove the lead to 21 twice before going five and a half minutes without a field goal and shooting 1 for 10 to end the game. This allowed Troy to pull within 8 with one-minute left in the game. After a terrible performance in the second half Kentucky defeated Troy 70 to 62.

Troy’s terrible shooting from behind the arc (4 for 27) contributed to Kentucky’s win. A couple more made three-pointers may have changed the outcome. Kevin Knox led the Wildcat’s in scoring with 17 points. The Wildcats ended the game with 16 turnovers, while only forcing Troy to turn the ball over 6 times. This must be correct if the young Cats want to continue to win games. Kentucky will play Fort Wayne on Wednesday at 8 p.m. The game will be televised on the SEC Network.