UK Basketball – Just as expected – By Kevin B. Conley 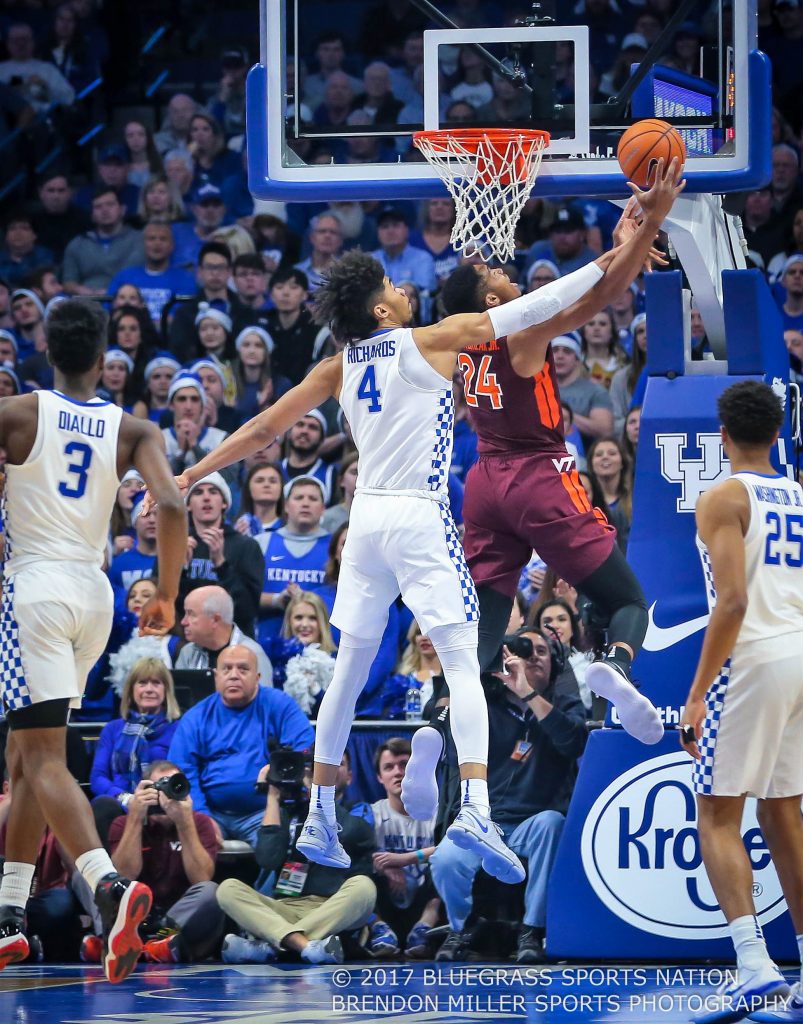 LEXINGTON, Ky. – Very rarely does a game play out as expected. The narratives that dominated the conversation prior to tipoff often disappear as the realities of the court replace conjecture and speculation with cold hard facts.

Few would have argued the contention that 3-point shooting could be the difference in Kentucky’s game against Virginia Tech. However, a spirited discussion likely would have evolved had one suggested that it would favor the Cats. But, such was the case as the Wildcats improved to 9-1 on the season with the 93-86 win over the Hokies.

Virginia Tech entered Saturday’s game with Kentucky averaging more than 10 made 3-point baskets per contest while holding their opponents to just over six per game. The Hokies held true to form in the first half, hitting on 7 of 12 attempts from beyond the arc – on pace to exceed their game average. However, the Wildcats matched Virginia Tech shot-for-shot, hitting 7 threes of their own on 13 attempts while nearly doubling their season average of 4.6 per game.

Kentucky Head Coach John Calipari credits his halftime suggestions as the motivating factor for the second-half defensive turn around.

Over three minutes ticked off the Rupp Arena scoreboard before the Wildcats managed to put the ball through the basket and with 16:50 remaining in the first half found themselves down 5-0 to one of the best 3-point shooting teams in the nation. However, the Cats responded, scoring the next seven points in :49 to take an early 7-5 lead.

From that point in the game until the 3:30 mark of the first half, both teams enjoyed leads of three to five points. Then Virginia Tech went on a 10-0 run, culminating in an 8-point lead, 47-39, with 1:06 left before halftime. Shai Gilgeous-Alexander score with :09 remaining to cut the deficit to six at halftime, 47-41.

The Hokies started quickly to start the second half as Justin Robinson scored with just :07 off the clock to push the lead back to eight, 49-41. The teams traded baskets until Kentucky, trailing, 51-44, went on a 10-0 run to take the lead for the first time in the second half, 54-51.

Calipari considered this win an important milestone in the season, pointing to the experience gained from this game.

“Do we learn how to win in close games…that’s why this game was important to us,” Calipari said.

He also dismissed the notion that Kentucky is not receiving the respect it deserves.

Despite the loss, Virginia Tech Head Coach Buzz Williams has no regrets about playing the Wildcats in Rupp Arena.

Williams believes that the hostile environment will help his team in the tournament selection process, but realizes that others can’t quite understand why he agreed to play in Lexington.

“It’s so – ‘why are you doing that Buzz you are the only ACC coach doing it,’” Williams said. I’ve made a living doing that, I like those.”