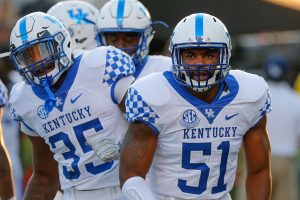 UK defeats SC on the road – Photo by Michael Huang

Ty Back – Columbia, SC
Mark Stoops and the Kentucky Wildcats traveled to Columbia South Carolina Saturday to take on the South Carolina Gamecocks in a packed, blackout at Williams-Brice Stadium.  This would be Kentucky’s first game of SEC game of the year in one of the tougher stadiums in the SEC but UK proved up to the test.  After two sub-par games to start the year, the UK fan base was a little uneasy going into Saturday.  Questions about play calling were heard everywhere.  Questions like, “Is Gran going to continue to run the Wildcat?”, “Will Lynn Bowden live up to the hype?”, “Can UK compete with the tough opponents of the SEC?”

Kentucky chose to keep the kickoff away from South Carolina star Deebo Samuel and the Gamecocks started the first drive of the game at their 32-yard line.  One play later, QB Jake Bentley found Deebo Samuel over the middle and Samuel for an eventual 68 yard touchdown, sending the 82,493 in attendance into a frenzy and BBN into near cardiac arrest.  South Carolina would miss the extra point leaving the score 6-0, USC.

Offensive Coordinator Eddie Gran dialed up the Wildcat with Lynn Bowden in at QB.  A high snap led to UK’s second turnover of the game, giving the Gamecocks the ball on the Kentucky 38 yd. line.  The teams then traded turnovers when UK’s Mike Edwards intercepted a Jake Bentley pass on the 14-yard line.  Kentucky’s defense didn’t let the first play of the game rattle them.  Coach Stoops said, “We take a shot right on the chin to start the game, the place is going wild and we embraced it.”  Credit goes to the defense for stepping up in this game.  Coach Stoops done a great job at managing the game and simplified the defense all while confusing the Gamecocks.  UK’s biggest defensive stat of the game was that they held USC to 3 of 12 on 3rd downs, coming up big and getting the ball back 9 times.  UK also held USC scoreless 6 times in UK territory.

Coach Gran and the offensive unit dialed up plays that allowed Kentucky to sustain drives.  Drives that would eventually end in points and points are what win games.  Once the Wildcat was run consistently, it worked, something I didn’t think I would ever say. Stephen Johnson managed the game and the clock to perfection and once UK righted their ship, they never looked back the entire game winning 23-13.

This was a different team than we saw the previous two weeks.  This was a team that showed poise in the face of adversity on the road, and stepped up big on defense.  And a team that managed to move the ball with a diversity of plays that kept USC guessing the entire game.

Austin MacGinnis made a 27-yard field goal in the third quarter and also made 44- and 21-yard field goals in the fourth quarter.  He also hit both of his extra-point tries.