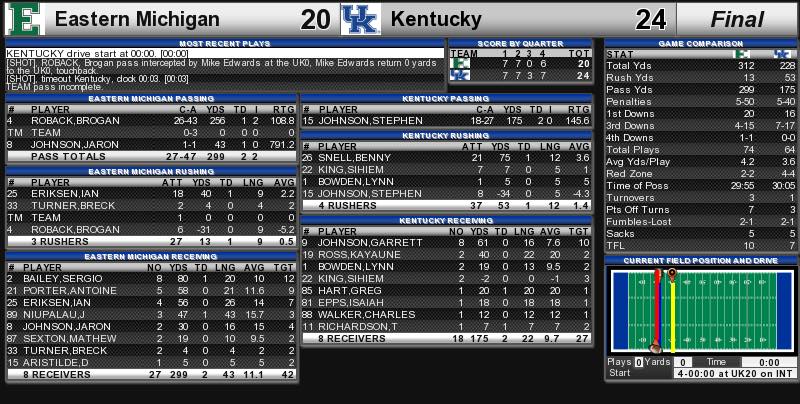 Ty Back – Lexington
Coming off a disappointing one-point loss to Florida, the Wildcats played host on Saturday to an Eastern Michigan team that came into the game 2-1.  Big Blue Nation grieved all week about the one that got away and hoped that tonight’s results would help solidify their confidence in the Cats. 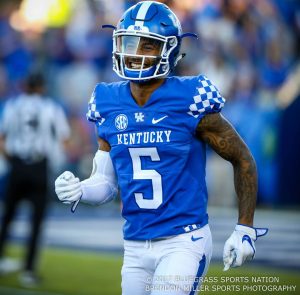 Kentucky got the ball to start the game and on the first play Quarterback Stephen Johnson’s fumble turned the ball over to the EMU Eagles.  While it’s never a good for your first fumble of the year, this was the worst.  EMU recovered the fumble on the 20-yard line of Kentucky and in one play EMU QB Roback found WR Bailey in the end zone and put EMU on top 7-0 with just 15 seconds gone off the clock.  Frustration filled the commonwealth and Kroger field.

On their next possession Kentucky drove 75 yards for the score when Stephen Johnson found Greg Hart on a 20 yard pass to tie the game.

The rest of the night was hard to watch.  Stephen Johnson was running for his life most of the night and was sacked 5 times for a total loss of 36 yards.  When Coach Stoops was asked about the protection he said, “Not very good. Not very good protection. That’s the bottom line. So we need to protect better.”

At the end of the first half, both teams were eerily evenly matched in not only the score (14-14) but also the stats.

Coming out of the half, play was more of the same as the first half.  The turning point of the game came on a UK punt when the EMU returner muffed the ball and UK fell on it to flip the field in UK’s favor.  Kentucky would kick the field goal and take a 17-14 lead after driving 21 yards in 10 plays.  Neither offense hit for big plays all night.  Up until Benny Snell’s 12-yard TD run with 11:56 to go in the game, the longest run of the game was only 7 yards. By this time Kentucky was up 24-14.

EMU wouldn’t go away.  They took the ball with 4:32 to go in the game, drove down the field and scored but missed the field goal making the score 24-20 in favor of Kentucky.  Kentucky couldn’t run out the clock and EMU would get the ball back with 0:44 seconds to play.  EMU would position themselves to win the game on the final play, but the hail mary was intercepted by Mike Edwards to seal the win for the cats.

The famous quote, “A win, is a win, is a win!” keeps running through my mind.  And that’s true.  The Cats are now 4-1 and narrowly squeaked out a win here at Kroger Field tonight.  As Big Blue Nation, we’ll take it, but it’s not what we wanted to see.  We wanted a big win over EMU.  We wanted to show the rest of the country that we’re Kentucky and we can also play football.  We wanted to come out of this game with some big plays under our belt and be able to forget that loss to Florida last week.  Instead we got a mediocre performance that was won because of special teams play.  It’s not what we wanted as BBN but it’s what we got.  And we’ll take it.

Next week the Cats will host the Missouri Tigers back here in Lexington.  Kickoff is at 7:30 and the game will be televised on the SEC Network.  Be sure to visit Bluegrass Sports Nation on both Facebook and online to get all of the coverage.