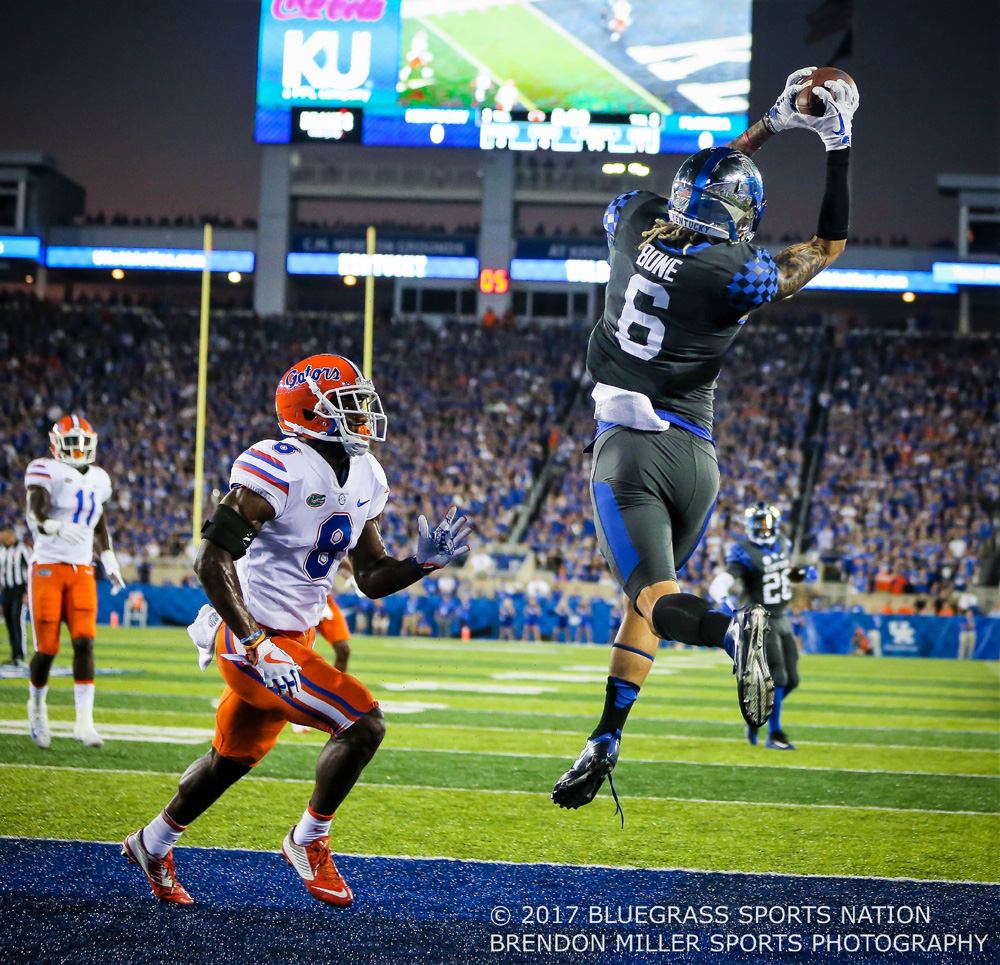 Bone with a great TD Catch – Photo by Brendon Miller

By Ty Back – Lexington, KY

Kentucky would get the ball back to drive to their end zone one last time.  A quick hitter from Stephen Johnson to Garret Johnson for 11 yards and a roughing the passer penalty put UK on the UF 49-yard line.  On 4th and 10 from the 49, Johnson completed a pass to Walker for 14 yards putting UK in field goal range for kicker Austin MacGinnis.  Benny Snell rushed for 10 more yards and Kroger Field could feel it.  All 62,945 in attendance knew that with that run, UK was going to call the timeout, run MacGinnis on the field for the field goal, and celebrate the first win in 30 years over Florida…

Then, a holding call on RG Nick Haynes erased the nice run by Snell and put the ball back on the 45 pushing the ball out of range of MacGinnis and causing the crowd at Kroger Field to go numb.  With only 0:06 left to play, Johnson completed a 6 yard pass to Charles Walker who quickly got out of bounds stopping the clock and spotting the ball on the 39-yard line of Florida.  All of the hopes and dreams of UK fans lay in the leg of MacGinnis and a 57-yard field goal.  The kick was up…and it was…just short, and Florida won by 1 point, 28-27.

The losing streak to Florida now sits at 31 but could have easily been erased if not for mental errors by not only the players on the field but also the coaches on the sideline.  Florida scored two touchdowns with no one covering the wide receivers on both plays.  A quick timeout from the sideline may have changed the outcome of the whole game.  Even Coach Stoops said it, “There should have been a guy there and I should have called it (a timeout)” and “I was fractions off of getting the timeout. So Derrick (Baity) said that he did not see the player out there.”

Kentucky was clearly the better team tonight.  The defense stepped up on big plays all night, the offense made plays when they needed to, and special teams controlled field position for most of the night.  But losing streak aside, this UK team looked like an SEC team that could compete.  This one hurts.  This one is the one you could have told your sons and daughters about.  Instead, this one is the one we’ll all be talking about the last 0:43 seconds of the game.  The last 0:43 seconds that literally turned into another year.

Kentucky Stats for the night: