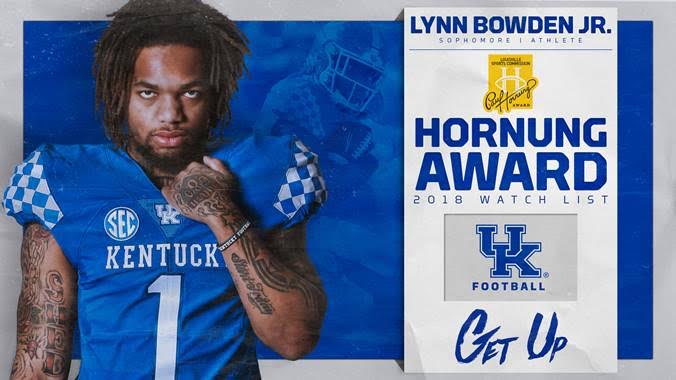 Bowden, who hails from Youngstown, Ohio, is expected to be a force for the Wildcats both as a wide receiver and kickoff returner in 2018. Despite a slows start to his freshman season, Bowden ultimately set three school freshman records for kick returns and was named to the Coaches’ All-Southeastern Conference Freshman Team as a return specialist.

Bowden set UK freshman records for most returns in a season, most returns in a game (7, vs. Louisville) and most kickoff yards in a season. He was named SEC Freshman of the Week on Oct. 9 after piling up 128 all-purpose yards in a 40-34 win over Missouri. Late in the season he had UK’s longest kick return since 2009, a 93-yarder in a win at Vanderbilt that was part of his career-high 192 all-purpose yards that day.

The Hornung Award honors College and Pro Football Hall of Famer Paul Hornung, who is considered one of the most versatile players in football history. He won the 1956 Heisman Trophy as Notre Dame’s quarterback and was the top pick in the 1957 National Football League Draft. The Award is given annually by the Louisville Sports Commission and was created in 2010. Previous winners include Odell Beckham Jr. (LSU, 2013), Christian McCaffrey (Stanford, 2015) and Saquon Barkley (Penn State, 2017).