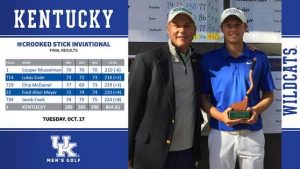 In the process, the Wildcats made even more history which has become a common theme thus far.

In what has shaped up to be the most prolific performance in program history over a three-tournament stretch, the Wildcats just added to their historic pace. They’re now just the second team in the Brian Craig era to win three-consecutive tournaments and just the third team under Craig to win two or more tournaments in a single season. Already they own the score for the lowest single round and the lowest 54-hole tournament score.

“These boys showed me something today coming down the stretch with the tournament on the line,” Craig said. “They showed the kind of moxie and grit it takes to achieve competitive greatness.”

With cool temperatures and wind gusts near 20 miles per hour, Crooked Stick gave everything UK could handle. How did the Wildcats combat the conditions? Musselman.

UK’s senior from Louisville, Kentucky was simply sensational. He fired a 2-under par during all three rounds and overcame a one-stroke deficit heading into the final day to pull away for the win. He dominated the field by five strokes and was one of just four players to shoot under par during today’s final round.

With only Musselman and junior Lukas Euler remaining on the course, the Wildcats trailed North Florida by a stroke. Musselman was steady down the stretch paring each of the final four holes. Euler, however, made up the deficit and pushed the Cats into the lead by birdying two of the final three holes after playing the first half of the back nine at 3-over par.

“What a finish in the clutch by all of these guys, but especially Lukas Euler and Cooper Musselman,” Craig said. “Lukas birdied 16, got up and down for a par on 17 and then made a birdie on 18 when I told him in the fairway we needed it for the win. That is fabulous play in the clutch.”

It took every member of the team to propel UK to victory this week. All five players had at least one round counted towards the team total. Kentucky edged North Florida by a mere stroke, but was seven shots better than third-place finisher Illinois.

“And how about Cooper getting his first win in college golf by five shots?” Craig asked. “I have felt for a while that he was due for a dominating win like this. What a great course to do it on in Crooked Stick. Cooper played like a champion on a championship course and I could not be more proud of him.”

Euler and senior Chip McDaniel earned top-20 finishes for the third-consecutive tournament. Junior Fred Allen Meyer finished in 22nd, while freshman Jacob Cook fired the lowest three rounds of his young career to assist in the winning cause.

The three straight titles ties the 2004-05 team, which also won in three-consecutive events. The 2005 team won six crowns that season, while the 2004 team earned a pair of wins. This 2017-18 squad now has the second-most wins in a single season under Craig with three.

Kentucky has one fall event remaining on its schedule. UK will return to action at the Steelwood Collegiate Invitational in Loxley, Alabama, Oct. 28-29.

Musselman entered the tournament owning nine career top-10 finishes, including both events this season. Throughout his career he had accumulated 41 par-or-better rounds. This week at one of the most esteemed golf courses in the country, he couldn’t have written a more perfect story.

He was the only player in the field to have an under-par round during all three rounds. His victory is the first of his career, bettering a career-best second-place finish from a season ago. And more importantly, his play was the difference in his team taking home another trophy.

During his final round, he came out of the gate firing. He shot 3-under par over the opening nine holes, including birdying the par-four eighth and the par-five ninth heading into the turn. A birdie on the 11th put him at 4-under par for the round. He then hit some turbulence with bogeys on two of the next three holes. With Kentucky needing him to finish the round on a positive note, Musselman steadied his play and pared each of the remaining four holes to preserve not only his victory, but the team’s.

Euler’s play over the final three holes was a difference-maker as well. Through 14 holes, Euler was three shots over par with four to play. With Kentucky trailing by a shot, Euler turned it on and birdied two of his final three holes including a red number on the par-four 18th. His 2-over par final round pushed him into a tie for 14th place to secure a third-consecutive top-20 finish to begin the season.

McDaniel opened the tournament with a 77 before firing a squad-low 69 during yesterday’s second round. He logged a 1-over par during his final round to move into a tie for 19th and a third-consecutive top-20 finish. It is the team-leading 23rd top-20 finish of his career.

Meyer was in the hunt all week for a top-20 finish as well. He had two birdies during today’s final round and finished in 22nd behind a 2-over-par 74.

Cook entered the week having played just one collegiate event. He tied for 75th at Wolf Run, playing as an individual. His lowest round was a 77. After qualifying as UK’s fifth starter this week, he did not disappoint with rounds of 74-75-75 and a career-best tie for 34th as well as a career-low 224 score.

For the latest on the Kentucky men’s golf team, follow @UKMensGolf on Twitter and on the web at UKathletics.com.