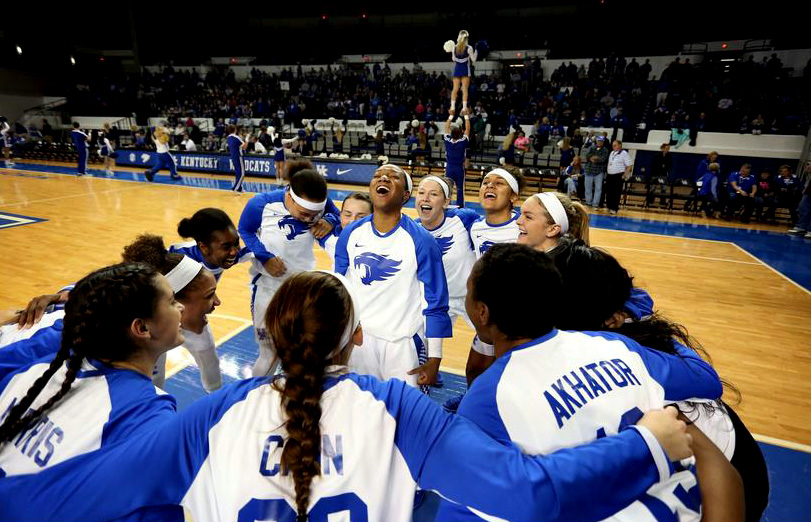 Epps scored 23 points in Sunday’s victory to move past both Pam Browning and Samantha Mahoney for sole possession of fifth place on the UK career scoring list. The senior from Lebanon, Kentucky now has 1,620 career points in her UK career. Leslie Nichols is fourth on the list with 1,797 points.

Kentucky (16-8, 7-4 SEC) also got big efforts from Evelyn Akhator and Taylor Murray. Akhator, a senior from Lagos, Nigeria, had 20 points and grabbed eight rebounds, while Murray, a sophomore from Odenton, Maryland, scored 18 points, dished out seven assists and pulled down five rebounds.

The Wildcats were able to get to the basket with great regularity in the game, scoring 42 points in the paint, compared to just 22 paint points for the Commodores. Vanderbilt did win the rebounding battle, 41-29, but the Commodores only had two more second-chance points than the Wildcats (12-10).

Kentucky also used a half-court, trapping defense to force Vanderbilt into 21 turnovers, which turned into 14 Kentucky points. The Wildcats actually had more steals (11) than turnovers (10) in the game. Murray had five of Kentucky’s steals, while freshman Paige Poffenberger had three.

Kentucky held a 6-5 lead in the second quarter before Vanderbilt went on a 7-2 run to take a 12-8 advantage, prompting Kentucky head coach Matthew Mitchell to call a timeout. From that point, Kentucky outscored Vandy 10-4 to take an 18-16 lead after one period.

The Wildcats missed their first five shots of the second quarter before Makayla Epps scored on a layup with 7:23 left in the half. The good news for Kentucky was that Vanderbilt only managed one basket of its own during that same period of time.

In the second half, Kentucky started slowly once again, hitting just three of its first 11 shots (27.3 percent). And later in the period, when Vanderbilt connected on two straight three-point baskets, the game was tied at 46-46 with 3:00 remaining in the third period. But Kentucky answered with a 9-0 spurt to take a 55-46 lead after three quarters.

Vanderbilt (11-12, 1-9) opened the fourth quarter by hitting consecutive three-pointers again, this time cutting the Kentucky lead to 55-52. But the Wildcats answered with a 7-1 run that essentially put the game out of reach.

Freshman Kayla Overbeck led the Commodores with 19 points, while Christa Reed had 12.

Kentucky returns to action on Thursday when the Wildcats visit Georgia in SEC action. Tipoff is set for 7 p.m. ET and the game can be seen on the SEC Network+.