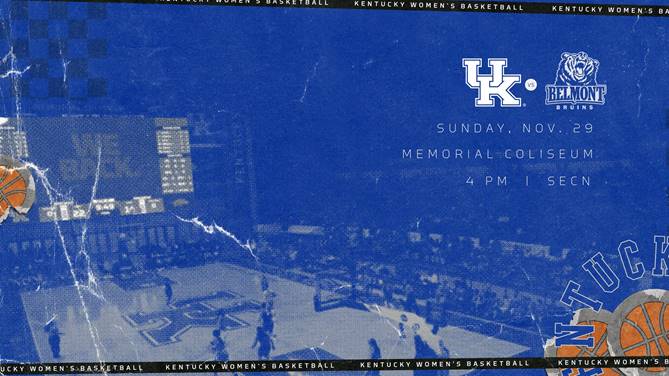 Wildcats and Bruins will square off at 4 p.m. ET on Sunday on SEC Network

After an impressive showing in its season opener Wednesday vs. Murray State, the No. 11 University of Kentucky women’s basketball team welcomes four-time defending Ohio Valley Conference Regular-Season Champions Belmont to Memorial Coliseum on Sunday for a 4 p.m. ET tip.

With attendance limited to 15% of normal arena capacity, the majority of tickets have been sold as full-season packages for women’s basketball and UK does not expect any general public ticket sales at this time. Fans are encouraged to check Ticketmaster.com for any ticket allotments that are returned and released closer to game days, as well as for verified resale tickets. Concession stands at Memorial Coliseum will not be open for service until further notice, due to the mandate on no indoor dining by Kentucky Governor Andy Beshear. Fans will not be allowed to bring food or drink of their own into the venue due to the mandate, which states that masks must be worn at all times.

The game vs. Belmont will be televised on SEC Network with Courtney Lyle and Carolyn Peck on the call. The action can also be seen through WatchESPN on computers, smartphones or tablets. Darren Headrick will have the call on the UK Sports Network on 98.5 FM in Lexington. Live stats and free live audio will be available online at UKathletics.com.

It was an strong season-opening win for Kentucky (1-0) against Murray State on Wednesday, defeating the Racers 86-60. Senior guard Chasity Patterson was the star for Kentucky, scoring 30 points with a career-high six rebounds and eight steals while she added three assists. Patterson went 8-of-13 from the field, 2-of-4 from 3 and 12-of-13 from the free-throw line in the game. Two other Wildcats scored in double figures with junior Blair Green scoring 13 points with four rebounds and hitting three 3s, while true freshman Treasure Hunt scored 12 points in her debut with two 3-pointers.

Overall, all 11 eligible Wildcats played in the game with nine scoring points. UK forced Murray State into 32 turnovers and turned that into 40 points, while also having a 17-4 edge in fast-break points. The Racers dominated the glass against the Wildcats, outrebounding UK 48-43 with a 19-8 advantage in second-chance points. Kentucky led by as much as 36 points in the second half before the Racers fought back to close the gap to 26 at the final buzzer.

UK was without national player of the year candidate Rhyne Howard and two-year starter Tatyana Wyatt in the game as both were suspended multiple games prior to tip. Howard will serve the second and final game of her suspension Sunday vs. Belmont, while Wyatt will be suspended for Belmont and Kansas State before returning to the court.

Sunday’s game will be the season opener for Belmont, who finished 22-9 last season and tied for first in the OVC to earn their fourth straight league regular-season title. The Bruins return two starters from last season’s impressive squad in juniors Conley Chinn and Jamilyn Kinney. Chinn started 29 games averaging 7.9 points per game with 31 assists, 14 steals and 10 blocks, while Kinney played and started 24 games with 8.2 points per game, 99 assists, 36 steals and two blocks.

Sunday’s game will be the sixth all-time meeting between Kentucky and Belmont in women’s basketball. The Wildcats hold the all-time series record 4-1, including a 3-1 mark in games played in Lexington. This will be only the third meeting between the two teams since 1988. The last meeting was March 17, 2017 inside Memorial Coliseum when the Wildcats claimed a 73-70 victory in the first round of the NCAA Tournament. UK does not have a player on its current roster that played in that game. Kentucky’s lone loss to Belmont was Feb. 21, 1976 in Lexington when the Bruins grabbed a 75-60 win.