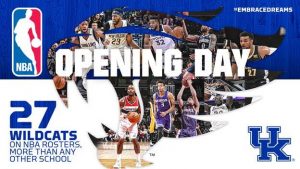 As the 2017-18 NBA season begins Tuesday, a whopping 27 players on NBA opening-day rosters played and finished their college basketball careers at the University of Kentucky, the nation’s most prolific NBA player-producing program in the country. UK’s 27 players are once again far and away the most of any college basketball program.

Duke is in second with 20 former players and North Carolina and Kansas each have 16 on opening-day rosters.

John Calipari has made the statement before that he would like to see every NBA team have at least one Wildcat on its roster and half of the NBA’s annual All-Star Game hailing from the University of Kentucky. The Wildcats aren’t quite there yet, but with each passing season, as the number of UK players playing in the NBA continues to rise, it doesn’t seem that far-fetched. And the sheer volume of Wildcats in the NBA makes it seem plausible.

As a matter of fact, of the 489 players in the NBA to start the 2017-18 season, more than 5.5 percent played and finished their college basketball careers at UK. Seven NBA teams feature multiple Wildcats.

Rondo, now entering his 12th season in the league, is the most experienced Kentucky player in the league, while Bam Adebayo (Miami Heat), Fox and Monk are in their rookie seasons.

Kentucky has experienced unprecedented success at putting players in the NBA under Calipari. In the eight seasons of the Calipari era, 31 players have been selected in the NBA Draft, more than any other school.

Calipari’s players are not only reaching the next level, they are succeeding wildly when they do. In a recent survey of NBA general managers conducted by NBA.com, Towns received the most votes from general managers when asked who they would start an NBA franchise with. It’s the third straight year a Wildcat has been the top choice. Towns was the top vote-getter last year as well and Davis was prior to the 2015-16 season. In that same survey, Towns won the league vote for the breakout player of the 2017-18 season with Davis and Murray also receiving votes.

Davis was named the most valuable player of the NBA All-Star Game a season ago with a record 52 points. Cousins and Wall both also made the game. Davis was also tabbed to the All-NBA First Team while Wall made the All-NBA Third Team for the first time in his career. Murray made the NBA’s All-Rookie Second Team and was the MVP of the Rising Stars Game.

Using figures compiled by basketball-reference.com and spotrac.com, Calipari-coached players only (which includes Rose and Evans but not Meeks or Rondo) have amassed nearly $1.5 billion in career NBA contracts ($1.455 billion). In the eight seasons Calipari has been the head coach at Kentucky, his players have totaled more than $1.09 billion in NBA contracts.

Calipari has had at least one player selected in the top 10 of the draft in each of the last 10 seasons, dating back to his time at Memphis. No other school in the country has had a first-round pick in each of the last 10 seasons. Calipari is the only coach in the history of the sport to have four players drafted No. 1 overall (Rose – 2008, Wall – 2010, Davis – 2012, Towns – 2015).

The NBA season officially tips off Tuesday with two games. Rose and the Cavaliers will host the Boston Celtics at 8 p.m. on TNT, followed by the Houston Rockets and defending NBA champion Golden State Warriors at 10:30 p.m. on TNT.

Wildcats in the NBA