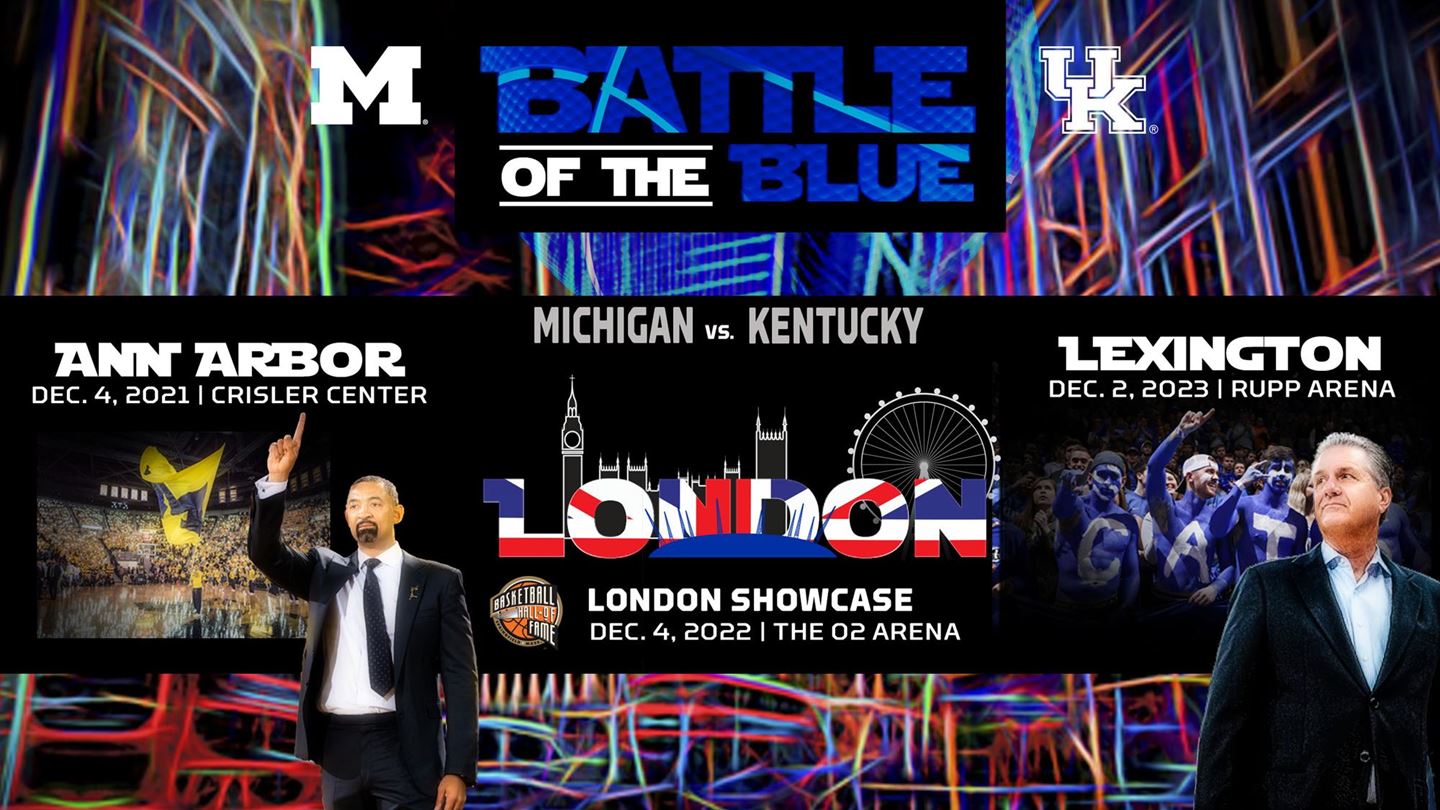 The three-year series will now begin in 2021 at Michigan; London game postponed to 2022

LEXINGTON, Ky. – The much-anticipated three-year series between the Kentucky men’s basketball team and Michigan will go on but has been postponed a season due to safety and health concerns during the COVID-19 pandemic.

The series will now begin in 2021 in Ann Arbor, Michigan, followed by the inaugural Basketball Hall of Fame London Showcase in London in 2022 and a UK home game in 2023. The series was originally slated to begin this upcoming season with the trip to London, followed by a visit to Michigan in 2021 and a Rupp Arena game in 2022.

“I’m disappointed that we aren’t able to go to London this season – I was really looking forward to meeting the Queen – but I’m glad we were all able to come together, figure this out and preserve this series for the future,” UK head coach John Calipari said. “This was a tough decision for the Hall of Fame because we all want to play this game in London, but I support the group’s decision in putting everyone’s health concerns first and pushing a temporary pause on this. The good news is we’re still able to play three great games with Michigan and we will still follow through on the original plan of going to London (in 2022), playing at Michigan (in 2021), and hosting the Wolverines and Juwan Howard, one of the bright young coaches in the game, at our place (in 2023). Our staff is working hard to fill out the rest of our nonconference schedule and I know our fans will be excited about what we put into place.”

The new slate of games for the UK-Michigan series:

The game in London will be televised by ESPN/ABC. Television information for the games at the school sites will be announced at a later time in addition to tip times for all three games.

“As we navigate these unprecedented times, the Basketball Hall of Fame has remained vigilant in placing health and safety above all else,” said John L. Doleva, President and CEO of the Basketball Hall of Fame. “Unfortunately, the unknown combination of health, safety, international travel regulations and the economic viability for all parties involved has required us to postpone this highly anticipated event at The O2. We look forward to hosting a fantastic event in 2022.”

With the Michigan game postponed, the Wildcats currently have dates set with eight opponents for the 2020-21 season.

Other nonconference matchups for this upcoming season will include the annual rivalry game vs. Louisville and the annual SEC/Big 12 Challenge. A date has not been finalized for the former and an opponent has not been determined for the latter.

The nonconference schedule will give way to the typically difficult Southeastern Conference slate. The league schedule has not been announced yet, but UK will play its permanent home-and-away opponents of Florida, Tennessee and Vanderbilt twice, plus host and visit two additional league opponents. The Wildcats will face the remaining eight SEC opponents once.

The league has earned 15 berths in the last two NCAA Tournaments, the conference’s best two-year stretch. The SEC was slated for another impressive haul last season until the COVID-19 pandemic canceled the postseason.

Kentucky will take on that difficult schedule with what will be one of the most inexperienced rosters of the Calipari era. UK will be tasked with replacing 94% of its scoring from last season – most of the Calipari era – 92.4% of its minutes, 84.4% of its rebounds, 92.0% of its assists and 91.5% of its blocks.

The Wildcats are bidding farewell to eight of their top nine scorers from a season ago, including all five starters. The lone major returning contributor from last season will be sophomore forward Keion Brooks Jr., who averaged 4.5 points and 3.2 rebounds per game in 31 appearances, including six starts.

Calipari and his staff have prepared for the losses – which includes five underclassmen declaring for the NBA Draft – with the nation’s consensus No. 1 recruiting class and three key transfers.

Sarr, a high-impact forward at Wake Forest who averaged 13.7 points, 9.0 rebounds and 1.2 blocks last season, has applied for a waiver for immediate eligibility after a recent coaching change at his former school. Mintz, after graduating in May from Creighton, will be eligible this season and is expected to provide valuable depth and experience at the guard position. Toppin, as an incoming sophomore, will have three years of eligibility starting in the 2021-22 season. Toppin will be permitted to practice and train with the team this season, but the 6-foot-8 forward will not be able to play in games under current NCAA transfer rules.