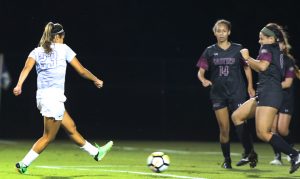 Wildcats win home opener
LEXINGTON, Ky. – A return the Bell Soccer Complex’ friendly confines was just what the doctor ordered for the Kentucky women’s soccer team as the Wildcats won their 2017 home opener 3-1 against Eastern Kentucky on Thursday. Senior Tanya Samarzich produced her first brace of the season, scoring the first two goals of her 2017 campaign.

The match happened in front of an opening-night record crowd of over 1,000 people at the Bell Soccer Complex.

With Wednesday’s win, Kentucky’s improved to 1-2-0 on the season. Head coach Ian Carry picked up his first win in charge of the program. UK Director of Athletics Mitch Barnhart marked the occasion by presenting Carry with the match ball pitch side following the final whistle.

Senior midfielder Foster Ignoffo opened the scoring in the 13th minute finishing a breakaway in the box for her first finish of the season.

Tanya Samarzich doubled Kentucky’s lead just after the start of the second half putting a flourish on the end of some quality passing in traffic by Katy Keen and Eva Mitchell.

Samarzich scored a second 17 minutes later redirecting a Miranda Jimenez cross back from the end line.

Jordan Foster pulled one back for the visitors eight minutes before the final whistle as the EKU Colonels dropped to 0-2-1 this season.

The Wildcats will conclude the second week of the season by facing Wyoming on Sunday afternoon.

The Sunday fixture will kick off at 1 p.m. ET, and shown live on the SEC Network+, ESPN3 and the WatchESPN app with Dave Baker (pxp) and former Kentucky All-American, Stuart Pope (color) on the call.

Live stats will be available on UKathletics.com and live in-match updates can be found by following @UKWomensSoccer on Twitter and Instagram.

Sunday is “Dollar Dog Sunday” where fans can bring their dogs to The Bell for $1 tickets and they are welcome to stay for the duration of the match.

Wyoming lost its only match of the 2017 opening weekend to Big XI powerhouse, Baylor, 2-1. The Cowgirls pushed the Bears to overtime, but fell victim to a 100th-minute goal by BU to send them past Wyoming. WU was outshot 27-5 in the match and goalkeeper Georgia Rowntree made seven saves in the match. Brittney Stark, the leading point-getter and goal scorer for Wyoming, returns this sea­son on the heels of a 13-point season in 2016 – (6g, 1a).