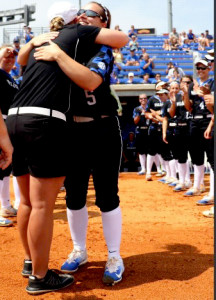 All three seniors contribute in 7-2 win over Aggies
LEXINGTON, Ky. – The No. 18 Kentucky softball team celebrated its annual Senior Day with a bang on Saturday afternoon, knocking off the No. 4 Texas A&M Aggies 7-2 to even the series at a game each. All three seniors had major contributions to the game with pitcher Shannon Smith getting the start in the circle, Meagan Prince coming on in relief to get the win and Breanne Ray going 1-for-2 with three RBI and a walk.

The win for Kentucky is its third top-five win of the season and second in Southeastern Conference play this season piggybacking off its win over No. 1 Florida earlier in April. Meagan Prince got her 17th win in the circle Saturday, throwing the final five innings, allowing no runs on one hit and striking out two batters, including Kaitlyn Alderink to end the game in the seventh.

Kentucky improves to 33-14 overall and is back to .500 in the SEC with a 10-10 record in league play. The Aggies suffer just their sixth loss of the season and fall to 41-6 and 15-4 in SEC play this season. Starting pitcher Lexi Smith suffered her first loss on the season, and falls to 11-1 on the year.

Game three of the series will be on Sunday at 1 p.m. ET from John Cropp Stadium. The game will be shown live on the SEC Network+, ESPN3 and the WatchESPN app with Dave Baker (pxp) and Dorian Craft (color) on the call from Lexington.

Brooklin Hinz’s lead-off double in the three-run fifth inning was the key play in the game. In the prior four innings, Kentucky was held without a hit and Smith had faced just one over the minimum.

Breanne Ray was the key player in the game going 1-for-2 with three RBI. Ray had the go-ahead RBI single with two on and two out in the fifth inning, as well as an RBI on a walk with the bases loaded in the sixth.

Texas A&M’s only two runs of the game came in the third inning after the first two batters of the inning got aboard with a walk and a single. Prince then entered the game and gave up a two-out two-RBI single with the bases loaded. TAMU 2, UK 0

Kentucky would score seven unanswered runs in the fifth and sixth innings to close out the game. Brooklin Hinz led off the fifth with UK’s first hit – a double to right field. Abbey Cheek was walked and Bailey Vick hit an RBI single to center to score Hinz from second. After a popout, senior Breanne Ray roped a two-RBI single into right with two outs to score Cheek and Vick to put the Wildcats ahead, 3-2. UK 3, TAMU 2

In the bottom of the sixth, UK would play add-on to the tune of four additional runs. Jenny Schaper singled with one out and Hinz was walked to put two on with an out. Erin Rethlake reached on a fielder’s choice and that loaded the bases for Katie Reed. Reed hit an RBI single to left which scored a run and made it 4-2. Ray was then walked followed by Martens who was also walked to force in two more runs. UK 7, TAMU 2