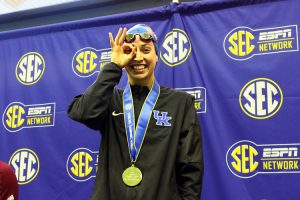 Sophomore Asia Seidt won the 100-yard backstroke with a school-record time of 50.86

COLLEGE STATION, Texas – With 25 yards to go in the 100-yard backstroke final, Kentucky sophomore Asia Seidt turned on the jets, going the fastest final split of the heat to edge out Missouri’s Hannah Stevens by five-hundredths of a second and win the Southeastern Conference championship in the event on Saturday night.

“It’s a pretty awesome feeling,” said Seidt. “I got third last year at SECs and I just wanted to come in and see what I could do. Lars (Jorgensen) and I talked at the beginning of the year and we really wanted to focus on being able to take it out in the 100 back and then bring it back even faster and that was something I was able to do tonight and I was really excited about it.”

After earning bronze last season, Seidt rewrote the record book with her victory, becoming the first ever Wildcat to win an SEC title in the 100 back with a school-record time of 50.86.

“It was a great day for the Cats,” said Kentucky head coach Lars Jorgensen. “All the events from the 200 butterfly, Lauren Edelman getting into her first final. Our breaststrokers were really fantastic with Madison Winstead getting a bronze medal. Bailey Bonnett’s been awesome all year, she did another fantastic job. Hopefully they’re going to be really good in the 200 breast tomorrow, and then Asia’s 100 back was phenomenal. What a close race that was. Phenomenal finish on her part. She’s extremely gutsy and she’s a lot of fun to coach, so I like that about her.”

Sophomore Madison Winstead made her way to the podium on Saturday night, taking home the bronze medal for Kentucky in the 100 breaststroke with a school-record time of 59.38. Winstead finished just ahead of her teammate, freshman Bailey Bonnett, who finished fourth with a time of 59.48.

For the men’s team, Kentucky’s divers highlighted the evening as three Wildcats made it back for the championship final, including freshman Chase Lane who made his finals debut. In a tough field, Lane led UK with a fifth-place finish overall with a score of 419.10. Junior Seb Masterton finished sixth with 391.85 points, and sophomore Kevin Frebel finished eighth at 307.05. In total, UK scored 76 points in the event.

“We were really excited to get three guys in the final. That was excellent,” said diving coach Ted Hautau. “Kevin Frebel did a phenomenal job getting into that final. Seb was outstanding all meet long, having a little bit of injury, he didn’t show it and he dived very well and was very mentally tough. And Chase was outstanding today. That was his highest score by a long shot, but he’s going to be doing a lot of high scoring on tower. Overall, I thought the men’s team was very consistent and they did their jobs, so we’re excited about that.”

Freshman Lauren Edelman made her first appearance in a championship final, finishing eighth overall in the event with a time of 1:56.84. Junior Haley McInerny was tenth overall in the event, going 1:56.82 in the B final, while Kayla Churman (1:58.63) and Kathryn Painter (1:58.70) also scored for Kentucky, competing in the C final.

For the men, junior Matthew Beach finished fifth in the C final of the 200 butterfly, touching the wall in 1:45.48.

Both Kentucky’s men’s and women’s 400 medley relay posted school records in the final races of the evening. Alexander, Winstead, Seidt and Geena Freriks combined to finish fourth in the relay with a UK record-time of 3:31.01, while the men’s squad of Swart, Amdor, Dingess and Jason Head finished eighth in the event in 3:10.78.

The final day of the SEC Championships will air live on SEC Network tomorrow evening at 7 p.m. ET, with events including the 200 backstroke, 100 freestyle, 200 breaststroke, women’s platform diving and the 400 freestyle relay.