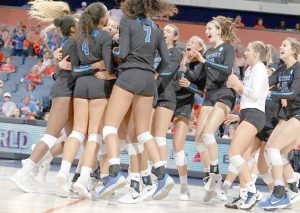 Wildcats knock off No. 1 ranked team for the first time in program history
GAINESVILLE, Fla. – History! For just the third time in Southeastern Conference history two top-10 ranked teams squared off. The No. 8 Kentucky volleyball team exited Gainesville, Florida, with more than just a 3-1 (25-20, 25-22, 23-25, 25-16) win over No. 1 Florida as a number of program records fell in the process.

For the first time in Kentucky volleyball history, the Wildcats topped the top-ranked team in the country. It is the third-consecutive win over the Gators on their home court; marking the first time in program history the Cats have achieved that feat. Florida was ranked in the top five in all three meetings. Kentucky has downed the Gators in three of its last four meetings which is the longest such streak since the Cats won six straight meetings from 1986 to 1990. The loss was the first of the season for Florida, which was the only remaining undefeated team in the country.

“I love the composure and toughness of the team after set three,” head coach Craig Skinner said. “I give a lot of credit to our seniors for leading the charge with their confidence. Darian Mack was big time Mack today. This team continues to impress us as a staff with how much they want something else, something beyond what they’ve done before.”

With the win, Kentucky improves to 16-2 overall on the season and 7-0 in league play. UK is the last remaining undefeated team in league competition. Florida falls to 13-1 overall and 5-1 against league foes.

A season ago, Kentucky walked into Gainesville and dominated defensively. This season the offense was too much for Florida to handle.

Freshman Madison Lilley directed the offense to the tune of an average of 16 kills per set on a .309 hitting percentage. She dished out 52 assists while adding four kills and 10 digs. It is the eighth double-double of the year for UK’s dynamic freshman stalwart.

Sophomore Leah Edmond led the team with a match-high 18 kills, while senior Darian Mack had a season-high 13 kills on a .379 hitting percentage. Senior Kaz Brown logged 11 kills on a .474 attacking clip to go along with a team-high four blocks. Freshman Avery Skinner had 10 kills, including the match-clinching point. Senior Emily Franklin chipped in with eight kills on a .571 clip.

“We went in and played our game,” Edmond said. “We know there are going to be runs but it’s about how we respond. We just forgot the previous play and moved on to the next one. I never go into a game thinking we’re going to lose.”

Mack, a senior, is taking it all in.

“You don’t get this opportunity often,” Mack said. “We pounced on it and had fun with it. It starts with practice. We were all working together.”

Defensively, senior libero Ashley Dusek was simply the difference maker. She posted a match-high 16 digs, but the number of plays that do not show up on the scoresheet were invaluable to UK’s success. Freshman Gabby Curry added seven digs, while junior McKenzie Watson contributed a pair.

Florida scored the first point of the set, but UK answered with a kill from Mack. Play seesawed until Florida was up 5-4, when UK rattled off five straight points, including three straight kills from Skinner that forced UF to call timeout. A Mack termination and Lilley ace put the Cats up 12-7, but Florida responded with three kills and made Kentucky burn a timeout at 12-10. Florida tied the set at 12-12, but UK put up three points to go up 115-12. Florida rattled two off, but another three point swing put UK up 18-14. Play seesawed until Florida got the lead down to 23-20. A Mack kill and ball handling error gave Kentucky the first set 25-20. The Wildcats hit .290 in the first set while Mack led the way with six kills.

Florida started the set on a three-point run. Kentucky got on the board after a service error. Play then went back-and-forth until UK was able to cut the lead down to 6-5. The Cats tied the set at 7-7 after two attacking errors. UK gained a lead at 9-8 after a Big Blue block from Mack and Franklin. UK gained the lead again at 12-11 after an Edmond kill. Edmond and Brown teamed up on a stuff and forced Florida to call timeout. Florida got the lead to 14-13 after the timeout, but UK went on a five-point swing, capped by an Edmond ace to take a 19-13 advantage. Florida went on a five-point run, but UK would respond. Mack gave the Cats a 22-19 lead and UK would never surrender more that advantage. Edmond got the final point for a 25-22 win.

Kentucky grabbed the first two points of the set after kills from Franklin and Edmond. Florida scored, but UK rattled off three more points after kills from Edmond and Brown to force an early break for Florida. The Gators earned two out of the break, but Kentucky responded with a Mack kill to end the small run. UK went up 12-5 after kills from Brown, Franklin and Skinner. Florida cut the UK advantage to 13-10 and forced UK to use its first timeout. Kentucky held a one point advantage until Florida tied the set at 17-17. Play seesawed until Mack and Edmond went back-to-back to go up 23-21. Florida had four straight to win the match, 25-23.

Kentucky won the first two points after kills from Brown and Edmond. Florida tied the set at 3-3. Brown got the lead at 4-3 with a kill and play seesawed until Florida was up 6-5. UK rattled off three-straight with kills from Franklin and Skinner to go up 8-6. After UF scored, Uk rattled off five more, capped by a Mack kill, to go up 13-67. Play went back-and forth until 14-9, where UK scored four more, thanks to kills from Lilley and Edmond. UK took its largest lead of the match at 21-11 after a solo stuff from Brown. Back-to-back kills from Brown and Skinner lifted the Cats to a 23-12 edge. Edmond’s 18th kill of the match gave UK match point and then Skinner ended things with her 10th hammer of the day.