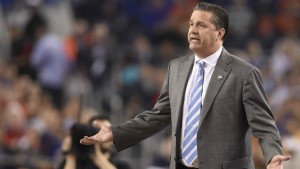 UK will play Florida, Missouri, Tennessee, Texas A&M, and Vanderbilt home and away

As announced prior to the 2015-16 season, Kentucky’s permanent home-and-away opponents include Florida, Tennessee and Vanderbilt. This upcoming season, the Wildcats will add Texas A&M to their home-and-away slate for the second consecutive season as well as Missouri, which is highlighted by the addition of head coach Cuonzo Martin and one of the best freshman prospects in the country.

Kentucky’s home schedule will include the five aforementioned teams, as well as Alabama, Georgia, Ole Miss and Mississippi State. UK’s lone matchups for the conference season on the road will come against Arkansas, Auburn, LSU and South Carolina.

Times, dates and television information will be announced at a later date.

In early-season projections, Kentucky, Florida and Missouri are top-25 ranked teams. Twenty-four of ESPN’s top-100 recruits in the 2017 class have signed to play in the SEC, including seven with the Cats. The league is coming off a season in which its teams combined to go 11-5 in the NCAA Tournament and had three teams advance to the Elite Eight.

Kentucky has claimed at least a share of the last three SEC regular-season titles and five overall under the direction of ninth-year head coach John Calipari. The Cats have also won the SEC Tournament five times in the last eight years during Calipari’s helm, including each of the past three years.

With the announcement of the SEC home-and-away designations, the 2017-18 men’s basketball schedule has begun to fill in. Previously announced games in nonconference action include Kansas (Nov. 14), Harvard (Dec. 2), Monmouth (Dec. 9), Virginia Tech (Dec. 16), UCLA (Dec. 23) and West Virginia (Jan. 27). Additional nonconference opponents, as well as a detailed SEC schedule will come at a later date.