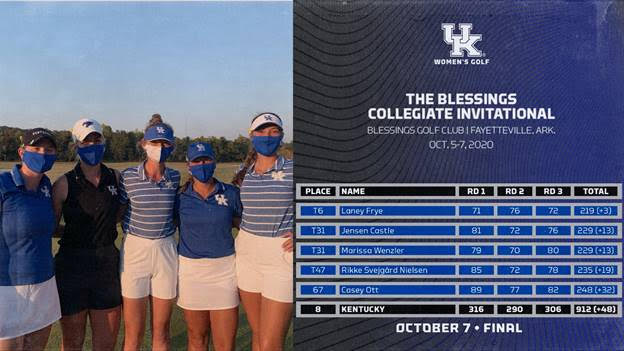 An eighth-place finish wasn’t quite the bar the Kentucky women’s golf team had set for itself in the opening tournament of the 2020-21 campaign, but the Wildcats will walk away from the Blessings Collegiate Invitational with continued high hopes for the season after an up-and-down week at the Blessings Golf Club.

UK struggled in the first round, bounced back Tuesday with one of the biggest in-tournament turnarounds in program history, but then couldn’t sustain the momentum in Wednesday’s conclusion of the 54-hole, Southeastern Conference-only mixed men’s and women’s tournament in Fayetteville, Arkansas.

Kentucky concluded the three-day competition with an 18-over-par 306. The Wildcats finished at 48-over par overall.

The highlight of the week was the poised play of freshman Laney Frye. Playing in her first college tournament, she tied for sixth place at 3-over par, the top freshman finisher in the field.

“We are very thankful to get back on the road and compete,” UK head coach Golda Borst said. “We had some higher hopes, some higher expectations for this first event, but given everything we’ve gone through – the format being different and all the challenges that we faced and how we attempted to prepare for this playing in fivesomes – it just feels really good to be back.”

It was a unique format in Fayetteville.

After careful consideration from health officials, the SEC deemed it safe for league membership to participate in three team events in the fall. Competition could take place no earlier than Oct. 1 and teams are limited to events involving only SEC members or nonconference teams from the tournament host’s geographic region.

This week was SEC only, and after seven months off from collegiate competition, it was an extremely difficult test at the Blessings Golf Club (par 72, 6,171 yards). The Robert Trent Jones layout and site of the 2019 NCAA Championships is considered one of the toughest tracks in the country.

To adhere to safety guidelines set forth by the Centers for Disease Control and Prevention and limit contact with other teams, players played exclusively with their own teammates this week in fivesomes. With both the men and women packing the course and danger at every corner at the Blessings, movement of play was slow at times.

But the Wildcats battled through the frequent waiting and showed signs of building on last season’s breakthrough year that included two championships and a runner-up finish, a record team scoring average, and 10 top-10 and 20 top-20 individual showings before the campaign was abruptly ended by the COVID-19 pandemic

“We didn’t score as well as we wanted to, but when you’ve had a break for seven months, it’s hard to get back on the road and score,” Borst said. “That’s no excuse, but we can do better, and with the depth we have at home, I know we’re going to get more competitive and it’s just going to get better as we go on.”

For the five Wildcats in action this week, there will be plenty to build on, none more so than Frye.

The Lexington Christian Academy was hardly fazed by adversity this week. The 2018 Kentucky High School Athletic Association state champion carded at least three birdies in all three rounds, highlighted by a team-high-tying five in the final round. Three of those took place on the back nine, where UK began its round on Wednesday.

“Extremely proud (of Frye),” Borst said. “The poise, the confidence and the competitiveness of Laney – we knew that she had this in her. For her to come out and do it in the first event knowing that she has so much left in her – she has so many more shots to learn to be able to go low – she’s got a bright future and we’re really excited to have her on our team.”

Sophomores Jensen Castle and Marissa Wenzler, the two centerpieces of Kentucky’s historic 2019-20 season, flashed signs of their freshman successes but tied for 31st at 13-over par overall, below their expectations.

Castle, a 2020 All-SEC First Team selection and the program’s single-season stroke average record holder, overall bounced back nicely from an opening-round 80. She dug out of that hole with an even-par 72 in the second round and a 76 in the finale.

Wenzler is coming off a sensational summer that saw her win two championships and finish second in two others. She looked like that golfer with a 2-under-par 70 on Tuesday but carded a 79 before that and an 80 to finish the tournament.

Senior Rikke Svejgård Nielsen really battled out of adversity this week. An 85 to open the tournament put her behind the 8-ball. She made nearly 160 feet worth of putts on her second nine Tuesday for a 72, and though she shot a 78 in the final round, she played the final three holes at 3-under par. Svejgård Nielsen tied for 47th overall at 19-overall par.

Junior Casey Ott placed 67th for the week at 32-over par. She posted scores of 89, 77 and 82. After leading UK with three top-10 showings a season ago, she’ll try to put the BCI performance behind her.

Host Arkansas, at even par, used its home course knowledge to its advantage with a commanding 18-shot victory over LSU. The Razorbacks’ Brooke Matthews was five shots clear of the field and won individual medalist honors with a score of 10-under par.

The Kentucky men also placed eighth but featured arguably the best story of the week. Sophomore Alex Goff, who was carrying the bag of the late Cullan Brown, held on for an emotional win, crediting the victory to his deceased friend.

The women will return to action two weeks from now (Oct. 19-21) at the Ally in Starkville, Mississippi. The fall season will conclude Nov. 6-8 at the Liz Murphey Fall Collegiate Classic in Athens, Georgia.