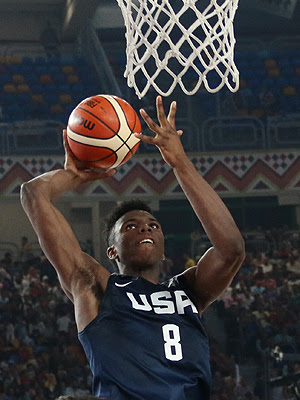 Hamidou Diallo led the way with 17 points as the USA steamrolled Iran 108-48 in both teams’ opening game of the FIBA U19 World Cup in Cairo, Egypt.

“Even in these kind of events, NCAA events, FIBA events, the first game is the hardest to get started and get your feet underneath you,” said USA U19 head coach John Calipari (Kentucky). “Even though we had a couple of exhibition games and both opponents were pretty good, we came out like ‘what in the world?’ We almost went a quarter, well we went six minutes, having four points and how in the world we scored that many… But eventually we’re going to wear people down.

“Now the question is when we get one of the good teams later in the week, will we start better, will we play better, will we have some fire? But I thought they got it, and they played and they’re trying. It’s just hard, we’ve been together eight days, come on. It makes it tough, but hopefully we’ll continue to get better.”

The USA’s superior athleticism and depth was on display, as all 12 players scored between two and 17 points. Hamidou Diallo (Kentucky/Queens, N.Y. – add the periods) led the red, white and blue offensive charge with 17 points on 7-of-9 shooting from the floor, while adding four rebounds, two assists, one blocked shot and one steal in 15:53 of playing time. Guard Carsen Edwards (Purdue/Atascocita, Texas) drained 3-of-4 3-point shots and contributed 15 points; Cameron Reddish (Westtown School/Norristown, Pa.) scored 14 points and made all three of his 3-point tries; Brandon McCoy (Cathedral Catholic H.S/San Diego, Calif.) recorded a double-double, posting 14 points, 10 rebounds and added three blocked shots; and PJ Washington (Findlay Prep/Las Vegas, Nev.) finished the opener with 13 points.

“Every game you’re going to face some adversity, you just have to overcome it,” said Diallo. “In the first half our starters didn’t play as well but the bench picked it up and gave us the spark we needed. That’s the type of team that we are, we can all do it.”

Washington started the USA scoring and 50 seconds into game Reddish slammed home two off of a steal and the USA was up 4-0.

But the USA didn’t score again for 5:35 and the only good news was the U.S. defense held Iran scoreless until the 3:53 mark of the opening quarter.

Holding onto a 4-2 lead, Edwards connected from behind the 3-point arc and the USA was finally off and running.

Pushing ahead 12-2 following a free throw from Edwards, Iran stopped the 8-0 run with its first basket of the quarter at 2:17, and from there the USA capped the opening stanza by outscoring Iran 6-2 to take a comfortable 18-6 lead.

Iran offensive woes were obvious in the first quarter statistics as it made just 2-of-13 shots, while turning the ball over eight times. The USA had seven turnovers of its own in the opening 10 minutes, while shooting 40 percent (6-15 FGs) from the field.

Reddish made the first of his three 3s to start the second quarter and with 4:43 to play in quarter number two, following a 7-0 Iran scoring run, the Americans led 29-17.

Outscoring Iran 30-13 in the third, which included a little run of 21 straight USA points midway through quarter, the USA owned a 76-37 lead heading in the fourth period.

Dominating the scoring again in the fourth quarter, this time by a 32-11 margin, the U.S. steamed in for the 108-48 victory.

“We have a lot of players off the bench as well that can really play, as well as some really good players on the floor that start. I think that’s a strength. We feel we are a deep team and we’re just going to keep working,” said Edwards.

The USA owned a 52-29 advantage on the glass, and after turning the ball over seven times in the first 10 minutes, had just eight more over the final 30 minutes. The USA bench contributed 53 of the USA’s 108 points.

Looking for its third-consecutive gold medal at the July 1-9 FIBA U19 World Cup for Men in Cairo, Egypt, the United States will cap preliminary round action versus Italy on July 4 (10:30 a.m. EDT).