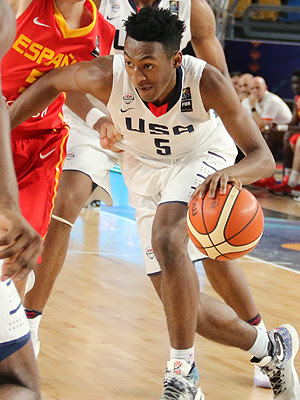 Immanuel Quickley made 3-of-3 from 3-point and finished with 11 points in the USA’s 96-72 win over Spain in the 2017 FIBA U19 World Cup bronze medal game Sunday night in Cairo, Egypt.

“To be able to bounce back and play the way they did from start to finish shows me a lot about them,” said USA head coach John Calipari (Kentucky) on his team’s effort in the bronze medal game. “We were all still really disappointed. We came here to not only play for the gold, but win the gold, and to play like we did and have Canada come out and play so well, it was just disappointing that we couldn’t get it done. To come back today and play and win the bronze, it’s a good way to end.”

“I think we came out and we played great. Everybody is a little tired from the trip, but I think we finished it out strong. I think we just battled today,” said Pritchard. “Everybody was just playing hard, really. Nobody was taking the day off or wanted to go home or anything. It’s good that we finished strong. This builds character.”

The USA again owned the glass and behind nine boards from Brandon McCoy (Cathedral Catholic H.S/San Diego, Calif.), eight rebounds from Wiley and seven from Josh Okogie (Georgia Tech/Snellville, Ga.), the U.S. posted a 51-35 advantage on the boards.

Opening the game’s scoring with a Reddish 3, the USA was off to the races and never trailed in the contest. Quickley made a pair of 3s to push the U.S. advantage to 15-4 with 4:11 left in the quarter.

“I think it was really important (to start strong),” said Quickley.  “It was the bronze medal game, so it is kind of tough, but I think we came out and played well from the jump.”

A Kevin Huerter (Maryland/Clifton Park, N.Y.) basket made the score 17-4, and an Edward’s, 3, followed by a basket from Huerter and 3 from Louis King (Hudson Catholic H.S./Columbus, N.J.) ballooned the USA lead to 25-8 at the end of the first 10 minutes.

The USA carried a 49-30 lead into the locker room at halftime, but Spain made one last run at the Americans. Spain opened the third quarter by outscoring the U.S. 10-5 to close the U.S. advantage to 54-40 with 5:28 to play in the third.

The USA, getting points from four different players, countered with an 8-1 run to regain control, 61-41, and at the end of the third the U.S. was fully in command, 68-45.

“We just wanted to bounce back (from Saturday’s semifinals loss). We had the opportunity to play and go home with something, so I felt like we came out and left with something,” said Edwards.

The USA men in 13 FIBA U19 World Cup appearances has now won six golds, three silver and one bronze medal, while compiling an overall record of 91-14.

Assisting Calipari with the USA U19 World Cup Team were Tad Boyle from the University of Colorado and 1988 U.S. Olympian Danny Manning from Wake Forest University.