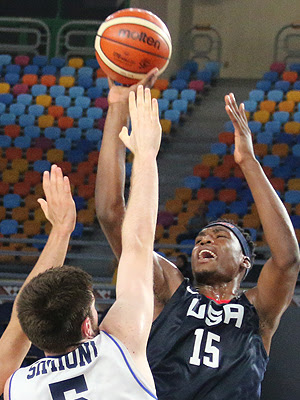 “I thought Italy played great, they hit a lot of shots at the beginning and that forces us to bounce back and play some defense more so than the first two games,” said Washington, who after three games leads the USA scoring averaging at 14.7 point per game while adding 5.0 rebounds and 2.3 assists a game. “I was just trying to get to the rack, just trying to be aggressive, just playing my game and I felt like it was working for me tonight.”

The win improved the Americans to 3-0 and earned them the Group D number one seed for the Round of 16.  The USA will next face Mali (0-3), the fourth-place finisher in Group C, on Wednesday with the game time TBA.

“PJ’s (Washington) a beast and I don’t know how you guard him,” admitted USA and University of Kentucky coach John Calipari.  “If he gets an angle by you, he’s tough to stop. And he made his free throws today. He’s playing the way we need him to play.”

Washington and Reddish sandwiched 3s around a Hamidou Diallo (Kentucky/Queens, NY) offensive put back, and the USA sprinted ahead 8-0.  Upping the lead to 10-0, Italy quickly cut the gap to five, 10-5, and Quickley splashed another 3 to push the U.S. ahead 13-5 with 6:30 remaining in the first quarter.

Behind two 3-pointers of its own, Italy went on a 10-0 tear to pull ahead 15-13 with 3:40 to play.  Italy’s lead marked the first time the USA trailed in any of its preliminary round games.

Kevin Huerter (Maryland/Clifton Park, N.Y.) tipped in an offensive rebound to tie the score 15-15, but Italy made its fourth 3 of the quarter to regain the advantage 18-15 with 2:45 remaining in the opening stanza.

While refocusing it defense, Huerter continued to provide an offensive spark and drained a 3, then on the next possession, made one of two free throws as the USA closed the quarter with a 12-3 scoring run to open a 27-21 lead after one quarter of action.

Holding onto a 31-29 lead, it was USA guard Payton Pritchard’s (Oregon/West Linn, Ore.) turn to hit a 3 which made the score 34-29. Italy countered with a hoop at the other end, but the USA, behind five points from Brandon McCoy (Cathedral Catholic H.S/San Diego, Calif.), posted a 10-0 scoring run to grab control 44-31 with 4:40 remaining before halftime.

Finishing off the quarter with a Carsen Edwards (Purdue/Atascocita, Texas) 3, the USA’s sixth 3 of the half, the USA retired to its locker room leading 53-39.

Led by Reddish’s eight points, the USA outscored Italy 12-3 over the first 4:48 of the third quarter, and went on to out produce Italy 20-6 in the third quarter to put an end to any Italian victory thoughts.

Leading comfortably 73-45 heading into the final period, the USA squad sailed in from there for the 98-65 win.

“I like it,” said Calipari about his team getting its first real test from an opponent. “I wanted to see when you have a 10-0 lead, okay it’s time to get it to 18-2, 22-4. Next group goes in and gets it to 40.  We weren’t ready for that.  So, all of a sudden, we let another team come back and they’re in the game with a chance to beat you. Now it’s a long way away, but I was happy it happened.”

Setting a USA U19 single-game record for rebounds two night earlier with 63 versus Angola, the Americans raised the mark to 67 and outrebounded Italy by 27 boards.

The USA bench contributed 41 points in the win, and 23 of the USA’s 31 field goals were assisted on. The USA also owned a commanding advantage at the charity stripe, making 27-of-42 tries, while Italy was just 10-of-14.

With preliminary round play completed, all 16 teams will be seeded according to group play results and will advance to the July 5 round of 16. Winners will advance to the July 7 medal quarterfinals, while the remaining teams will continue playing out for classification. The medal semifinals will be held July 8, and the gold and bronze medal games are slated for July 9.