Volleyball – No. 18 Kentucky Rallies for 3-2 Win at Auburn 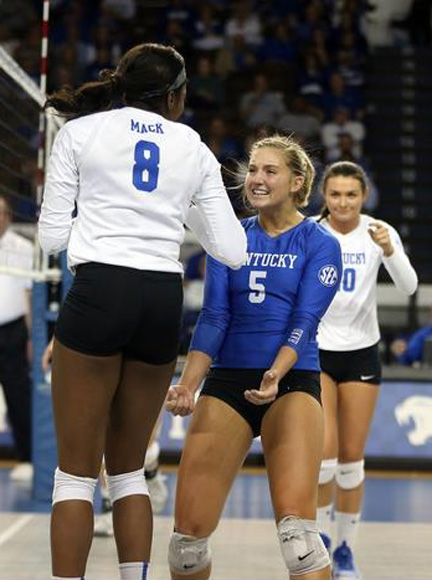 UK improves to 18-5 overall and 11-1 in the Southeastern Conference. Auburn drops to 13-12 overall and 7-5 in league play. The Wildcats will return home for a match with Missouri at Noon ET in Memorial Coliseum on Sunday.

“This game showed our never-die attitude and I think this team is unfazed by situations,” head coach Craig Skinner said. “We will continue to believe in each other and fight for each other. Tonight was a great match to show that.”

Auburn pushed UK to the limit, taking the first two sets from the Wildcats and forced the third and fourth set past 25 points. The Wildcats were down 27-26 in the fourth set facing elimination, but an incredible dig from junior Ashley Dusek helped UK survive two free balls to earn a point on an attack error.

Dusek tied her season-best with 27 digs during the five-set win, and hit the 1,000 dig mark for her career. Dusek sits fifth in school history during the 25-point rally scoring era with 1,025 digs. Five Wildcats – freshman Leah Edmond, senior Anni Thomasson, sophomore Olivia Dailey, sophomore McKenzie Watson and Dusek – all had double-digit digs during the contest

Edmond hit the double-digit mark for kills for the 19th time this season and led the squad with 20 kills. The Lexington, Kentucky native picked up her seventh double-double of the season, a team-high with 12 digs and the 20 kills.

Dailey earned another double-double as she registered 45 assists and 10 scoops in the win. The double-double is her third of the season.

Junior Kaz Brown was fantastic at the net as she picked up nine block assists and one block solo, which tied her season-best at 10 blocks. The Waterloo, Iowa native also added nine kills and two digs in the contest. Classmate Darian Mack chipped in with nine kills and six blocks. Junior Emily Franklin had seven kills and a trio of blocks, while senior Sharay Barnes contributed five kills and two blocks.

Serving errors played a major role in the contest. The two teams combined for 42 errors during the contest, and Auburn committed 25 of those.

Auburn picked up the five of the first six points in the match and put the pressure on UK early. Auburn went up 9-3 and forced a UK timeout. After the timeout, Kentucky regrouped and got a point back on block from Brown and Mack. After the Tigers answered, UK rattled off three-straight points to cut the lead to 10-7. The set went back-and-forth until Auburn earned a 16-11 lead. UK went on another 3-0 run which was capped by a Franklin kill to make the set 16-14. Edmond was able to get the set tied at 18-18, and no team could get above a one-point lead until Auburn took set point, 25-23. Dusek had six digs in the set and reached the 1,000 milestone in her career.

Kentucky started with the set’s first point and the squads went back-and-forth early on. UK gained some space on Auburn at 7-3 from a block by Mack and Brown. When UK had an 8-5 advantage, Auburn rattled off four-straight points to gain a 9-8 lead. Kentucky would retake the lead at 11-10 from an Edmond kill and hold it until Auburn took a 17-16 lead. The match would go seesaw until Auburn pulled ahead, 24-21. Brown earned a kill to cut the lead to two, but Auburn would win the set 25-22.

Franklin started the set with a kill. Much like the first two sets, neither team could find separation. Up 7-5, UK rattled off three-straight points, capped by a Dailey service ace, to take a 9-5 lead. The Tigers would respond with a 5-0 run of its own which forced a UK timeout. Out of the timeout, Kentucky picked up a kill from Edmond and an attack error to retake the lead at 13-12. The two teams would trade points until the score was 18-18. The Tigers scored two-straight and UK would answer with three straight. Auburn was able tie the set at 24-24 before kills from Edmond and Thomasson gave UK the third set.

Every set was close, and the fourth set was no different. No team took more than a two-point lead in the stanza. Auburn took the lead at 25-24, and Kentucky responded with a Mack kill. UK took the lead with an attack error. The Tigers responded with two points of their own to retake the lead, 27-26. After Dusek saved the match with a dig, Kentucky won the set 30-28 with an Edmond kill.

UK started the final set on a 3-0 run capped by an Auburn attacking error. The set went back-and-forth until Kentucky took the final four points of the set. Edmond, Brown and Mack all picked up kills to make the set 14-12 and Edmond won the match on a service ace.

1,025 – Career digs from junior Ashley Dusek who matched a season high with 27 scoops

3 – Double-doubles on the year for sophomore setter Olivia Dailey

2 – Sets the Wildcats overcame to win the match