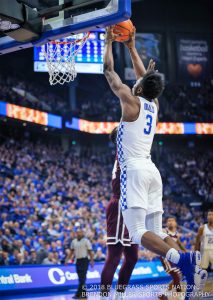 Lexington, KY, The University of Kentucky continued SEC play with another Home game hosting the Mississippi State University Bulldogs.  Kentucky is currently on a two- game losing streak and in a dire need of a victory to not only give the team some much needed confidence, but also improve in SEC standings.  Kentucky Currently has a 14-5 record on the season and is tied for fourth place in SEC standings tied with the Tennessee Volunteers. Kentucky is a team that lost to the Florida Gators 66-64 on a very controversial non- call, and in return fell from the top 25 rankings for the first time since the 2013-2014 season.  A loss tonight could put Kentucky in fifth place in the Conference and third in SEC East standings.  Calipari has never lost three consecutive games as the Head coach of the University of Kentucky, and that is a streak the Wildcat faithful has no desire of braking.  Mississippi State enters tonight’s game with an identical record of 14-5, but are in 12th place in conference standings with a 2-4 record in the South- Eastern conference.

Kentucky gets the tip and scores on the opening possession as Alexander finds Diallo for an over the top lob. Mississippi State counters on their first possession and the game Is tied at two with 19:30 remaining in the first half.  The teams trade baskets on the next couple of possessions and Mississippi State has a slim one- point lead with 17:26 remaining in the half.  Kentucky 6- Mississippi State 7.  Earlier in the week Coach John Calipari announced a tweak to the offense, that should make the offense better.  The tweak involved the implementation of the dribble drive offense.  Coach Cal has used this offense in years past and was very successful running this offense.  This Kentucky team tried to run the dribble drive offense in tonight’s game, but the CATS struggled to score the ball, resulting in Calipari going back to his traditional offense.  Kevin Knox who has struggled in recent games hits an early three- point basket and UK cuts the deficit to three points with 13:40 remaining in the half.  Kentucky 10- Mississippi State 13.   The CATS continued to look for Kevin Knox and the star freshmen connects with two consecutive three- point baskets, Knox third 3 PT basket of the half.  Knox’s made three ties the game at 18 with 11:04 remaining in the half.  Mississippi State has to adjust and switched the defense from the 2-3 zone to a man to man defense.  Kentucky capitalizes and puts the ball in Shai Gilgeous – Alexanders hands.  Shai uses his speed and athleticism, routinely getting behind the Bulldog defense scoring the ball or finding teammates for open shots.  Kentucky starts to develop a lead and the team is gelling, playing with confidences Kentucky leads 34- 27 with 4:27 remaining in the half.  P.J. Washington has been a liability shooting free throws was very effective in tonight’s game.  Washington shoots 5-6 from the Charity Stripe, and 3-4 from the field giving the star freshmen 11 points and three rebounds at the half.  At the half, UK leads 38-36 over Mississippi State Bulldogs.  Kevin Knox was spectacular with 13 points shooting 3-3 from the 3PT line, 2-2 from the FT line, and 4-5 from the field.

Mississippi State opens the second half with two consecutive baskets, taking a two- point lead 19:24 remained in the second half.  Kentucky comes out flat, and Coach Calipari calls a quick timeout to settle down his team.  Wenyen Gabriel who was a non- factor in the first half due to picking up two early personal fouls, ties the game at 40 with a strong rebound and scores on the put back.  Gabriel makes a three- point basket after the bulldogs score 2 pts on the lay up during the previous possession.  The CATS take a one- point lead 43-42, 17:47 remains in the half.  Mississippi State star point guard Quenten Weatherspoon starts having success scoring the ball and the Bulldogs use the talented guard’s skills to take a one- point lead at the first media timeout.  Kentucky 52- Mississippi State 49, 15:07 remained in the half. Weatherspoon has a game high seventeen points, and is providing a challenge with the young Wildcat Team.  Weatherspoon continues his stellar play dunking the play with a one dunk in transition while the bulldogs add to the lead, increasing to lead to three points 52- 49 with 12:45 remaining in the game.  P.J. Washington ties the game at 52 and is fouled during the play.  Washington makes the free throw and UK takes a one- point lead 53-52.  Kevin Knox played a great first half, struggled in the second half until he connects with another 3pt basket.  Knox’s fourth of the game, giving UK some much needed confidence and a four-point lead 58-54, 8:19 remained in the game.  Diallo and Vanderbilt score two consecutive baskets as the CATS take advantage of turnovers, allowing the CATS to get in transition.  Kentucky is playing their best basketball of the game, and the crowd comes alive cheering with excitement.  Kentucky 62- Mississippi State 54, 7:01 remained in the half.  The Bulldogs attempt to cut the lead scoring on several possessions, but the Wildcats answered with scoring plays of their own, maintaining a seven to nine- point lead.  Kentucky continues to build on the lead and develops a thirteen- point lead in the closing moments of the game.  UK defeats the MSU 78- 65, improving on the season with a 15-5 record and 5-3 in SEC play.

Stats- Stats have been provided by UK atletics

Kentucky improves on the season with a 15-5 record and 5-3 in SEC standings.  The win wasn’t pretty but the CATS defeated a solid Mississippi State team.  Kentucky Moves into third place in league standings only trailing the Florida Gators, and Auburn Tigers.  Kentucky will next play in Morgantown, WV against the West Virginia Mountaineers.  The game is part of ESPN College Game Day as the feature game of the Week and part of the SEC/BIG 12 Challenge.  Mississippi State drops on the season with a record of 14-6 and 2-5 in SEC Conference.  Mississippi State hosts the Missouri Tigers on Saturday, January, 27, 2018.