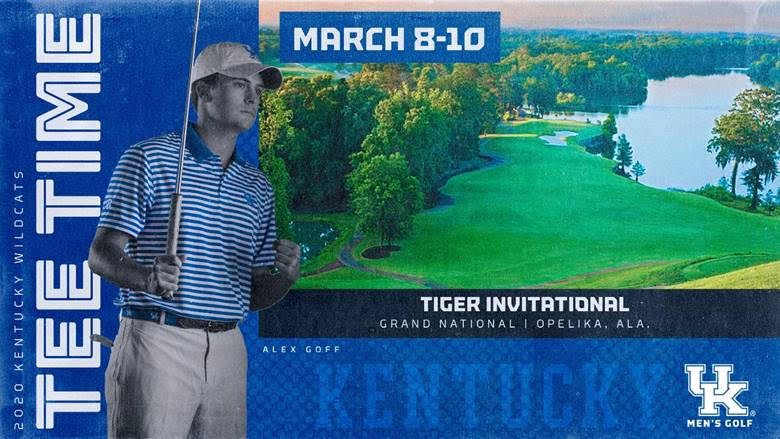 LEXINGTON, Ky. – After getting rained out of its opening event of the spring season, the Kentucky men’s golf team has added an appearance at the Tiger Invitational presented by Jason Dufner in Opelika, Alabama, March 8-10. The three-day, 54-hole event features 19 teams in the field at the Grand National on the Lake Course.

“Sometimes adversity can be a blessing in disguise,” UK head coach Brian Craig said. “We got rained out of two rounds in Puerto Rico, but get to play in the Tiger Invitational hosted by Auburn as a makeup. I really feel like this team is ready to have a great spring and this would be a good time to start.”

UK’s starters consist of senior Allen Hamilton, redshirt freshman Alex Goff, junior Garrett Wood, sophomore Zach Norris and junior Jacob Cook. The Wildcats will use the practice round to determine who will play as an individual.

Hamilton fired a 1-under par 71 during the lone round of the TPC Dorado Beach Collegiate and leads the Wildcats in scoring average at 72.79 for the season.

Kentucky appeared in four fall events with its best finish coming at the Bearcat Invitational in which the Cats placed third. The Wildcats had three individual top-10 finishes during the fall campaign and eight top-20 showings.

Auburn will host the 54-hole tournament with a round of 18 taking place each day at Grand National.

Built on 600-acre Lake Saugahatchee, 32 of the 54 holes drape along its filigreed shores. Both the Links course and the Lake course were in the top 10 of Golf Digest’s list of “America’s Top 50 Affordable Courses” and all three courses at the Grand National are listed among the nation’s 40 Super Value courses by Golf Digest’s “Places to Play.” With 12 holes hugging the shore of Lake Saugahatchee, the Lake course is one of the most scenic courses you can find. The quartet of par threes is as good as any in the nation.

Live stats will be available via golfstat.com.