Wildcats Come Up Short vs. Gamecocks 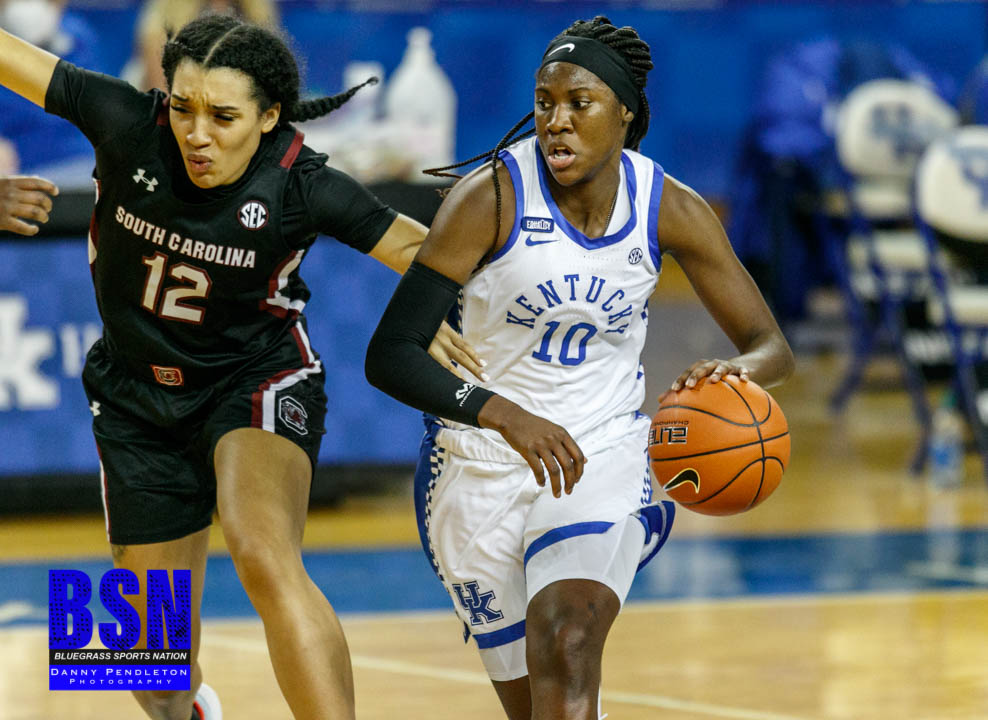 Kentucky (9-3, 2-2 SEC) got 12 points and seven rebounds from Dre’una Edwards and 12 points from Chasity Patterson.

For Howard, it was the second time that she has scored at least 30 points in a game this season and the fifth time in her UK career. Howard moved into 17th place on UK’s career scoring list on Sunday, passing Belitta Croley, Kristi Cushenberry and Taylor Murray. Howard now has 1,362 points in her three-year UK career.

After the teams combined to miss their first eight shots, five by Kentucky and three by South Carolina, the Gamecocks got on the board on a Victaria Saxton layup. Kentucky answered with a Howard driving layup, and a free throw, to take a 3-2 lead. After a South Carolina basket, Kentucky got a Patterson layup to take a 5-4 lead.

South Carolina would score four in a row, taking an 8-5 lead in the process. But Howard would score six straight for the Cats as UK took an 11-8 lead with 4:05 left in the first. Those were the first points in a 14-4 run that gave Kentucky a 19-12 advantage. UK would lead 19-15 after one period.

South Carolina scored the first three points of the second quarter to cut the UK lead to 19-18. But the Cats answered with a three from Blair Green and a jumper from Howard to lead 24-18. After South Carolina got within two, 24-22, the Cats went on a 7-2 run to take a 31-24 lead with 3:37 left in the period.

The Gamecocks then went on a 7-2 run of their own to cut the UK advantage to 33-31 with 2:09 left in the half. But the Cats closed the quarter on an 8-1 run, including the final six points of the half, to grab a 41-32 lead at the break. Howard led all scorers with 19 points at the break.

South Carolina started the second half with an 8-2 run to cut the UK lead to 43-40 with 7:20 left in the third. Kentucky then scored five of the next six, including a three-point play by Howard, to stretch the advantage to 48-41.

Kentucky would lead 56-48 late in the third before South Carolina scored the final nine points of the period to take a 57-56 into the final 10 minutes.

Howard scored the first basket of the fourth quarter to give UK a 58-57 lead but South Carolina would run off eight straight points to grab a 65-58 advantage with 7:21 to go, forcing a Kentucky timeout.

Kentucky got a basket from Howard out of the timeout, but South Carolina got four points in a row from Destanni Henderson to grab their biggest lead of the game, 69-60, with 4:29 to play.

The Cats would not go away, especially Patterson. The senior guard from Houston scored eight points in a row, including back-to-back three-pointers, to cut the deficit to 69-68 with 2:31 to play. The Cats would have a chance to take the lead on their next possession, but Howard missed an open three from the top of the key.

After South Carolina missed a pair of free throws with 25 seconds to play, the Cats had a chance to tie. Howard’s off-balance three missed, as did Edwards’ put back attempt and the Gamecocks got the rebound.

South Carolina’s Zia Cooke was fouled with 10.3 seconds left and made both free throws to give the Gamecocks a 75-70 advantage. That would be the final score.

Kentucky returns to action on Thursday, visiting Auburn for an SEC contest. The game is set to tip off at 8:30 p.m. ET and can be seen on the SEC Network.