Wildcats Use Grinding Ground Game to Slam Door on the Commodores 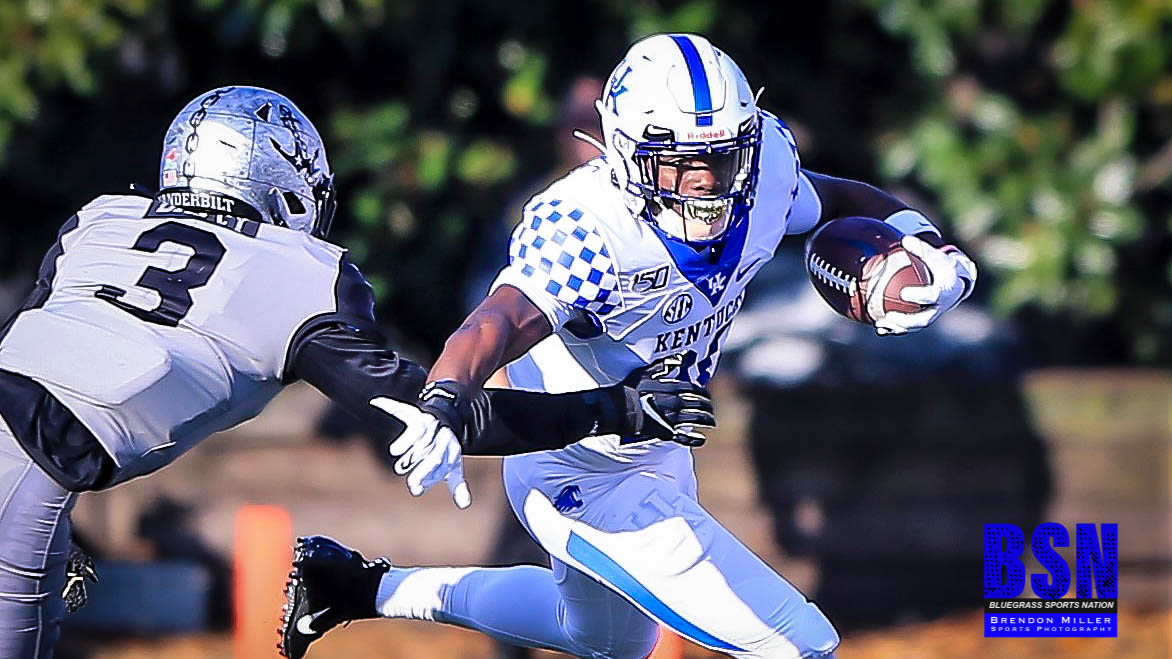 Kentucky moved within one game be becoming bowl eligible for the fourth straight season with a 38-14 win over Vanderbilt in its Southeastern Conference finale Saturday in Nashville.

Coming off a disappointing 17-13 loss to Tennessee last week, the Wildcats fell behind 14-3 after the Commodores scooped up an A.J. Rose fumble and returned it 67 yards for a touchdown at the 4:36 mark of the first quarter.

From that point on, it was all Kentucky, which recorded its fourth straight victory over the Commodores, including two in a row in Nashville. Kentucky closed out the league portion of the schedule with three wins in its last five conference games.

“We faced some adversity last week — tough game,” Kentucky coach Mark Stoops said. “Sometimes that can linger, but it did not this week as you can tell. We were very prepared, very motivated and played extremely hard once again. … We really responded well. We faced adversity early (and) our team didn’t flinch. We went right back out there and methodically took care of business. That’s the way we operate when we’re at our best. That was total team effort.”

The Wildcats (5-5, 3-5 SEC) scored on their final four possessions of the first half and led 24-4 at the break. Kentucky scored 25 unanswered following the lone turnover of the game to defeat Vanderbilt.

In his fifth straight start as Kentucky’s starting quarterback, Lynn Bowden directed an offense that collected 529 yards against the struggling Commodores and most of that yardage was attained in the ground. The Wildcats rushed for a season-high 401 yards and four runners that rushed for 65 yards or more in the contest.

Bowden rushed for 110 yards and one score, while throwing for 104 yards and another score in his three quarters in the field. Sawyer Smith and Walker Wood played while Bowden sat out the fourth quarter. In his debut, Wood rushed for 12 yards and completed one pass for seven yards.

Kavosiey Smoke and Chris Rodriguez combined for 224 yards and two touchdowns. Rodriguez rushed for a career-high 129 yards on 15 carries. Smoke added one reception for 28 yards for the Wildcats.

“You’ve seen flashes and you’ve seen them do some really good things,” Stoops said of Smoke and Rodriguez. “Today, I saw a couple of runs where they kind of took over and did some determined, tough runs. They showed some really athletic plays.”

In addition to rushing the ball for more than 100 yards, Bowden threw a 14-yard touchdown pass to Josh Ali in the second quarter. He added a 40-yard strike to Cleven Thomas, who was stopped shy of the goal-line at the 2-yard line. Bowden finished the drive with a 2-yard touchdown to open Kentucky’s scoring in the second half.

“You have to give (Lynn) the credit he deserves,” Stoops said. “We’re all sitting and watch this unfold this season. … its not easy doing what he is doing. It’s just some athlete back there (playing quarterback) just making plays. He is doing some amazing things. … he’s executing and then he has that toughness too. You out it all together and it’s pretty remarkable with some of the things he’s doing right now.”

Kentucky also was impressive defensively and limited Vanderbilt to 198 total yards. The Wildcats have held their last five opponents to 21 points or less.