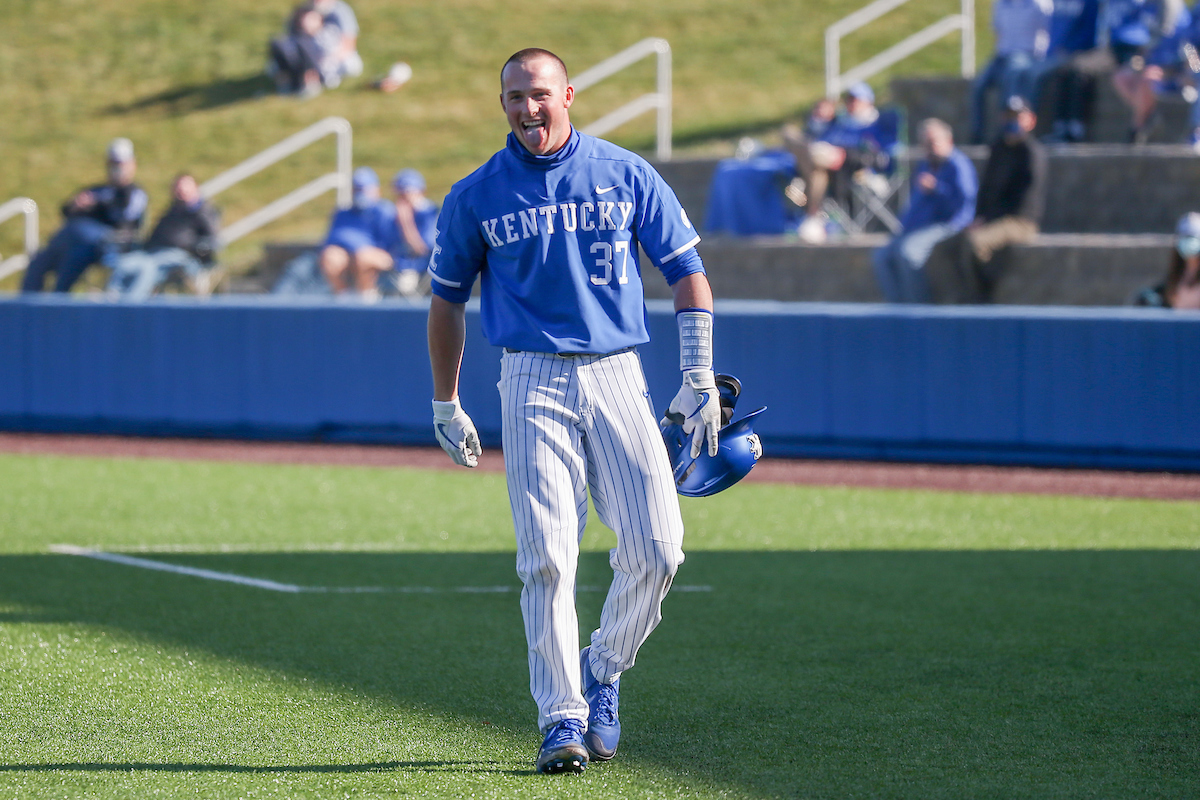 Cam Hill didn’t enter the game until the ninth inning, didn’t have a hit. a putout or even an official at-bat, yet pushed Kentucky to a dramatic 5-4 walk-off win over Missouri on Saturday afternoon at Kentucky Proud Park, securing a series win on opening weekend in the Southeastern Conference.

Hill, a redshirt junior outfielder, came in as a defensive replacement in the top of the ninth inning before leading off the bottom half by taking a pitch off the helmet. After convincing trainers and UK head coach Nick Mingione he was uninjured, he promptly scooted to second on a passed ball and stole third to sit 90 feet from victory. When Lukas Veinbergs’ pitch to Kirk Liebert popped out of catcher Chad McDaniel’s glove and caromed toward the Missouri dugout, Hill raced home, sliding across home plate with a headfirst slide to score the game-winner.

Hill, known as a gritty, do-anything-it-takes teammate, didn’t hesitate to take the hit by pitch and set up the Cats’ first walk-off win since John Rhodes’ home run beat Murray State on Mar. 4, 2020.

“I saw it come out of his hands and toward (my head) and I said I wasn’t going to move,” Hill said.

The victory moved UK to 13-3 overall and 2-0 in the SEC for just the third time in the past 15 seasons. They’ll look to secure a sweep on Sunday, which would be the first league sweep since taking three from Tennessee on May 12-14, 2017.

Saturday’s win didn’t come easily but showed resilience. The Cats fell behind 3-0 in the second inning before tying it an inning later, punctuated by Austin Schultz scampering home on a groundout to the catcher by T.J. Collett. Schultz later saved a potential run with a diving catch in centerfield.

Top 2nd – Keefer walked and Swanger reached on a soaring fly ball that fell for a hit. Cepicky tripled to LCF, scoring both runners. Cepicky scored on a SAC fly. Missouri 3, UK 0.

The Cats will look to sweep the opening SEC series on Sunday afternoon. First pitch is set for noon ET. The game will be aired nationally on the SEC Network. The radio call will be on the UK Sports Network.