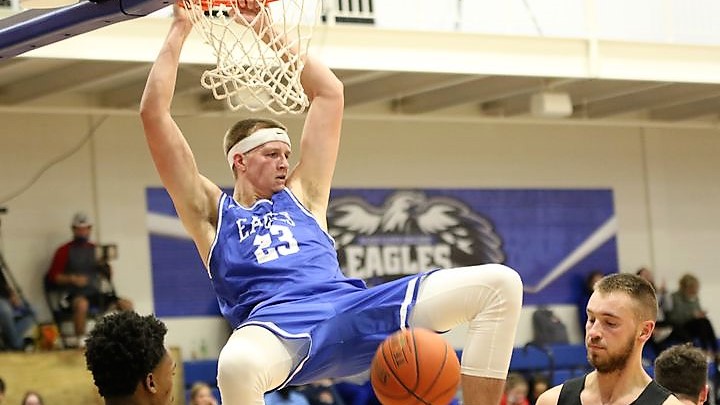 In the First Half, the game was close early before the Eagles tightened up on the defensive end. They would then go on a nice run to pull ahead by double figures. Bolstered by balanced scoring on the court’s offensive side, the hosts would take a 46-30 lead at intermission.

In the second half, the Knights would reduce the score slightly before ALC went on a run to increase the advantage to 20 points.

Even though the home club never lost their lead, KCU would continue to battle and would get within a bucket. Fortunately, the Eagles refused to break and sank their free throws to pull out the nice victory.

For ALC (2-0), they produced a balanced attack. They were led on the night by sophomore center Noah Caudill with 14 points and 7 rebounds. Senior guard Noah Young followed him with 13 points and 5 assists. Also hitting double digits was junior forward Colyn Sturgill with 12 points and sophomore forward Damon Tobler with 10. Tobler also completed the double-double as he grabbed 11 rebounds.

Junior guard Chandler Stewart and sophomore guard Jared Strickland both had 9 points while Stewart had 3 steals. Junior forward Will Philpot chipped in with 8 points and 7 rebounds.

The Eagles return to action on Saturday, November 7th, when they travel to Carolina University at 2:00 pm.