Back on Big Stage, Maxey Shines to Lead CATS Past No. 3 CARDS 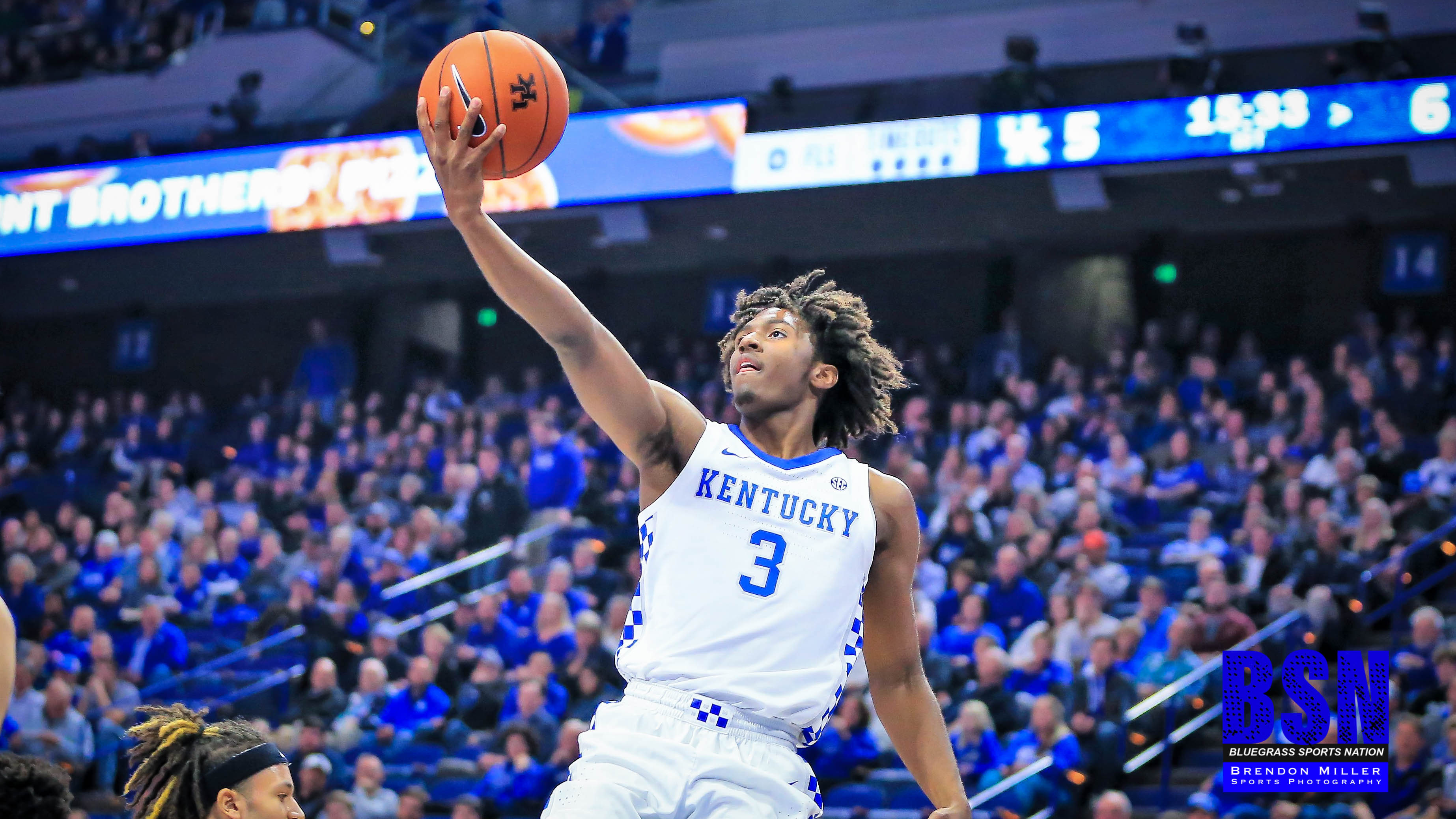 Tyrese Maxey is making it a habit of stepping up in big games. He did just that against Kentucky’s in-state rival Saturday.

The freshman guard scored a career-high 27 points to lead the Wildcats to a 78-70 overtime victory over No. 3 Louisville. Maxey broke a previous high of 26 he scored in the Wildcats’ 69-62 upset of then top-ranked Michigan State in the team’s season opener in November.

“I feel like I’m not afraid of lights at all,” he said. “My dad always told me if you prepare properly you’ll perform on the court and I’m not scared to make big shots and shoot big shots and do things for my teammates that I have to do. We needed it. Coach (John Calipari) always tells us we’re right there and I feel like we are.”

Although the performance was similar to his collegiate debut, Maxey “was just trying to get the ‘W.’”

“I had to make different plays, big rebounds, big sides, had to chase (Ryan McMahon) around, which was a really good player,” he said. “I feel like I did a pretty good job with him today. But like I said, I’m just proud of my teammates.”

The performance by Maxey helped the Wildcats (9-3) snap a two-game losing streak and gave the team a dose of momentum going into Southeastern Conference play. Maxey was named the Bluegrass Sports Commission Player of the Game after making 9-of-14 shots from the field and grabbing seven rebounds.

Maxey connected on four of the team’s seven 3-pointers in the contest, giving Kentucky its third straight win over the Cardinals. Kentucky coach John Calipari improved to 11-2 against his team’s top instate rival. Maxey’s family was in attendance and witnessed his career performance.

“It’s my dad’s first game and it was an amazing feeling seeing him over there,” he said. “My mom (was) here, my sisters and uncle, it felt amazing.”

“He’s good,” the Louisville coach said. “We knew that coming in. He’s an explosive scorer and like a lot of scorers sometimes take some difficult shots. At the same time we knew he was going to take them, guys like that don’t lose their confidence, usually (and) it was just a challenge. He’s good, his pull-up game, his ability to make threes was better than it had been.”

Calipari said the Wildcats “showed a will to win” against the Cardinals and didn’t panic after Wildcats missed two chances at the end of regulation to win the game.

“My mindset, we’re winning this game — that’s how I coach,” he said. “Until the game’s over, oh, we lost, now let me go watch the tape and figure that out. But my mindset is always we’re going to win this game. I may not be saying it to them but that’s what my mind is and that’s where I need them. Like I said, when we went in, hey, the tip-in didn’t go, fine. Let’s keep playing, this is a ball, let’s go, you can get these guys.”

Maxey wasn’t the lone standout for the Wildcats. Backcourt sidekick Immanuel Quickley followed with a career-high 18 points, followed Nick Richards with 13 points and 11 rebounds. Richards was instrumental in overtime, scoring seven points in consecutive fashion as Kentucky made six straight free throws in the final 27 minutes, including two each by Richards, Quickley and Maxey to overcome the gritty Cardinals.

“He (Richards) hooped tonight,” Maxey said. “I was really proud of him. Blocked shots, made big free throws, big layups, proud of him.”

Free-throw shooting was a difference-maker as Kentucky made 21-of-25 from the charity stripe, while Louisville was 9-for-20. Quickley was perfect on all eight attempts, while Maxey and Richards were a combined 10-for-13 at the free-throw line.

Quickley said beating the Cardinals was “as good as it gets, especially after coming so close to winning and not being able to get the job done in regulation with the tip-in not going in.”

Maxey missed a runner falling out of bounds on the baseline and Keion Brooks’ tip spun around the basket and out to force the first overtime game in the series since the 1983 “Dream Game” in the NCAA tournament.

“For us to be able to rally back shows how tough of a team we are,” Quickley said.

For Kentucky, the win was much-needed after the Wildcats stumbled in a two-game trek to Las Vegas last week, losing to Utah and Ohio State. Quickley said the Christmas break gave the Wildcats a chance to recover from the rare back-to-back losses.

As for Maxey, he plans to celebrate the win with his family.

“I can’t wait to go spend some time with them,” he said.