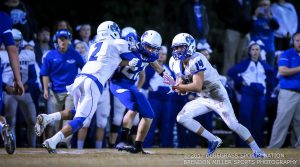 The regular season of KHSAA high school football has concluded, and the playoffs have begun.  Bluegrass Sports Nation continues our game of the week coverage, with the coverage of the state football high school playoffs.  Tonight’s game of the week featured the battle of the Bobcats, Bell County vs Breathitt County competing in the class 3A playoffs.  Both programs were once prominent programs with both winning several State Championships in Football, but have struggled recently.  Bell County entered tonight’s game with a six win and four loss season, finishing in fourth place of their district.  Breathitt County struggled early in the season losing the first five games, before winning four out of the next five.  Breathitt County finished the regular season with a four win and six loss campaign, finishing as the district runner up.

The game marked Bell County Head coach Dudley Hilton first time coaching in Jackson since he left Breathitt County in the 1980’s.  Hilton is a coaching legend and is one of the winningest coaches in the history of KHSAA football.  Hilton has 367 career wins entering tonight’s contest, and is in second place in all time wins, only trailing Belfry’s Head Coach Phillip Haywood.  Hilton was the head coach of Breathitt County for eight years, before taking the helm at Bell County.  The game was a home coming for Coach Hilton, who was Breathitt County’s first Head Football coach and met his wife in Jackson during the Coaches tenure coaching at Breathitt.  Coach Hilton was interviewed during the pre-game coaches interview recounting his time in Breathitt County, and talked about how Breathitt County holds a special place in his heart.  The videos are shared on the Bluegrass Sports Nation Facebook site, LIKE the page and feel free to share the videos and pictures.

As the third quarter started, I can only imagine the difference each team was feeling.  Bell County had to be excited having played a great game, with all cylinders clicking and a victory seeming inevitable.  Breathitt County playing at home and nothing going right, had to have a completely different perspective.  Coach Kyle Moore a former Breathitt County legend and two- time state champion has experienced the High’s and lows of Breathitt County Football.  Coach Moore was a reserve on the 1995 Breathitt County State Champion team and become the Starting QB on the team that repeated as State Champion in 1996.  Kyle was a vital member of the Breathitt County team that won forty- two straight wins before being defeated by Lawrence County on their home field in 1997.  Coach Moore took over the helms from KHSAA legend Mike Holcomb a couple years back and has struggled getting the Bobcats back to being a dominant and prominent program.  When the feeder program was cut from Breathitt County athletics, the results were devastating to the program.  Former players Kenneth Shorty Combs, Josh Barnett, Chirs Hollan and others have recently developed the North Fork Lumber Jacks Youth Football team.  The Lumber Jacks are the Future of Breathitt County athletics, and the future has never been brighter.  A lot of people surrounding the Breathitt County Football program are extremely optimistic on the future of the program.  I have covered the Lumber jacks in a recent game, and the hype is real.  Breathitt County may struggle a couple of more years, but once the Lumber Jacks make their way into high school players, I expect to see a much more competitive program. Bell County is in the second year of Coach Dudley Hilton.  Hilton won a state championship at Bell County earlier in his career.  Hilton left the Bell County program for a couple of years, and their program began to suffer.  With Hilton Being back in Bell County, the future of Bell County looks bright and look to be competitive for years to come.

Bell County has the game in hand and only needed one more point to force a running clock.  Bell County achieves the goal, forcing a running clock with 8:34 remaining in the third quarter.  Jordan Wombles scores on a seven- yard rushing touchdown.  Bell now lead 42-0 over Breathitt County.  The score was the only scoring possession of the quarter. Breathitt County continued to compete and had two great plays during the quarter but again were unable to score.  #19 Tyson Gross had a solid run gaining twenty- two yards, and #27 Jason Noble had a great run almost scoring on a forty- five- yard run, before being brought down at the Bell County fifteen- yard line.

Stats- Stats of the game have been provided By WJSN 97.3 FM Radio Host Steven Neace

Bell County advances to the second round of the KHSAA Class 3A playoffs with a rematch of district Rival the Corbin Redhounds.  Corbin won the first matchup with a 42-8 victory over Bell County on October, 13, 2017.  Bell County improves on the season with a 7 and 4 record.  Corbin will host Bell County next Friday November, 10, 2017.  Breathitt season is now over and their season ends with a four win and seven loss season.  Good Luck to Bell County Bobcats in their quest on winning the Class 3A State Championship.  Bluegrass Sports Nation will continue our game of the week coverage next Friday, Tune in as Brendon Miller will announce the game and location.