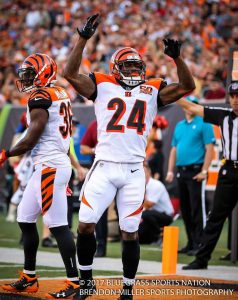 The Cincinnati Bengals’ preseason schedule should be two games and done. I say that because few things in life are more mundane than NFL preseason contests. Watching your third-string quarterback handing off to your fourth-string running back is about exciting as watching paint dry, grass grow, or looking at endless pictures of your baby nephew. The four-game preseason is essentially two games too long. After beating the Buccaneers 23-12 and losing to the Chiefs 30-12, the Bengals are now 1-1. I’ve seen enough already, so why can’t the real games begin?

It hasn’t all been for naught, though. As you know, I’m new to this NFL gig and have much to discover. According to Head Coach Marvin Lewis, I still don’t know the difference between A.J. Green or AJ McCarron. But thanks to Bluegrass Sports Nation, I now have the opportunity to experience the top echelon of sport. Just like Peyton and Eli, the Huang Brothers have invaded the NATIONAL FOOTBALL LEAGUE! Here’s a brief compilation of what I’ve learned in this initial two weeks on the job.

First of all, no NFL franchise worth a hoot is willing to show their hand during the preseason. Sure, the Bengals Defense got gashed, but they’re missing some key starters. You think Bill Belichick is tweeting out his defensive schemes in August for all the world to dissect? Likewise, Marvin Lewis revealed zilch in his recent post-game pressers. “I’m pleased overall with the football game and the fact that we got into some good situations,” he said after the victory over Tampa Bay. “I think that’s key. We got a good opportunity for our young guys to experience NFL football.” After the thrashing by Kansas City last night, the veteran head coach was even less forthcoming. When asked about his specific concerns regarding the team midway through the preseason, he answered dismissively, “You can’t gauge, and I’m not going to tell you what it is anyway.”

As football fans, we love to gauge, analyze, and overreact. Anticipation levels are high for an experienced team that was beset by several key injuries last year. Both exhibition games thus far have drawn over 40,000 fans, so you know the interest is there. AJ Reed is one of the top receivers in the league and tight end Tyler Eifert is a red zone machine. Quarterback Andy Dalton is more than serviceable throwing to established stars as well as the remaining corps of budding young talent. If the defense can hold its own, we ought to see Cincinnati back in the playoffs again despite the tough road within their division.

One thing that really needs to be decided in the preseason is who might end up as the Bengals starting kicker. The team used a fifth-round pick on Memphis kicker Jake Elliot, but veteran Randy Bullock was also picked up, and the competition appears neck in neck. I guarantee at least two games this year will hinge on whether the ball clears the uprights as the game clock winds down. The Bengals cannot mess this one up.

During this past week, I’ve also learned quite a bit about my own personal role on the NFL beat. It can be tough finding your way around unfamiliar press box seating charts, drink coolers, and clueless parking attendants–but I’m always up for a challenge. I leaned right away that I need to pace myself because it’s a long season. Don’t stuff yourself on the pregame media buffet because Skyline Chili’s coming at halftime.  “Put a little more cheese on that chili,” says a familiar voice from across the room. It’s Alan Cutler of WLEX fame doing his shtick for the Bengals Radio Network. It’s comforting seeing a familiar face—even if it is one like Cutler’s. “You’re stalking me, doc,” he chides, referring to our dual roles covering both the Wildcats and the Bengals.

I’m privileged this year to also have locker room access. An NFL locker room is just that—a place for the players to shower and change. There’s no room for modesty when operating within an NFL locker room. Just keep your head up and smile when conducting your interviews. I assure you that many insightful comments and numerous penetrating remarks will be coming from the bowels of the stadium this year.

The Bengals now go on the road at Washington and at Indianapolis to finish out the preseason. With apologies to those players fighting for a roster spot, I’d just as soon hit the fast forward button, skip these two glorified practices, and check back again on September 10 at 1:00 pm. That’s when the Baltimore Ravens pay a visit to Paul Brown Stadium to kick off the real season. If you can’t make it in person, just check in with me and I’ll give you a perfect view straight from the peanut gallery. See you then!