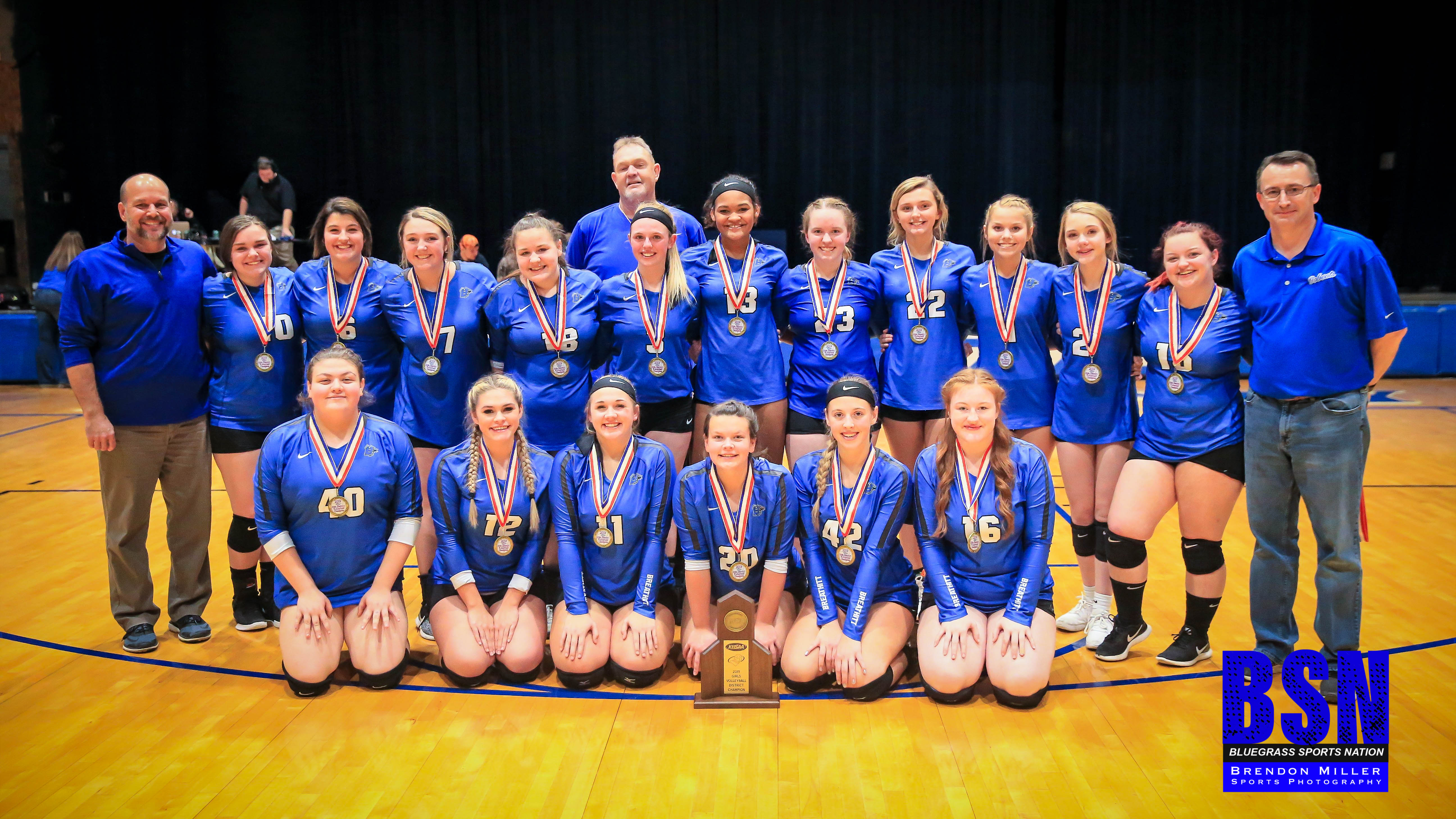 What promised to be a closely matched feline fight, turned in to just that tonight in the 55th District Championship Game at Wolfe County High School. The familiar foes squared off in their third match up of the season with the District Title and bragging rights on the line. The result was a truly noteworthy night and match.

Early, Wolfe surged into the lead in the first set, and eventually prevailed 25 to 17. Breathitt immediately bounced back to grab the momentum early in the 2nd set, and went ton to win sets two (25-21) and three (25-23) to take a two set to one lead. The 4-time defending Champs, the Lady Wolves, then rallied to take the 4th set, 25-19 to set up a winner-take-all 5th set.

The 5th set began with Breathitt controlling the play and gettin out to a large lead that eventually grew to 10-1. The Lady Wolves then clawed and scratched their way back to tie the score at 14 each. Breathitt won the final two points for the 16-14 set and match win. The VolleyCat faithful celebrated heartily in the stands and on the floor.

Breathitt was paced by outside hitters Kaileigh Brown and Adreonna Schutz who recorded kill after kill on sets by Emalee Watts. Adryona Salyers, Tory Gross, Chloe Richart, and Kenzie Robertson all played well. Wolfe was led by Hailey Stone who had a huge night. Ginger Johnson put in great work at setter with Ellie Haley digging dozens of balls in the back line with Kaylee Elam and Kilee Lawson smashing away at the net.

Both teams should be proud of a great performance. To be honest, no none could really really asked for any more from any one of the young ladies or either team. It is always a shame a team has to lose a match like this. Both will now advance to the 14th Region Tournament where each will be a force to be dealt with for whomever draws them.

The 14th Region Draw will be on Friday in Irvine and BSN will post the draw as soon as it is obtained. The tournament will also be in Irvine, next week.

Webcast of the match with Brendon Miller, Bradley Charles and Ty Back on the call!!

Thanks to our great sponsors of the 55th District action: First National Bank of Jackson, Family and Hometown Pharmacy, Tire Works and Hutch Autmotive, Wolfe County Farm Bureau, Whitaker Bank of Campton, and Mountain Homes, Inc.. Thanks for supporting the young people of Breathitt and Wolfe Counties!!!!