Cats Find a Way Without Fox 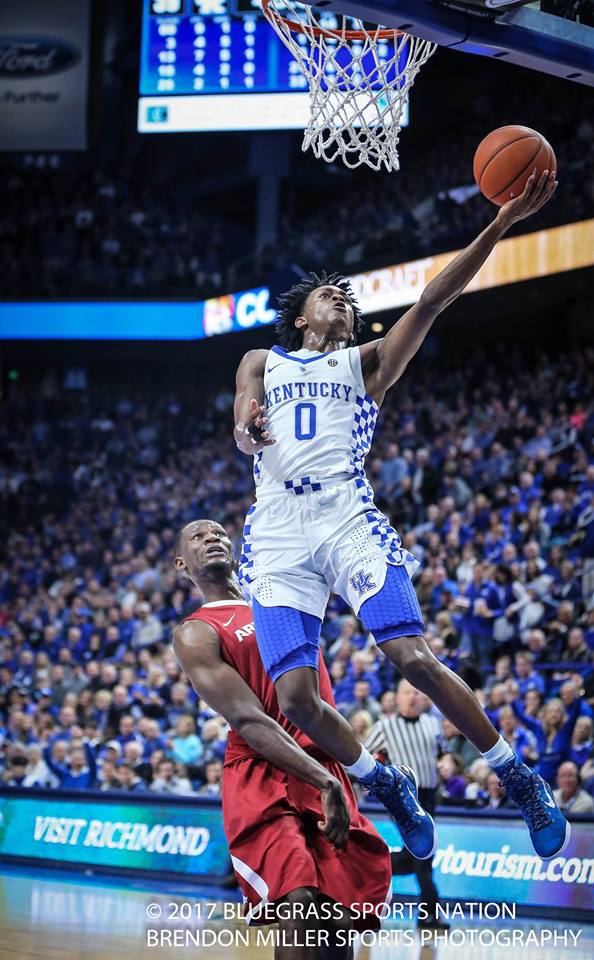 On Saturday night in Rupp Arena, UK loses it’s point guard, gets zero points and seven turnovers from Briscoe, Mulder was out due to sickness and the Kentucky Wildcats still defeated the number one defense in the country of the South Carolina Gamecocks 85-69.  This puts the Cats record at 17-2 and 7-0 in the SEC.

South Carolina’s starting point guard was injured late in practice yesterday and began having back spasms on the plane on the way to Lexington.  Despite efforts of the team training staff, P.J. Dozier was pulled out of the starting lineup and didn’t play against the Cats in Rupp.

The game started with Kentucky’s defense looking like the best in the country forcing 4 turnovers in the first 3 minutes and scoring the first 7 points of the game.  South Carolina’s first basket didn’t come until almost 4 minutes into the game.  At this point Kentucky was up 23-6 when Frank Martin called a timeout with 11:26 to go in the first half.  Out of the timeout, South Carolina upped its defensive intensity and brought pressure with a half court trapping defense, swinging momentum their way. At the 8:50 mark, De’Aaron Fox limped to the bench and did not return for the rest of the game.  South Carolina down 30-15 then went on a 12-0 run pulling to within 3 points of the Wildcats.  Ten of those points came off of UK turnovers.  Kentucky was not playing well at this point.  The Cats didn’t score for more than three minutes before Derek Willis hit a 3-pointer to give life back to the Cats.  Kentucky finished the half with a 47-38 lead.

The second half started with South Carolina pressuring defense and Kentucky’s defense giving up drives to the basket, prompting Cal to call a timeout with only 1:31 off the clock. UK would play the rest of the game with only one timeout available.  With Fox out with, Dominique Hawkins stepped into the point guard roll dishing out 7 assists on the night but picked up his 3rd foul with 17:51 to go in the game.  Briscoe moved to point but couldn’t find any rhythm all night.  Mychal Mulder wasn’t available due to sickness so Cal decided to slow down the offense. Something rarely if ever he has done with this team.   South Carolina was clearly out of gas with about 7 minutes to play in the game and the Cats pulled away.

With holes in the offense and a little bit of foul trouble, Kentucky got great play from probably it’s weakest overall position with Willis and Gabriel combining for 23 points on the night.  Malik Monk quietly scored 27 points on the night while Bam Adebayo was the second leading score on the team with 18.  Derek Willis led the team with 7 rebounds.  UK shot 58% from the field, 40% from 3-point range, and made 75% free throw and led from tip to horn.  Kentucky’s 85 points is the most given up by South Carolina this season.

UK’s next game is Tuesday on the road in Knoxville against the Tennessee Volunteers.  Tip off time is set for 9:00 p.m. on ESPN.  With Kansas coming up next Saturday, look for Fox’s status to be a game time decision Tuesday night.