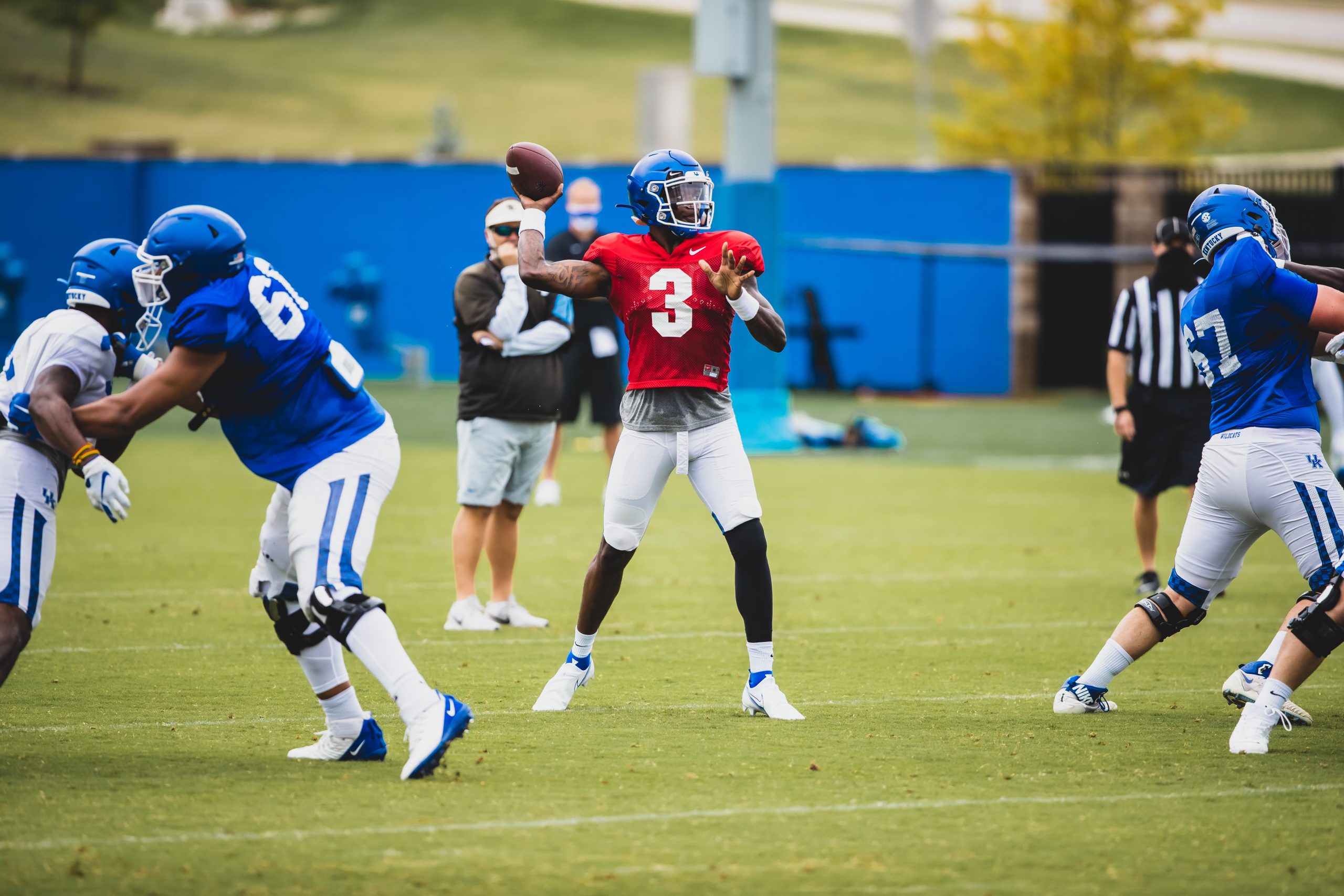 With the college football season essentially one month away, the Kentucky football team is hard at work.

The UK football team held an intersquad scrimmage at practice on Saturday. After the practice, head coach Mark Stoops, offensive tackle Landon Young, and defensive back Yusuf Corker addressed the media via Zoom.

Mark Stoops was pleased with how the practice unfolded: “It was a very good scrimmage today. It was good to get out there. We were fortunate; we caught a beautiful day (that was) overcast, dry, nice and cool. So, we were able to get a lot of plays in,” Stoops said.

While in many respects an intersquad scrimmage can be hard to analyze, Coach Stoops knows what he’s looking for. “Again, you’ve heard me say this before, but it’s so true. I’m looking for quality football; not one side having success because the other side missed an assignment. … I’d rather see competitive plays on each side, and that’s what we were looking for. We’re looking for good, clean football,” Stoops said.

By all accounts, QB Terry Wilson, who is coming off a season-ending lower-body injury, has played well in camp thus far. Wilson quarterbacked a few series in Saturday’s scrimmage and put together a couple of long drives before Coach Stoops decided to give some reps to other quarterbacks.
When the play broke down and Wilson was forced to run with the football during the scrimmage, Coach Stoops made sure his quarterback didn’t get hit: “I definitely tried to have a quick whistle on that,” Stoops said.
While Wilson is essentially at 100% right now, the Cats had to rely on a very run-heavy offense last season after he and Sawyer Smith were injured. Offensive tackle Landon Young believes that last year’s experience was very beneficial for the Cats: “That sort of adversity last year made us really hone in and realize that no matter the obstacles in the road that we have, that we can get together and we can still win games,” Young said.

While UK’s offensive line returns multiple players with NFL aspirations and is considered to be one of the best in the country, the Cats’ starting defensive line was also quite impressive on Saturday. Stoops said, “There were some good battles today, because I was impressed with our – in particular – our starting defensive line. Those guys are pretty stout and have done some really good things. … There were some explosive runs in there. I don’t think there was too many against the No. 1 defense, maybe a few good runs, but nothing extra long that I can recall here,” Stoops said.

Despite Kentucky’s recent success and the talent they return from last year’s team, the Cats have yet to receive the recognition from the national media that they feel as though they deserve. When asked about this perceived lack of respect, defensive back Yusuf Corker said, “We don’t worry about that. We know what we’re capable of and we’re just ready to prove them wrong.”
Thus far, all signs seem positive for the Cats. While they have a tough schedule in front of them, it’s also a great opportunity to take the program to the next level and prove the doubters wrong.