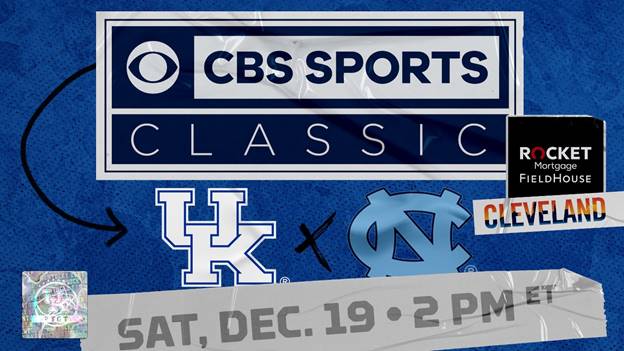 Wildcats will still play in the 2 p.m. game but will now face the Tar Heels instead of UCLA

The Kentucky men’s basketball team will play North Carolina on Saturday in the CBS Sports Classic in place of the originally scheduled matchup with UCLA. The game will remain at 2 p.m. at Rocket Mortgage FieldHouse in Cleveland with CBS still on the call.

UCLA will flip with North Carolina and play Ohio State at approximately 4:15 p.m. The revised schedule was created to more closely align COVID-19 testing protocols between the competing programs and their respective conferences.

North Carolina is off to a 4-2 start and ranked nationally in both major polls (No. 22 in the Associated Press Top 25 and No. 21 in the USA Today Coaches Poll). The Tar Heels’ two losses were to Iowa and Texas, who are both ranked in the top 15 of both major polls.

The Tar Heels return three starters from a season ago and welcomed in one of the top recruiting classes in the country. Senior forward Garrison Brooks leads UNC with an 11.8 scoring average and guards Caleb Love and RJ Davis have made immediate impacts as freshmen. Love and Davis are both averaging 11.2 points per game and lead the team in assists.

Saturday’s matchup will mark the third between the two schools in the CBS Sports Classic. UK won both prior meetings in the event. The Wildcats defeated the Tar Heels in a classic in Las Vegas in 2016 when Malik Monk scored a Kentucky freshman record 47 points and then bested UNC 80-72 in 2018 in Chicago with Ashton Hagans tying a school record with eight steals.

UK’s two wins vs. North Carolina are the Tar Heels’ only losses in the CBS Sports Classic. North Carolina leads the four schools with a 4-2 record. Kentucky and Ohio State are each 3-3 and UCLA is 2-4 in the event.

All-time, UK leads the series vs. North Carolina 24-16. Kentucky has won three of four overall vs. the Tar Heels, although UNC holds a 12-6 edge when the game is played at a neutral site.

The CBS Sports Classic annually brings together four of the nation’s most successful college basketball programs. The quartet owns a combined 26 national championships, with UCLA (11), Kentucky (eight) and North Carolina (six) ranking first, second and third, respectively, in NCAA history. Additionally, all four programs rank in the top six in all time Final Four berths, compiling 65 total appearances between them (North Carolina, 20; Kentucky, 17; UCLA, 17; Ohio State, 11). They are among college basketball’s all-time winningest programs, combining for more than 8,200 victories. UK is No. 1 all-time and UNC is No. 3.

Kentucky’s nonconference schedule remains among the most difficult in the country with the addition of the Tar Heels. This will mark the second AP ranked opponent UK has faced this season. Richmond is also receiving votes in the AP Top 25 and is ranked in the USA Today Coaches Poll. The Wildcats will play Louisville on Dec. 26 and host Texas on Jan. 30 in the SEC/Big 12 Challenge in Rupp Arena. Both opponents are currently ranked.

The Southeastern Conference schedule will get no easier for UK. Tennessee, at No. 10, and Missouri, at No. 16, are ranked among the AP Top 25. Three more teams in Florida, Georgia and Arkansas sit just outside the top 25 and received votes. Kentucky plays Tennessee and Florida twice. After already playing Kansas while the Jayhawks were ranked No. 7 in the AP Top 25 and based on the current poll, UK will have seven total matchups in 2020-21 against top-25 opponents.

Per the NCAA Division I Council’s framework for scheduling this season, teams can play a maximum of 27 games (24 regular-season games with one three-game multi-team event) this season. Kentucky’s previously scheduled game vs. Detroit Mercy for Dec. 15 has been postponed due to testing logistics, but the schools hope to reschedule later in the season.

The Wildcats’ full 2020-21 slate, with tip times and the TV schedule, can be found here. UK will be featured on national television in every game in 2020-21.

Kentucky, with one of the youngest rosters in all of college basketball, is off to a 1-4 start for the first time since the 1984-85 season. That team rebounded to make the NCAA Tournament and advanced to the Sweet 16.