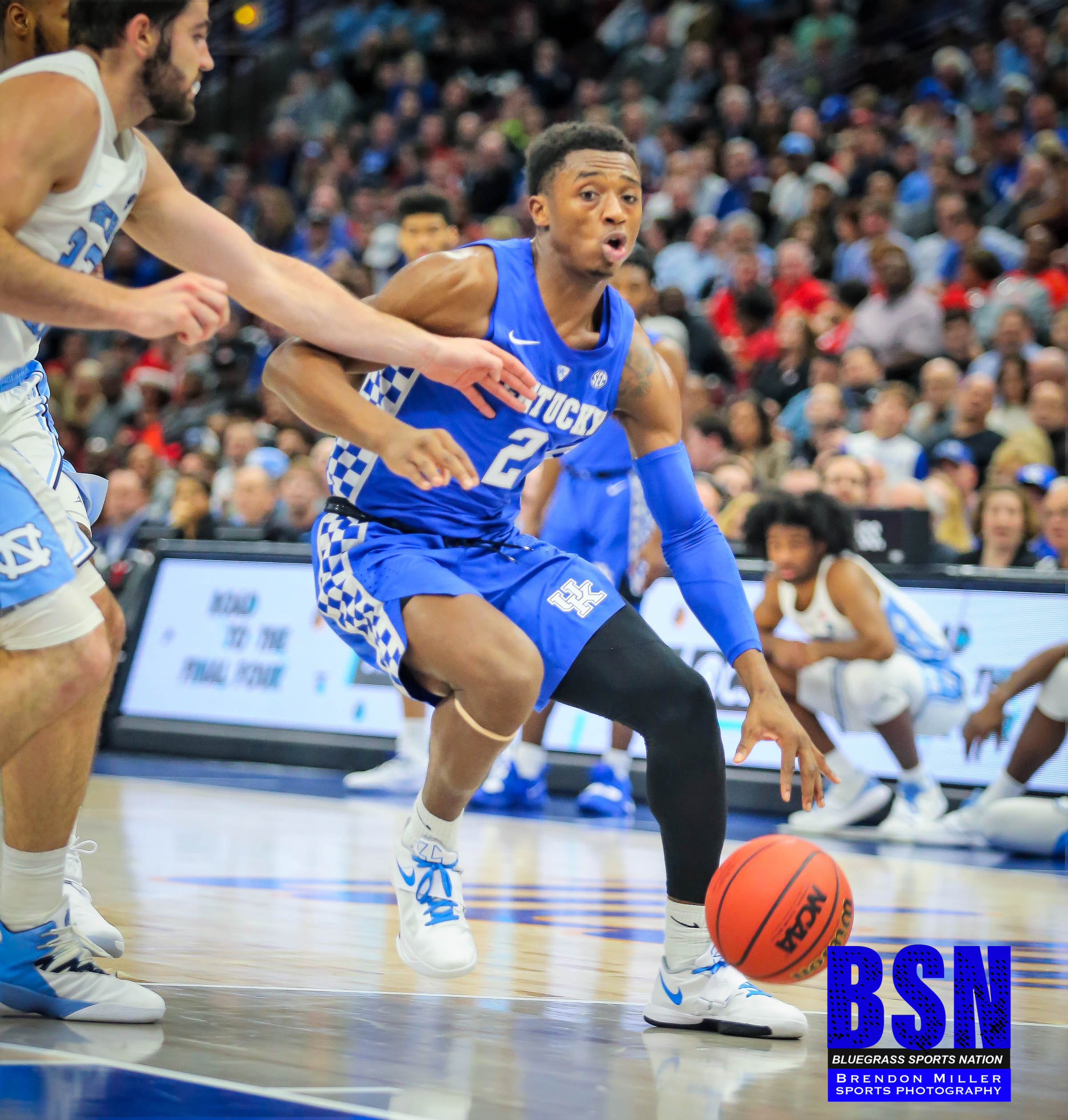 Travis Reid dominated the North Carolina front court by scoring 15 points in the first half and teammate Keldon Johnson scored 16 of his 23 points in the second half.  Ashton Hagans disrupted and pressured the North Carolina guards the entire game with his constant on the ball defense with steals and deflections. Despite curling his ankle, Hagans held Tar Heel guard Colby White to a season low 8 points.

Kentucky took a 9-point lead to half time and with stood a Tar Heel run mid-way through the second half after Keldon Johnson drilled back to back 3- point baskets.  North Carolina cut the lead to six, but the defensive minded Ashton Hagans helped get back the Wildcat lead to 11 after two steals.

North Carolina had a strategic game plan, which UK challenged stepping up their defense behind the arc, forcing North Carolina into shooting contested outside shots. UK’s three -point defense has been a sore spot for the Cats this so season but was much improved in this game.

“We shot too many 3’s as we wanted too, but North Carolina, plays in a way that kind of forces you to shoot 3’s.” said Coach Calipari.  UK freshmen Keldon Johnson led the charge connecting on 4-7 of his three- point attempts and Tyler Hero knocked down 3 of 8 on his long ranges shots behind the arc. The Wildcats held on for the win despite making just 9 of 26 three-point baskets.

UK won the game on the glass by outrebounding the Tar Heels 43-33 and slowing down a fast-paced UNC squad to a season low 72 points after averaging a nation leading 94.3 points per game.  The Kentucky defense stepped up in this game with a season high 9 blocks and 11 steals. Coach Calipari quest for improvement is through defense.

“If they (UK) become a defensive – rebound minded team, That’s what it is all about.”

“I think our offense is good enough.  We were so bad the first 2/3 weeks, That’s on me (Calipari).  This is a good win, but we have another one coming up”.

Cameron Johnson led North Carolina with 17 points followed by Luke Maye 16 points. Both the Tar Heels and Wildcats each committed 18 turnovers. The Wildcats held on for the win despite making just 9 of 26 three-point baskets.

Coach Calipari continued to highlight the progression of this year’s team.  “We are not the same team, we were two weeks ago. It’s not really close.  Hopefully two weeks from now, we won’t be the same team we are today. “

Coach Calipari alluded to a previous Seton Hall game/loss.  “You have games that kind of tests that show you.  We lost to Seton Hall, but we got better between the week before Seton Hall and after.” If a victory is any indication of the test, the young Wildcats has displayed their passing grade with their first victory over a ranked opponent this season.

Coach Calipari understands that Wildcats are continuing to progress positively, through a win or loss. “We have the greatest fan fase (Big Blue Nation) in the country, but, they (BBN) always want to win by 25.” “If you lose a game, you will have the outliners who try to create issues.  None of us listen to them but this is every year I coach.”

Coach Calipari gave high praise to several of his players who were preforming as expected.

“P.J. did a little bit of everything, He scored, he rebounded, he had assists, but that’s who he should be,” said Coach Calipari. “I took him out (Washington), I didn’t think he was playing hard enough. ‘You are out’, I am not playing you”.  ‘You either going to compete, or you will not play’.  Second half, I felt He (Washington) competed the whole time.”

Calipari strategy must have been successful for sophomore forward for Washington. He was 5-8 from the field, collecting one 3-pointer, snatching 9 rebounds, 8 assist,2 blocks for a total of 11 points in the contest.

When Coach Calipari was asked about which of his players may be forming into a team leader, graduate transfer Reid Travis was thrown in the conversation.

“If you come to our practices, He (Reid), is so focused, works so hard and gives everything he can.  I had a coach walk in the other day (practice) and said, ‘He (Reid) never takes his eyes off of you, when your coaching’. “

“Now, we have a lot of freshman, who do, take their eyes off of me (Calipari), and sometimes turn their ears off, but he (Reid) has been a beast that we generally don’t have.”

No substitute for experience, for graduate transfer Reid Travis was 6-13 Field Goals, 1 out of 3 in three- point land, 7-11 Free Throws, 6 rebounds, 3 assists for a total of 20 points.

Freshman Guard Keldon Johnson took honors as high scorer and finished the game with 23 points, 8 of 7 at the charity line, 4-7 from the arc, 3 rebounds, 3 assists,

If the collectiveness and consistency continue to prevail with this young orientated team, the light at the end of the tunnel becomes brighter and brighter in the Windy City.

North Carolina leads the series over Kentucky 25-16. Both Kentucky and North Carolina will play their next games Saturday, December 29 as UK will face in-state rival Louisville and UNC will match up against Davidson.