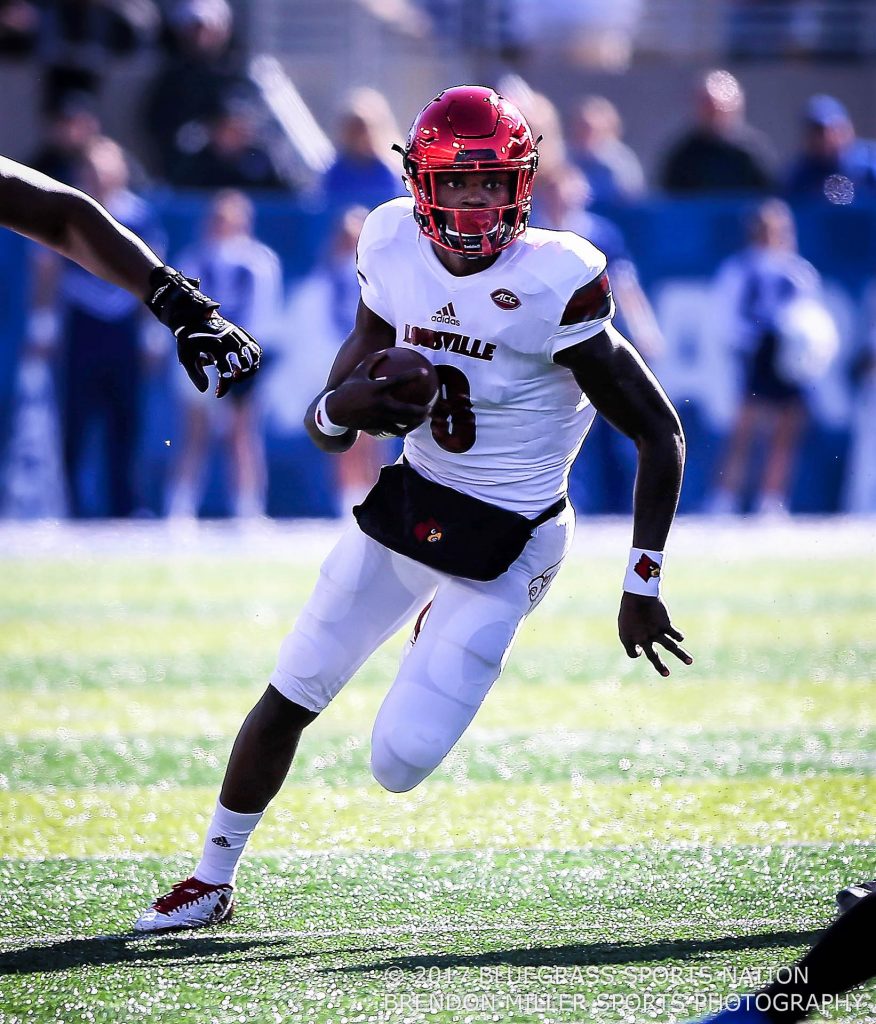 Louisville drops the hammer on the Wildcats – Photo by Brendon Miller

The much anticipated annual grudge match between the CATS and the CARDS, turned into a rout at Kroger Field this afternoon, as CARDS quarterback Lamar Jackson looked the part of a possible repeat Heisman winner.  THE CARDS hammered the CATS 44 to 17 in a game that was not effectively that close.  THE CATS knew coming in that they would have to try to slow down Jackson the powerful CARD offense, but the game plan simply did not work.

The CARDS took the opening kickoff and marched 75 yards on 7 plays in 3:57, and took the lead on a 18 yard Reggie Bonnafon run.  The CAT did not respond as they went three and out on their first possession and gave the ball back to the CARDS on their 31.  Jackson again easily led the CARDS down the field with receivers basically uncovered, and after 9 plays, Dae Williams made it 14-0 on a 1 yard plunge.  Down 14-0 the CATS put together their only significant touchdown drive of the day, going 80 yards on 7 plays, mostly on the back of Benny Snell, who finished off the drive with a 2 yard touchdown.  At that point it looked as the CATS had grabbed the momentum and established Snell and the ground game.  The CATS were able to hold the CARDS to a field goal on their third drive making the score 17-7.  The CATS then had their opportunity to get into the game and used the ground game to again drive down the field as they embarked on a 15 play and held the ball 7:44.  The CATS had a 1st and goal on the 8 yard line, but a few back reads on the read option resulted in a field goal attempt, which the reliable Austin MacGinnis doinked off the right upright.  The game was effectively over at that point, and the rest of the day was for stats.

Though not getting much Heisman love this year, Lamar Jackson put up Heisman winning numbers, going 15 of 21 for 216 and 2 touchdowns through the air and 18 rushes for 156 yards on the ground.  Jackson had an incredible 189.3 QB rating.  Reggie Bonnafon carried 9 times for 63 yards and 2 touchdowns and receiver Jay Smith had 6 catches for 75 yards and a touchdown.  The lone bright spot for the CATS was again Benny Snell, how lugged the rock 29 times for 211 yards and both UK touchdowns.  Snell continues to set rushing records of UK and likely hold them all before he leaves Lexington.

The CARDS improved to 8-4 under Bobby Petrino, and will likely get a trip to a sunny bowl where Jackson can be showcased.  The CATS end the season at 7-5, and will await their holiday destination.