College Football – Cats Send Seniors out with a W 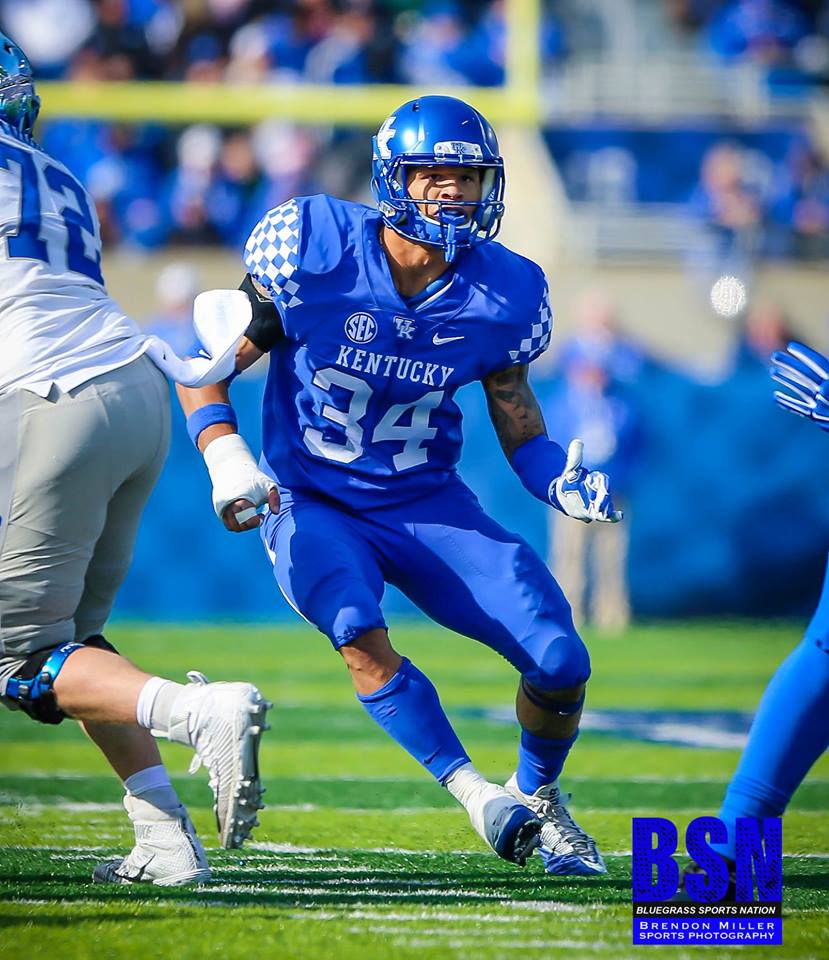 16 Seniors took the field for the last time at Kroger Field today. Some with hopes of playing professional football but all with the same goal of graduation. The Cats seniors have led the way to a 7-3 record and a national ranking of 20th coming into this week. In a season that has seen tremendous heights and heart-breaking lows one thing is for sure, this has been a season to remember.

The Cats have dropped the last two games to divisional opponents and even though they are eliminated from the college football playoffs they still have a lot to play for. Their opponent, Middle Tennessee has a lot to play for as well. They currently sit atop the Conference USA East Division and are bowl eligible as well with a 7-3 record overall. Although the underdog, the Middle Tennessee Blue Raiders wouldn’t have it any other way.

On the first pass attempt of the game for the Blue Raiders’ quarterback Brent Stockstill threw an interception to Mike Edwards who returned it 66 yards for a touchdown. With 13:33 left in the 1st quarter the Wildcats took the lead 7-0. Mike Edwards again showed why he is a future NFL defensive back as he forced a fumble on the very next possession setting UK up on the Middle Tennessee side of the field.

As they have all season, the Cats offense leaned heavily on the legs of Benny Snell. He would eventually punch it in from 7 yards out. The touchdown was Snell’s 43 of his career. The Cats extended their lead 14-0 with 8:36 left in the 1st quarter. This is the first time since September that the Cats have scored more than 7 points in the 1st quarter.

The Cats kept things rolling on the defensive side of the ball forcing another punt. This time however, the Blue Raider defense would bend but not break forcing the Wildcats to kick a field goal. Kentucky extended their lead to 17-0 to end the 1st quarter.

Middle Tennessee’s offense would come alive as they methodically drove 75 yards on 11 plays for their first score of the game. Brent Stockstill completed a 6-yard pass to Chaton Mobley out of the backfield for the score. The Cats still held a 10-point lead, 17-7. The Cats offense kept their foot on the throttle driving 75 yards in just 5 plays. Terry Wilson was forced to improvise as he rolled out of the pocket, he found his senior tightend CJ Conrad in the back of the end zone for a 11-yard touchdown. The touchdown marks CJ Conrad’s 12th touchdown of his Wildcat career and 3rd of the season. The Cats once again extend their lead 24-7.

The scoring flood gates seemed to open. Middle Tennessee was gifted a short field after a poor Kentucky punt. Middle Tennessee used 5 plays to go 19 yards before settling for a 33-yard field. The score cut the Kentucky lead to 24-10 to end the half.

Benny Snell at the half had 85 yards rushing on 12 carries adding a touchdown to his already historic career. Terry Wilson was efficient in the first half completing 4 of 7 passing for 31 yards and a touchdown. The Wildcats rushed for 152 yards in the first half. Mike Edwards forced a fumble and returned an interception for a touchdown in the first quarter.

Middle Tennessee’s Brent Stockstill had a solid first half completing 10 of 12 passes for 127 yards and 1 touchdown. His first pass of the game however was a pick six for the Wildcat defense. If the Blue Raiders were to make a comeback in the second half, they would have to rely heavily on the arm of Stockstill.

To open the second half Kentucky got the ball on their own 17-yard line. The Cats drove the length of the field in 9 plays and again gave the rock to Benny Snell who punched it in from 6 yards out. Kentucky seemed to have complete control up 31-10.

Middle Tennessee answered on the ensuing drive. Stockstill orchestrated a 11 play 75-yard drive that culminated on a 10-yard touchdown pass to Ty Lee. Heading to the 4th quarter the Cats maintained a two score lead 31-16.  Stockstill has erupted in the second half completing 20-23 for 240 yards and 2 touchdowns. Middle Tennessee’s offense with a quarter remaining had put up 353 yards of offense. The Wildcat defense that started so strong now started to show signs of fatigue as they had been on the field for 25:57 through 3 quarters of play.

The Blue Raiders cut the lead to 8 with 13:18 seconds left in the game. The Wildcats continued to be conservative offensively. Offensive Coordinator Eddie Gran chose to run the ball on a 3rd and 6 that went absolutely nowhere. The Cats only burned 1:36 off the clock and was forced to punt after just three plays.

Middle Tennessee took over on UK’s 41-yard line and looked poised to tie the ball game. That was until Josh Allen decided to take the game over. The nation’s best pass rusher ended any hope of a Blue Raider come back with two sacks in the fourth quarter. The two sacks made gave Allen the all-time sacks leader at Kentucky with 27 ½ sacks for his career. For the season Allen now has 75 tackles, 17.5 tackles for a loss, 13 sacks, five forced fumbles, and two fumble recoveries. When asked about Allen’s performance Coach Stoops said, “I can’t say that I have (coached a defensive player who has had a better season), I’ve had a Thorpe winner and a couple runners-up and been in the Thorpe several times. But just the way he impacts the game being a big guy, he’s really remarkable. And he’s so unselfish.”

Middle Tennessee did indeed start passing the ball. In fact Brent Stockstill threw 33 passes and completed 30 of them for 293 yards and 3 touchdowns. He had success through the air that most offenses have struggled to do against the Wildcats’ defense. The one blemish on Stockstill’s day was his first passing attempt of the game. Kentucky capitalized on a tipped pass and Mike Edwards made them pay taking it back 66 yards. The defensive score turned out to be the difference in the game.

It may have not been a pretty ending but a win is a win. The sweet taste of victory is even sweeter when it comes on senior day. Although the Wildcats celebrated 16 seniors they may also lose junior running back Benny Snell after the season. Snell one of the nation’s top running backs may elect to enter the NFL Draft and forgo his senior season. In Snell’s Wildcat career he has rushed for 100 yards 17 times and is 1 behind Sonny Collins for the school record. Benny now has 3,692 career rushing yards good enough for second place in school history (with a chance to break that record next week against instate rival Lousiville), with his 44th rushing touchdown he is now tied for 5th in SEC history, and he passed Tim Tebow for the second-most rushing TDs prior to senior season in SEC history.

8-3 is the Cats’ best record in 34 years. This is just the fourth time in the last 57 years that UK has won at least eight regular season games. The most significant stat is that Kentucky has improved their record every year that Coach Mark Stoops has been at UK. In 2013 the Cats won 2 games, five in 20014 and ’15, seven in 2016 and ’17 and eight in 2018. The Cats are also 6-1 at home this season, tying the school record for most home wins since Commonwealth Stadium/Kroger Field opened in 1973.

This season has been a special one to say the least but the Cats are not finished. They head to Louisville next week to end the regular season. Louisville is 2-9 and will be looking to end their season on a high note. UK can add to their 2018 resume by winning the Governor’s Cup in Louisville. Kentucky who is already bowl eligible will await for bowl selection to find out where they will play. As a 29 year old die hard Kentucky fan, I can say with confidence that this is by far the best season the Cats have had in my life time. Big Blue Nation has a lot to be proud of in these Cats and have a lot to look forward to as Mark Stoops continues to recruit top shelf talent.