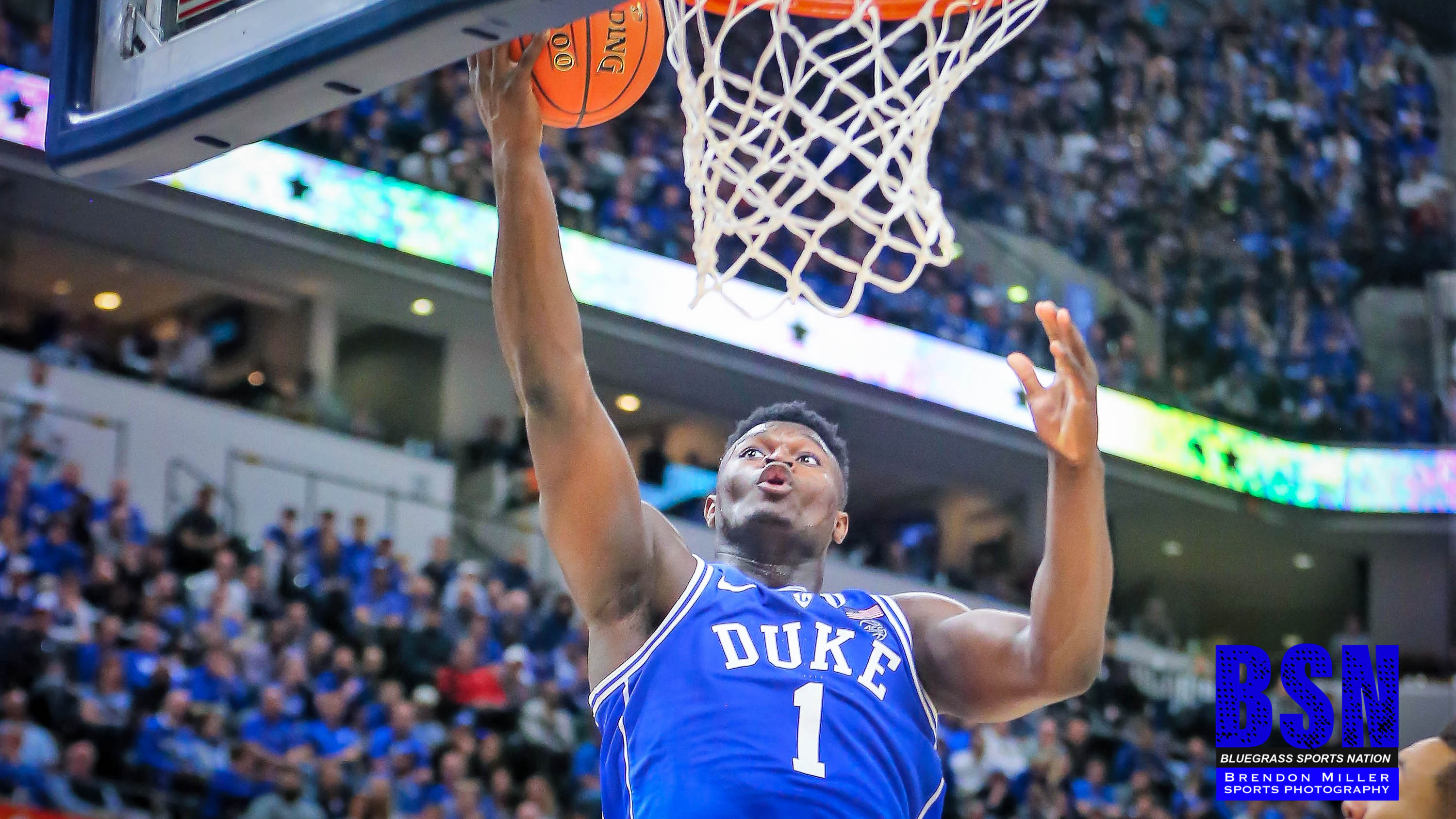 The 16th ranked Louisville Cardinals returned to action tonight at the KFC Yum Center hosting one of the hottest and most hyped teams in all of College Basketball, the #2 Duke Blue Devils. Tonight’s game against the Blue Devils is the only scheduled meeting of the season and the Blue Devils enter tonight’s contest with a 21-2 overall record and 9-1 in ACC play. Duke
is led by a trio of Phenomenal Freshmen in Zion Williamson, R.J. Barret, and Cam Reddish. Each player is considered a one and done prospect and most experts expect each player to be drafted in the top ten of the NBA Draft 2019. Zion Williamson is getting the most attention Nationally as he has constant highlights on ESPN’s Sports Center and is considered as the favorite for the Naismith Award the National Player of the Year and the likely first pick in the Upcoming NBA draft.

Entering tonight’s contest, the Cards are coming off an 80-75 loss at Florida State. Duke was currently on a seven-game win streak and defeated another ACC foe ranked #4 in the Virginia Cavaliers 81- 71 on Saturday February 9th , 2019. Duke leads the All time series with Louisville as Duke is 9-6 all time against the Cards. Duke is also on a two-game win streak against Louisville, but surprisingly Coach K has a loosing record against Louisville with a record of 5-6. Coming in, for Louisville to win the game tonight Louisville must control the boards, not turn the ball over and attempt to contain the Blue devils from running in transition. This Duke team is probably the most talented team Louisville has faced all season and will need to play their best game of the season to upset the Blue Devils.

The KFC Yum! Center was rocking with excitement in the first half as the CARDS hosted a blackout with 90% of the crowd wearing black to cheer on the CARDS. Louisville got the tip, but both teams opened cold, going several possessions without scoring. Cam Reddish of Duke opens the scoring connecting with a jumper from the top of the key. Duke led 2-0 with 17:32 remaining in the first half. On Louisville’s next offensive possession, the CARDS connect with a 3pt basket from Jordan Nwora. CARDS fans were excited as fans are on the edge of their seats, waiting for the Cards to make a run. Watching Williamson from media row the talented Freshmen has the makings of future NBA All- Start being the strongest and most athletic player on the court.

Midway through the first half Duke leads Louisville 21-20. The lead would be Duke’s last lead of the half as the CARDS played phenomenal basketball knocking down open three-point shots and forcing turnovers, leading to transition baskets. Louisville junior Steven Enoch was a star among stars for a couple of possessions. The talented forward made a three point field goal on one possession and finished the next play with a steal leading to a dunk in transition. Louisville’s Darius Perry finished the first half with a basket at the buzzer and the CARDS took a nine-point lead to the locker room. At the half Louisville led Duke 38-29.

Louisville opened the second half with a flurry as the CARDS quickly developed a comfortable seventeen point lead. Enoch, Jordan Nwora, and Dwayne Sutton lit up the scoreboard with multiple 3 pointers. Duke went cold from the field, struggling to score the ball at the first media timeout in the second half Louisville led 50-33. The decibel rating of the KFC YUM Center was at a season high as the entire CARD nation was on their feet with L’s in the air.

Louisville continued to play impressive basketball as the lead was 20 at 54- 34 with 13:34 remaining in the game. The CARDS looked to have the game in control, but the momentum began to shift, and it wasn’t in favor of the CARDS. With 9:52 remaining, Louisville had a commanding 23-point lead, but Duke began to cut the lead quickly as the three phenomenal Freshmen of Williamson, Cam Reddish, and R.J Barrett began to exhibit their immense talent. Duke begins to trap with a 2-2-1 defense and force the Cardinals into multiple turnovers, allowing easy baskets in transition. With 6:43 left, the lead was 16 and the CARDS began to look panicked and the shots Enoch and Nwora had made until this point were not falling.

The once ecstatic CARD Nation fan base couldn’t believe what was happening and suddenly the air was taken from the arena. Louisville led 66-59 with 3:42 remaining in the game, when Barrett got a steal and finished with a thunderous two hand dunk. As the game was winding down, a questionable blocking foul on Darius Perry put Reddish on the line shooting free throws, with the game tied at 69. Reddish connects on both free throws and Duke leads 71-69 with 14 seconds remaining. Louisville had a chance to tie, but Christen Cunningham’s shot was no good and Duke was able to completes the comeback.

For thirty-two minutes of the game Louisville was the better team against the National Title favorites. KFC Yum! was loud with an insane fan base watching the CARDS dominate coach K and the Blue Devils. For thirty-two minutes Louisville could not have played any better as the Cards limited turnovers, controlled the boards, and kept Duke’s star freshmen of Williamson, Barret, and Reddish in check. The last eight minutes of the game Louisville could not close out the game as the Cardinals could not have played worse and Duke could not be stopped. The Cards made careless turnovers, Enoch and Nwora were cold from the field, and the three Freshmen stars took over the game.

I’ve never personally witnessed a game like this with such a historic comeback and this game will be remembered for years to come as the day Duke was dominated for 32 minutes only to reverse the roles. Williamson, Barrett, and Reddish combined for 62 of the 71 Duke points. Williamson lead all scorers with 27 points, 12 rebounds and 3 steals, Reddish had a solid game with 22 points, 3 rebounds and 2 assists, and Barrett finished with 13 points and 4 rebounds.

The Cardinals were led in scoring by Jordan Nwora finishing the game with 23 points and 12 rebounds. Dwayne Sutton added points, and six rebounds. Steven Enoch finished with 14 points and 3 rebounds.

Louisville drops on the season to 17-8 record overall and 8-4 in ACC play. The Cards will continue ACC play in the next game hosting the Clemson Tigers. Duke improves on the season to 22-2 and 10-1 in ACC play. Duke returns to Cameron Indoor Stadium hosting the North Carolina State Wolf Pack. Please like, share and continue to enjoy Bluegrass Sports Nation coverage of the CARDS.