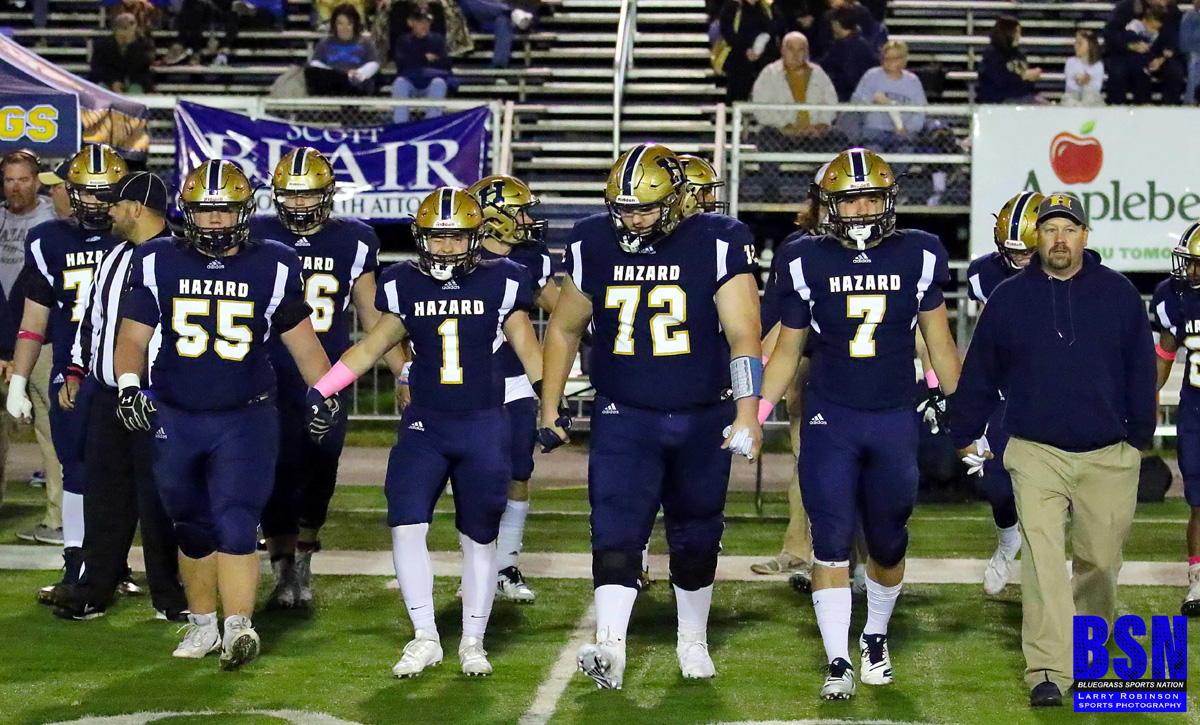 Two out of the last three weeks have been hard on the Bulldogs. Not only have they lost to their cross district rival the Pikeville Panthers, they also came up short against another Class A foe in the form of the Paintsville Tigers. Both games were very close contests that saw the Bulldogs with an opportunity to win on their last possession of each game. Last week’s Paintsville game saw Hazard claw back from a disastrous two minute and eleven second stretch to end the first half that saw them give up two consecutive touchdowns and a field goal just before the intermission. Hazard drove down with seconds on the clock in the fourth quarter to pull within 1 point but failed on a fake field goal that would have given them the lead and most likely the victory. The locker room afterwards was not as somber as it was reflective on how one had slipped away due to some hiccups in the first half. The general consensus of the players was that if they are able to play with the heart and passion they showed in the second half against the Tigers for the rest of the season, few teams would stand in their way en route to a deep playoff run. The Bulldogs showed some fight to come all the way back and that should give other teams reason to worry if Hazard is on their playoff schedule. They managed the comeback with a couple of key players having to sit out much of the second half due to some minor injuries, also. Those spots were filled with some underclassmen stepping up and holding their own to keep the Bulldogs in it till the end. For the next couple of weeks the Bulldogs will host some non-district opponents and that may give Coach Dixon a chance to hold some of his starters in order to heal up and get ready for the post season. First up for Hazard will be the Leslie County Eagles.

The Eagles will enter the game on Friday night with a 3-6 record. That record is deceiving when you look at their last 4 games. They have won 3 of those last 4 by an average margin of 28 points and only falling at home last week to Shelby Valley in what was a shootout 49-38. It looks as though Coach Eddie Melton may be getting all the pieces in place to make a late season run. The Eagle offense is led by QB #8 Zack Parker who has had a very solid year under center completing over 50 percent of his passes with 1,342 yards and 13 passing TDs. Through 9 games, the sophomore signal caller has only thrown 6 interceptions against those 13 TDs. The Eagles have been a “run first team” this season with 215 rush attempts for 1,308 yards. They will throw the ball about 40% of the time to keep defenses honest, though. The leading rusher for Leslie County is #24 Taten Smith who is averaging 7.6 yards per carry for 863 yards on 113 attempts. Their leading receiver is #4 Dylan Adams who has hauled in 26 passes for 501 yards and 6 TDs. Defensively the Eagles have struggled at times this season giving up 287 points over 9 games.

The Bulldogs limp into the contest sitting at 4-3 on the season. Hazard has not played bad this season and have lost 3 games by a total of 21 points. Those close loses have all been to very good teams. If these Bulldogs want to be considered in talks for a deep, post season run, they will have to take care of business the rest of the way through this 2018 regular season.

Offensively, Hazard has been very solid against some very stingy defenses this year. They have gained 2,737 yards on the year with 1,174 of those coming through the air and 1,563 on the ground. Seniors Bailey Blair and Skylar Pelfrey have led the way on the offensive side of the ball with Blair throwing for all but 72 of the 1,174 yards through the air and Pelfrey gaining over half the yards on the ground with 833 yards rushing. Some hidden figures on the offense are the running backs that are trailing Pelfrey in total yards, but have been very effective in spelling the senior with little drop in production on the ground during his absences. Trajon Campbell, Reece Fletcher, and Bailey Blair all have over 200 yards rushing on the season for an additional 648 yards on the ground. Through the air, Blair has targeted 10 different receivers this season and has kept the defense spread out. Senior Andy Baker is leading the receivers with 395 yards on 25 catches but another offensive weapon has popped his head up in the last couple weeks in the form of Isaiah Stupart. Stupart has been a catalyst for good things not only on the offensive side of the ball, but also has been a force on special teams and defense the last two weeks.

The Bulldogs have been successful so far this season with the formula Coach Dixon and staff have put together for this team. If they can weather these storms and finish strong this could be a very special season. In order to take care of the Eagles Friday night, Hazard will have to continue their dominance on the ground and control the pace of the game and time of possession. The defense will have to contain Taten Smith and limit his yards on the ground and put pressure on Zack Parker to make quick decisions in the passing game. The Bulldogs should match up very well with the Eagles in most positions and have a slight advantage in speed. Leslie County is always physical and Coach Melton will have them ready to play come Friday night. Weather could play a factor into the game as there is a 55% chance of rain at kickoff. This will make the running game even more important for each team. Kickoff will be at 7:30pm on this Homecoming Friday night for the Bulldogs. Check the Bluegrass Sports Nation website and Facebook page Friday night for pregame and post-game interviews with the coaches and Saturday for the photo gallery and the game recap.