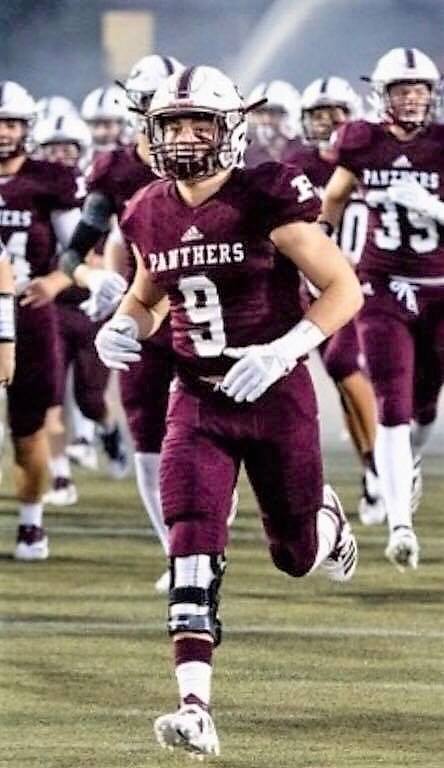 The Pikeville Panthers will be taking the field this Friday at 2 pm as they take on Beechwood in the Class 1A State Finals.  By now, most of you already knew that.  Most of you are familiar with names like Christian Billiter, Connor Roberts, Zach Roberts, and Bradyn Hunter just to name a few, but there is a very important piece to this Pikeville Team that you may not have heard of.  That would be Senior Campbell Dawahare.

Campbell is a multi-sport athlete who has accomplished many things in his athletic career, playing in several big games and making several big plays.  Campbell’s contribution to Pikeville Independent Athletics are too many to name, but what he has done this year, may be even bigger!!!

Campbell tore his ACL the summer before his junior year that kept him on the sideline.  Campbell didn’t complain or feel sorry for himself, he simply went to work.  In fact, he was able to get healthy and make his way on to the 4×100 and 4×200 Track Relay Teams, both of which won a regional championship.  If that wasn’t impressive enough, the 4×100 team went on to place 3rd in the state championship track meet.

Dawahare showed up this summer after an incredibly successful offseason ready for his senior year of football.  As summer workouts took place, Campbell was playing defensive back and slot receiver during those practices.  That was until Pikeville’s first 7 on 7 passing camp… In a 7 on 7 match against Paris, Campbell twisted his knee and again tore his ACL that had been surgically repaired just a year prior.  Again, Campbell could have felt sorry for himself and given up on his high school football career, but that’s not Campbell Dawahare.

Campbell instead braced up his knee and played.  Not only has he played, but he has played well.  To play football with a torn ACL is nothing short of heroic, but for a wide receiver/defensive back to play without an ACL is nearly unheard of, but Campbell has done it.   He has pushed through the pain not only for himself, but for his teammates, giving everything, he had for a common goal…. WIN A STATE CHAMPIONSHIP!!!!

Campbell played through the toughest part of the regular season, taking on teams such as 3A Powerhouse Belfry, and West Virginia’s Point Pleasant.  Despite recommendations from his doctor to stop playing before he damaged the knee further, Campbell suited up one last time, against District rival, Hazard.  Campbell played admirably in the Panther win.

When I asked head coach Chris McNamee about Campbell, he had this to say, “I was Campbell’s next-door neighbor for several years.  He was the fifth Dawahare child, and the first boy.  He comes from a great family that has instilled in him a commitment to God, his family, and community.  He is an extremely hardworking young man.”  Coach McNamee went on to say, “He wanted to play regardless of his situation.  His parents agreed to let him play the first half of the season.  He knew he was limited in what he could do but gave 100% every day.  He made the decision that the Hazard game would be his final game because his knee was getting worse and the doctors recommended going ahead and getting it repaired.  He had it repaired a few weeks ago and has not missed a practice.  He continues to lead and be a positive role model for other members of the team.”

Campbell may not physically be able to play but his maroon brothers have found a way to make that happen.  For the past several weeks, a different player has dawned Campbell’s #9 jersey on Friday Nights.  It’s a small gesture that has had a huge impact on an entire community.  Campbell may not be able to play, but his name has been called several times since his teammates have worn his jersey.  Just last week he was credited with throwing a touchdown on a halfback pass.  His work ethic and leadership has been infectious throughout the Pikeville roster.  Coaches brag constantly about his character on and off the field, players respect him, and the community loves him.

This young man has represented his family, team, community, and the mountains of Eastern Kentucky well.  He embodies what it is to be a “Mountain Boy.”  His selflessness and drive to be excellent is inspiring.  The future is certainly bright for this young man.  My mother used to say, “a child is the direct reflection of their parents, so everything you do, people will believe that’s how I raised you.”  I commend Campbell Dawahare’s parents for a job well done! We at BSN wish #9 Campbell Dawahare the best in his future endeavors and look forward to seeing him on the sideline this Friday at the State Championship game!