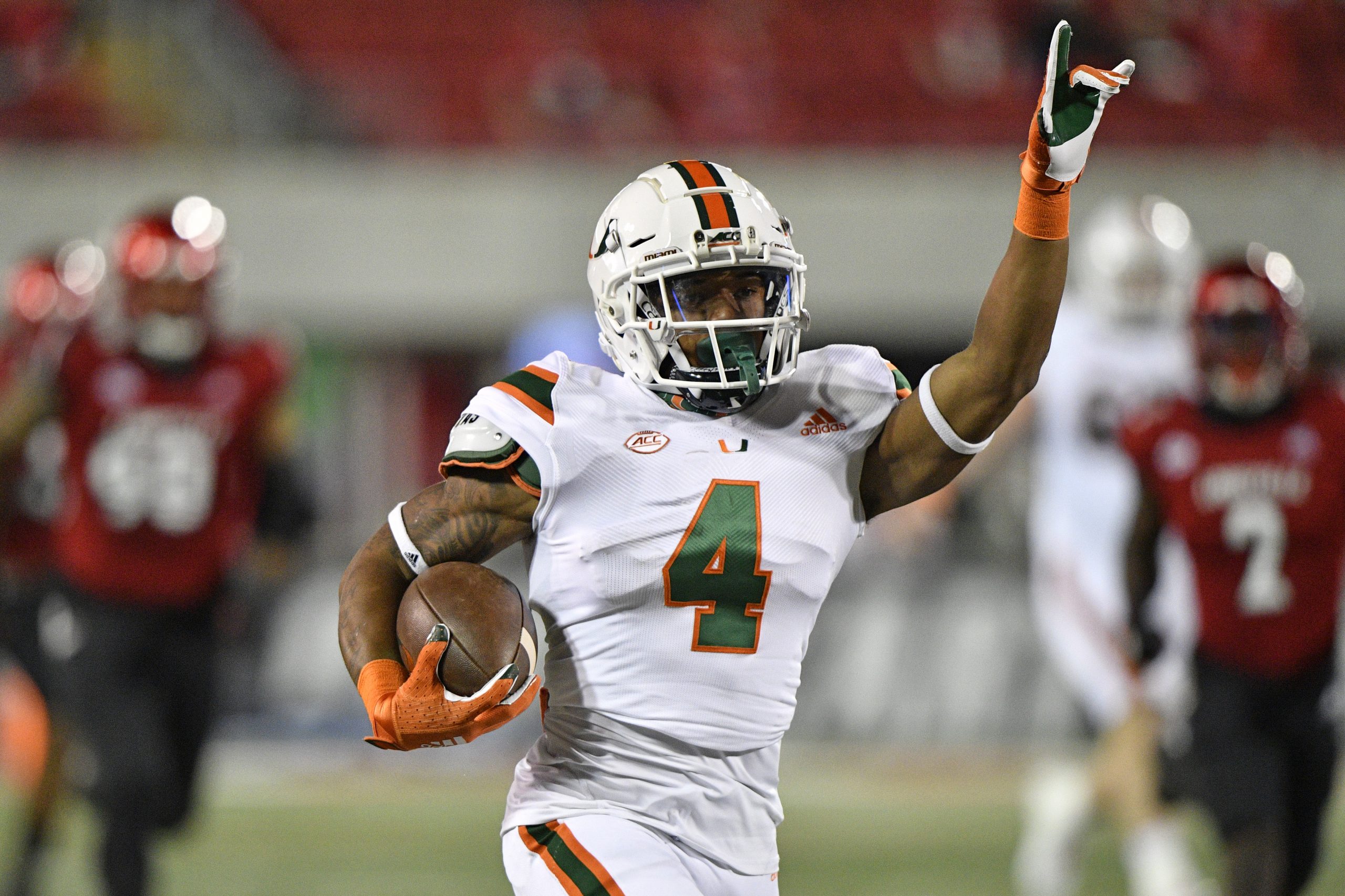 Coming into Saturday Night’s prime time match up, both teams were 1-0. As the week progressed, the fans were looking for a good game. The Cardinals led in the majority of the stats and lost the game with a final score of 47-34. The game seemed to be in reach of a Cardinal victory but was denied by the Hurricanes. Did the Cardinals lose the game or did they get beat?

The Hurricanes receives first and they wanted to set the tone by moving quickly. However, the Cardinals defense pressed on forcing Miami to two penalties and into a punt situation. The Cardinals came on strong and moved into scoring position but were unable to convert and settled for field goal with a drive of 40 yards on 8 plays taking the lead 3-0. Miami answers back on their 2nd drive. Miami QB King #1with a pass to Mallory #85 for the TD and #30 Borregales for the extra point taking the lead at 7-3. The Hurricanes scored a second time in the first quarter making the score 14-3.

The Cardinals were only able to get three more points in the 2nd quarter and Miami gained six more points on field goals. Miami’s defense gave Malik Cunningham a run for his money but Cunningham really played fairly well with a few exceptions such as throwing a low pass on the run to Ean Pfeifer #14 which would have been a guaranteed touchdown. The big field goal of the first half came from Miami’s Borregales #30 with a 56 yard field goal! The score going into the half was at 20-6.

The second half was all back and forth. When the Cardinals closed the gap, the Hurricanes regained the spread almost immediately. Beginning in the 3rd quarter, Cardinals Running Back Javian Hawkins #10 gets jammed up and with a little footwork, changes his direction and scores on a 19 yard run. However, Miami answers in a big way! Hurricanes running back Cam’Ron Harris #23 scores on a 75 yarder ending with a dive into the end zone for a touchdown. The Cardinals answered after moving the ball down the field with a Cunningham – Atwell Combo ending with a 6 yard reception touchdown from Cunningham #3 to Tutu Atwell, the score now at 27-20. And for the second time, the Cardinals defense was caught asleep. Miami with back to back plays scores with almost an identical 75 yard touchdown reception from King #1 to Jaylan Knight #4.

The fourth quarter was much the same as the third with the two teams going back and forth but the Canes managed to force Louisville QB Cunningham to make some errors. As the game came to a close, Cardinals QB Cunningham connected with Atwell for a 20 yard touchdown making the score is 47-34. The Cardinals effectively execute an onside kick and take the possession. QB Cunningham lost the ball with 1:01 left in the game and Miami ran the clock down for the win with a score of 47-34.

The final stats show the Cardinals ending with 516 total yards compared to the Hurricanes of 485 yards. The Hurricanes had 325 passing yards to Louisville’s 307 passing yards, with both QB’s having three touchdowns with Cunningham having 1 interception. The Cardinals led in rushing with 209 to 160. Cardinals’ Javian Hawkins had 164 yards and Hurricanes’ Cam’Ron Harris had 134 yards both having 1 touchdown. In receiving yards, Louisville’s Tutu Atwell had 114 yards with two touchdowns and Miami’s Brevin Jordan #9 120 yards and 1 touchdown. So why was the outcome different? Well In the end, the major differences were the Cardinals 3 turn overs, Miami’s kicker Borregales with 4 field goals of 48, 57, 22 and 40 yards! D’Eriq King took command and converted quickly while the Hurricanes defense did a great job keeping Louisville’s offense on the field. The Cardinals were in possession 16:02 longer than the Hurricanes, that is one quarter of the game and Miami’s defense did their job keeping the scoring down when it counted. Were the Cardinals a different team against Miami than they were against Western Kentucky University? Did they not playing the game they are capable of or was Miami just too much for them tonight? I’m leaning towards the later! The Cardinals played well; they just didn’t convert when they needed to. Take away the field goals of 12 points and add the low pass of for the touchdown giving the Cards an extra 4 points and the final is 38-35 with a Cardinals Victory. But let’s not beat down the Cardinals, they played, they never stopped playing but they were out played and that’s football! Whichever way the wind blows, the Hurricanes brought a little “Sally” with them and held the Cardinals at bay for the entire game. Keep your head up Cardinals; a loss doesn’t define you, your character does! It is time to focus on the next game. Until next time… practice hard, play hard!