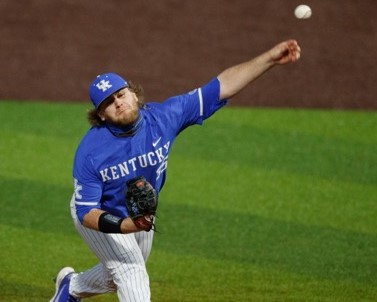 The Kentucky baseball team remained perfect on the season with a 6-3 victory over Eastern Kentucky on Tuesday at Kentucky Proud Park, giving the program its best start since the 2012 campaign.

The top of the Wildcats’ batting order delivered throughout, including sophomore outfielder John Rhodes’ two-run, go-ahead home run in the fifth inning, as the Cats’ moved to 5-0 on the season. Rhodes and senior first baseman T.J. Collett each drove in a pair of runs, while junior utilityman Austin Schultz reached base three times, twice igniting scoring rallies.

The Cats got on the board early for the fifth straight game when Schultz tripled and scored on Collett’s single. Freshman infielder Reuben Church then slammed the second triple of the inning – and his sixth extra-base hit of the season – to drive in another run and make it 2-0 after an inning.

Freshman pitcher Ryan Hagenow (2-0) worked his way through four innings, allowing just one run on five hits, before EKU touched up the bullpen for a pair of runs in the fifth to tie the game. UK responded quickly when Schultz led off the home half of the inning with a hit by pitch and then Rhodes blasted his second home run of the season, this one into the right-field bullpen.

From there, left-hander Cole Daniels and right-hander Sean Harney slammed the door on the Colonels. Daniels turned in three perfect innings, striking out seven, including six straight. Harney earned his second save in as many games by striking out the side in the ninth, as the Cats punched out 11 of the final 13 EKU batters to come to the plate.

The Cats return to Kentucky Proud Park on Wednesday afternoon vs. Evansville. First pitch is set for 4 p.m. ET. The game will be aired on SECN+. The radio call will be on the UK Sports Network.