Kentucky to Begin Season at No. 10 in Associated Press Top 25 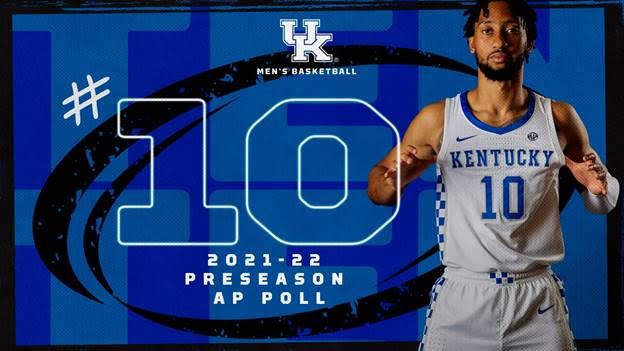 For the 12th time in 13 seasons under head coach John Calipari, the Kentucky men’s basketball team will begin the season among the preseason top 10 in the Associated Press Top 25. The Wildcats were tabbed No. 10 for the second straight year.

Gonzaga begins the season as the preseason No. 1 ranked team. UCLA, Kansas, Villanova and Texas round out the top five. Michigan, Purdue, Baylor and UK’s season-opening opponent in Duke at No. 9 complete the top 10 alongside the Wildcats.

The full preseason rankings are available via collegebasketball.ap.org.

Calipari has had a team ranked among the top 11 in the preseason poll in all 13 seasons at the helm as voted on by a panel comprised of media members throughout the country.

Other preseason rankings have the Wildcats ranked No. 9 by ESPN, No. 13 by Blue Ribbon magazine, No. 14 by CBS Sports and No. 17 by KenPom.com.

The USA Today Coaches Poll is expected to be released soon.

Seven Kentucky opponents enter the 2021-22 season ranked in the AP Top 25, including three nonconference opponents in Kansas (No. 3), Duke (No. 9) and Ohio State (No. 17). Notre Dame and Louisville sit just outside of the top 25 and are receiving votes to begin the season.

In addition to the Wildcats, the other Southeastern Conference programs ranking among the top 25 to begin the season include Alabama (No. 14), Arkansas (No. 16), Tennessee (No. 18) and Auburn (No. 22). Two teams in LSU and Mississippi State are receiving votes. Kentucky plays Alabama and Tennessee twice. Based on preseason polls, UK will have nine total matchups in 2021-22 against top-25 opponents.

The Wildcats will enter the 2021-22 season as a Final Four contender with one of the nation’s most experienced teams in the country. UK’s roster currently features a sixth-year graduate, a fifth-year graduate, two redshirt juniors, five juniors, a redshirt sophomore, two sophomores, and three highly touted four- and five-star freshmen.