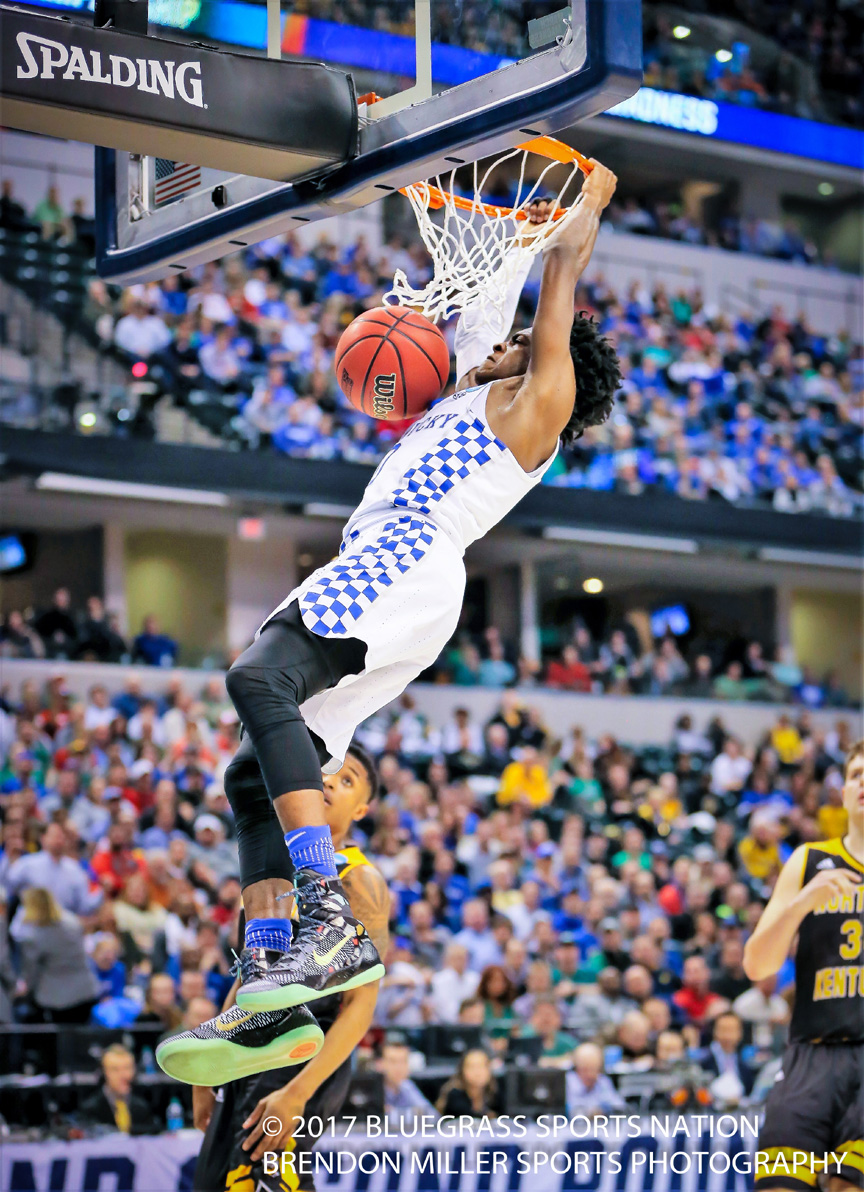 Basketball hysteria is a common theme during the month of March in Kentucky.  People from all over the country get involved in the NCAA Tournament and Kentucky is one of the higher seeds in the Tourney, with the fans not only expecting final fours but National Championships.   Kentucky has a rich tradition and has a rabid fan base that packs arena’s and is always one of the top ranked teams in the NCAA Tournament.

Kentucky entered the NCAA tournament playing the In State School Northern Kentucky Norse.  Kentucky is a 2 seed entering the tournament and Northern makes their NCAA debut as a 15 seed.  Many players from Northern Kentucky are from the state, and most have dreamed of playing at a school of Kentucky’s caliber.  If  NKU was able to get the victory, it would truly be a Cinderella story and one of the biggest upsets in NCAA Tournament history.  Kentucky was hoping of advancing and winning the schools’ 9th NCAA championship.  Both teams had a lot to play for , and both teams showed a valiant effort, in trying to lead their respective teams.  Kentucky would prevail in a hard fought victory , winning the game by 9 points.  Kentucky 74, Northern KY 65.  Kentucky’s play regressed, as the last few minutes of Regulation the offense became stagnant and not moving the ball.  Northern was able to keep the game close as they were only down 8 points with 1:43 left in the game.

In the opening minutes of the first half , Northern played a close game with the Kentucky Wildcats.  The game was tied @ 7 with 17:16 remaining in the opening quarter.  UK was quickly able to gain the lead and with 12:30 left in the game UK was up by 8 points 20-12.  Northern Kentucky was able to keep the game close when a 3 point shot was converted.  Kentucky only lead by 4 points with 7:34 left in the half, 23- 19.  Northern Kentucky would go on to score 2 more points that were unanswered by UK, cutting the lead to 2 points.  UK finally woke up in the last 6 minutes of the first half  De’Aaron Fox found his way to the rim and took advantage of the smaller and not as quick NKU guards.  A play that excited the UK fan base happened with 5:55 left in the half as Derrick Willis Stole the ball, and found Fox in transition where he slammed the ball.  UK was up 6 points with 5:55 left in the half.  Kentucky would build on its lead, and entered the half with a 14 point lead.  Kentucky 38, Northern Kentucky 24.  Bam Adebayo and De’Aaron Fox lead the Kentucky scoring efforts with 10 points a peace.  Malik Monk, who can score baskets in a hurry is off to a slow start with only 5 points.  Northern Kentucky was lead in scoring by #34 Drew McDonald.

Kentucky started the game with Fox, Monk, and Briscoe at the guards and Willis and Adebayo at the forward Positions.  Northern Kentucky started the game with Garnett, Williams, McDonald, Murray and Holland.  From the start of the game it appeared that Kentucky should win the game, based on a size and talent standpoint, but Northern Kentucky didn’t make it easy for the Cats and challenged them often.

In the second half UK maintained a 15 point lead to begin the half.  Briscoe scores 2 points with 17:36 left in  the game putting the Cats up by 17 points.  NKU was able to answer with a 2 point basket , cutting the lead back to 15 @ the first TV Timeout.  Kentucky turned up its defensive intensity  as The cats were able to force NKU into a 10 second violation by trapping and pressing the ball.  The next couple of minutes neither team was able to score with the score remaining KY 52, NKU 39.  One of the most exciting moments of the game happened when Fox stole the ball, drove to the rim uncontested and slams the ball with a strong 1 hand dunk. The play excited the UK faithful with fans cheering and chanting the C-A-T-S chant. Northern was able to make the game interesting late, as the lead was cut to 12 points with 5:00 remaining in the game.  Kentucky got out of sync and reverted back to their ways that got them beat Often In early February.  Kentucky couldn’t score for several minutes, players were not cutting to the ball, and the game play turned lackadaisical, this allowed Northern to stay in the game.  If Kentucky plays this way against the next game and Wichita State Shockers, the season could potentially end earlier than expected as The Shockers can score in bunches and are a solid free throw shooting team.   Northern KY was able to cut the lead to 8 with 1:43 left in the game.  Kentucky 70, Northern Kentucky 62.  The game was still very much in the game at that point, But Kentucky would prevail as Adebayo made 2 free throws, and NKU ran out of time.  Kentucky goes on to win the game by 9 points, UK 74- NKU 65.

Stats for the game: