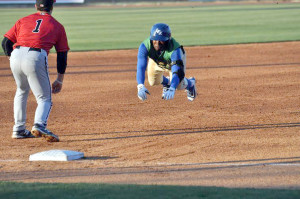 Lexington’s D.J. Burt made a headfirst slide into third base on his triple in the third inning.
Photo by Mary Lay, Lexington Legends

Torey Deshazier and Jake Kalish combined for seven and two-thirds innings of shutout relief as the Lexington Legends took a 3-1 win over the Kannapolis Intimidators Tuesday night at Whitaker Bank Ballpark.

D.J. Burt and Travis Maezes each had two hits and a run batted in for Lexington.

The Legends scored a run in the first inning when Burt doubled, stole third, and came home on a sacrifice fly by Samir Duenez.

Kannapolis tied the score in the second.  With one out, Antonio Rodriguez lined a pitch off the right arm of Legends starter Julio Pinto, who had to leave the game with a contusion of the forearm.  He is listed as day-to-day.   Rodriguez reached first on the hit.  After Deshazier relieved Pinto, a wild pitch allowed Rodriguez to move to second.  A two-out single by Landon Lassiter brought Rodriguez home with the tying run.

Maezes hit a solo homer in the bottom of the second to put Lexington back in front.  The Legends added their final run in the fifth when Maezes singled, moved to third on a single by Michael Hill and scored on Burt’s sacrifice fly.

Each team has won one game in the series, which concludes Wednesday morning.  Game time is 10:05 a.m.