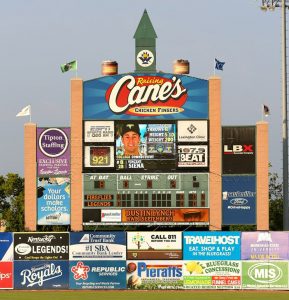 WHITAKER BANK BALLPARK (Lexington, KY) — Lexington Legends fans can mark their calendars for Thursday, April 5, 2018 when the Legends open their 18th season in Lexington, Kentucky at Whitaker Bank Ballpark and host their first home game of the 2018 season against the Charleston RiverDogs.

The 2018 season will be a milestone year for the baseball club that was established in 2001, as the Legends will welcome their sixth millionth (6,000,000th) fan. Follow the Legends on social media as they approach this stachetastic achievement.

Game times and complete promotions schedule will be announced later

Our rivals to the east, the West Virginia Power, are the Legends nearest South Atlantic League opponent and will make the most trips to Lexington in 2018 with three appearances: April 27-29; May 29-31 and July 19-22 for a total of 10 games.

Ten of the Legends 13 South Atlantic League opponents will visit for at least one series.

“We couldn’t be more excited about the 18th season of Legends baseball for Lexington in 2018,” said Legends President/CEO Andy Shea.   “We encourage fans to make their summer plans early, especially for group outings, and join us at Whitaker Bank Ballpark next season.”

The Legends offer a variety of ticket plans for every type of fan, which are all on sale now. Company and group outings may be booked now as well. Individual game tickets will be available for sale in December. For more information, call the Legends Box Office at (859) 422-7867 or visit www.lexingtonlegends.com.