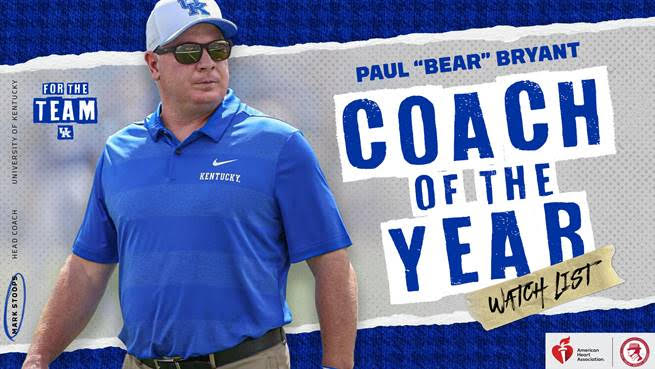 Kentucky head coach Mark Stoops is one of 21 college football coaches named to the American Heart Association’s 2021 Paul “Bear” Bryant Coach of the Year Award watch list, announced by the American Heart Association and the Bryant Family today. The award is given annually to a college football coach for contributions that make the sport better for athletes and fans alike by demonstrating grit, integrity and a winning approach to coaching and life — both on and off the field.

The American Heart Association, the leading voluntary health organization devoted to a world of longer, healthier lives for all, and the Bryant family present this award annually to celebrate Bear Bryant’s legacy and raise awareness and critical funds for research to eradicate cardiovascular disease and stroke, leading causes of death globally. The football coaching legend died from a heart attack in 1983.

Stoops has done a remarkable job in his ninth season at Kentucky, starting the season at 6-0 for the first time since 1950 and leading the Wildcats to top-15 national ranking.

Off the field, Stoops is a staunch supporter of the Kentucky Children’s Hospital, helping raise more than $2.25 million for the kids.

The Coach of the Year will be announced live from Houston’s Post Oak Hotel on Wednesday, January 12, 2022, during the awards ceremony with proceeds benefiting the American Heart Association. The Coach of the Year award is voted on by the National Sports Media Association, current NCAA College football coaches, former Coach of the Year Award winners, the Bryant Awards’ Executive Leadership Team and the Bryant Family. The award is the only college coaching honor selected after all postseason bowl games and the National Championship have been played.

“These coaches inspire and lift hearts on the field of play and in everyday life. We congratulate them on being named to this exceptional and elite list,” said Lee Tillman, Marathon Oil chairman, president and CEO. “Alongside the Bryant family, we are pleased and proud to support the lifesaving mission of the American Heart Association while carrying on the enduring legacy of Coach Bear Bryant.”

Fans can follow Paul “Bear” Bryant Award finalists, track progress of the awards and be among the first to know who is named Coach of the Year at facebook.com/bryantawards or twitter.com/bryantawards. To attend the exclusive, VIP experience for the Bryant Awards, contact 832-918-4009 or visit bryantawards.org.